Among the few watches released last year that still linger with me today is the Serica 4512. A massively charming field watch packaged into a small but confident case strung together with a bonklip bracelet. You might imagine my excitement when the brand’s co-founder and lead designer, Jerome Burgert, shared news that they were working on a diver with the same core philosophy. Meet the Serica S617 reference 5303, a diver’s watch with broad aspirations to work above sea level as well as it will below. 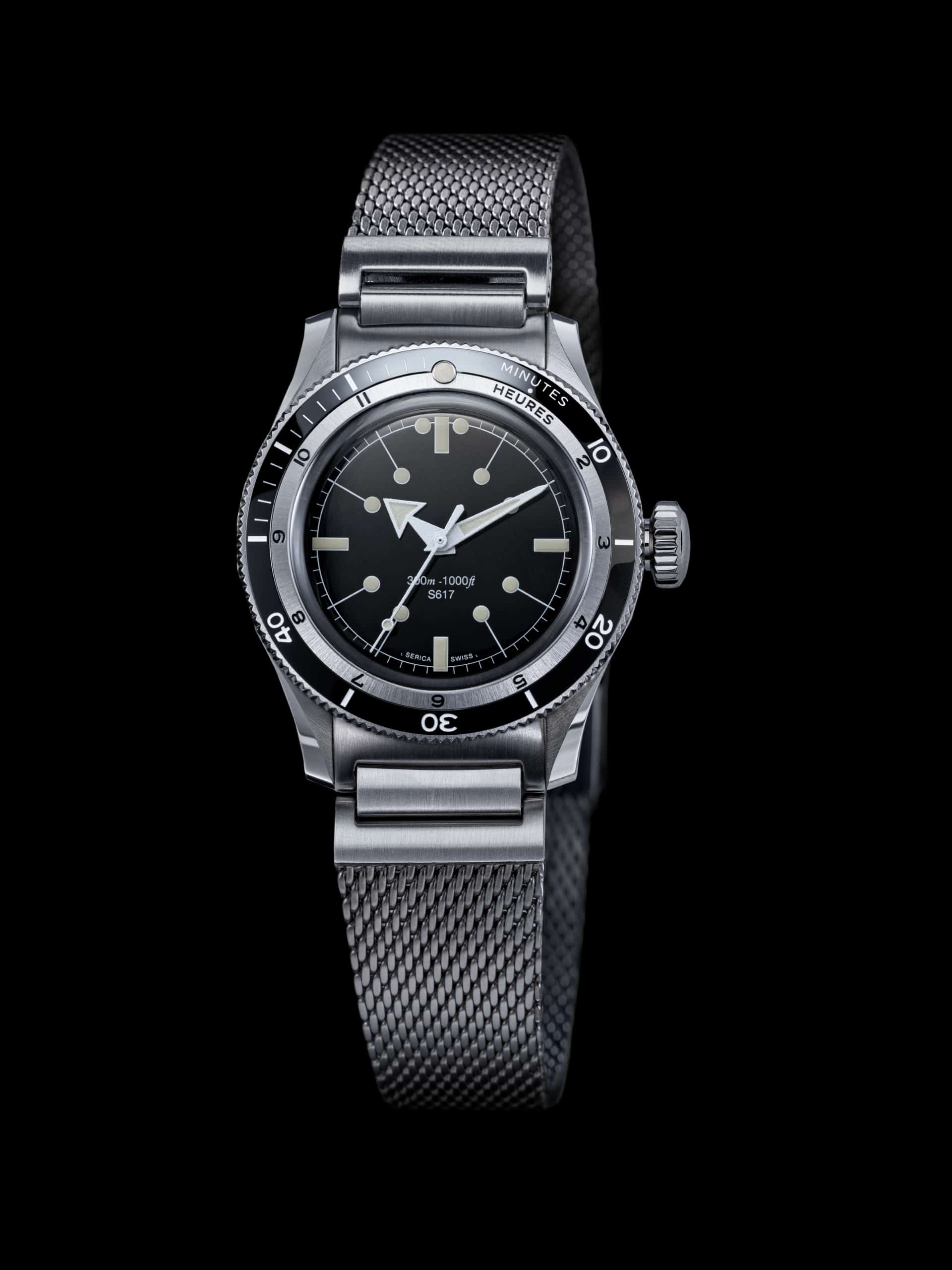 I love dive watches, and we see our fair share around here. They often stick to the same tried and true formula of what a dive watch should be: highly legible, capable, simple, with a rotating bezel. We don’t see much deviation from this formula and as a result, today’s dive watch scene feels relatively homogeneous in nature. The 5303 deviates enough to feel like a (very welcome) breath of fresh air. It immediately stands out as something a bit different, and the more you look, the more little details you’ll discover. The first thing I noticed with the 5303 was the odd bezel. It’s split into two sections, with a black portion at the outer edge, and a brushed steel portion comprising the inner edge. While not novel to this Serica, it’s a rarely seen execution that brings a curious look to the watch taken as a whole. In the 5303 the outer track gets a 60 minute gradation as you’d expect, while the inner track, which is a bit thinner, receives a 12 hour track to serve as a dual time zone hack. The dial itself is about as sparse as you’d expect with a diver, with a chapter ring at the edge and circular hour plots sat atop long indexes. The design is a little unusual in how it places the hour markers so far inland, but they meet the tip of the short, squat hour hand. The top of the dial remains sterile, with the brand placed alongside the word “Swiss” at the very bottom of the dial. At 6 o’clock you get the depth rating, and the S617 label, a name given to the watch in honor of a the retired French submarine, le téméraire (the brave one). The steel case measures 39mm in diameter and 12.2mm in thickness (including the domed sapphire), with a total lug to lug distance of 46.5mm. No complaints there. The lugs themselves feature a twisted design with a mix of polished and brushed surfaces, bringing a beautiful flourish reminiscent of the Speedmaster. The added bit of flair helps the watch feel well adjusted out of water should you decide to pair with something more formal than a dive suit. Just like we saw with the 4512, Serica is making a statement with the bracelet. The 5303 gets a steel mesh bracelet, which is nothing unusual for a dive watch, but the end link at work here pushes it over the top. A solid end link fits between the lug, with a link connecting it to the mesh portion. That link has two points of articulation which should allow for a more comfortable experience on wrist, and the resulting aesthetic is quite distinctive and is something I suspect will divide enthusiasts (as anything different inevitably does). If the look doesn’t bag your badgers a leather strap is also an option. Serica is using a Soprod Newton automatic movement for the 5303, a caliber introduced just last year that features a full balance bridge to support the balance mounted at 6 o’clock, along with 44 hours of reserve and an impressive regulation that should keep the watch between +/1 4 seconds a day. The Serica 5303 is a dive watch that takes some chances, and in my estimation they pay off. This is a unique watch that takes well considered inspiration and pieces it together in a wholly original manner. There are clear dive watch intentions here but a few design choices further blur the boundaries between the arbitrary genres we sometimes like to fit these watches into, and it’s a template I’d like to see followed more often. The Serica 5303 is priced from $1,200 and will be offered with white and black dial options. Pre-ordering is open today with deliveries expected to commence this August. Serica.