In June of 1970, a CH124 Sea King was involved in a rescue mission about 150 kilometers off the coast of Halifax, Nova Scotia. The Sea King, a twin-engined anti-submarine warfare helicopter flown by the Canadian armed forces for more than 50 years, has come to occupy a special place within the lives and shared history of the men and women who worked on them, relied on them, and told stories about them. What happened that June 49 years ago, when the Sea King was still a relatively new addition to the Canadian Armed Forces livery, is just one of those stories, but it’s indelible.

A mixed crew of four boarded a Sea King on that Friday afternoon and headed out in search of some Canadian fishermen that had been set adrift when their ship was cut in half by a Russian trawler. This event made news earlier in the day, but a mix-up in the distress call led to the Navy searching where there was nothing to be found. With a renewed sense of urgency, our crew in the Sea King found their fishermen a few hours later, scooped them up, and headed home. 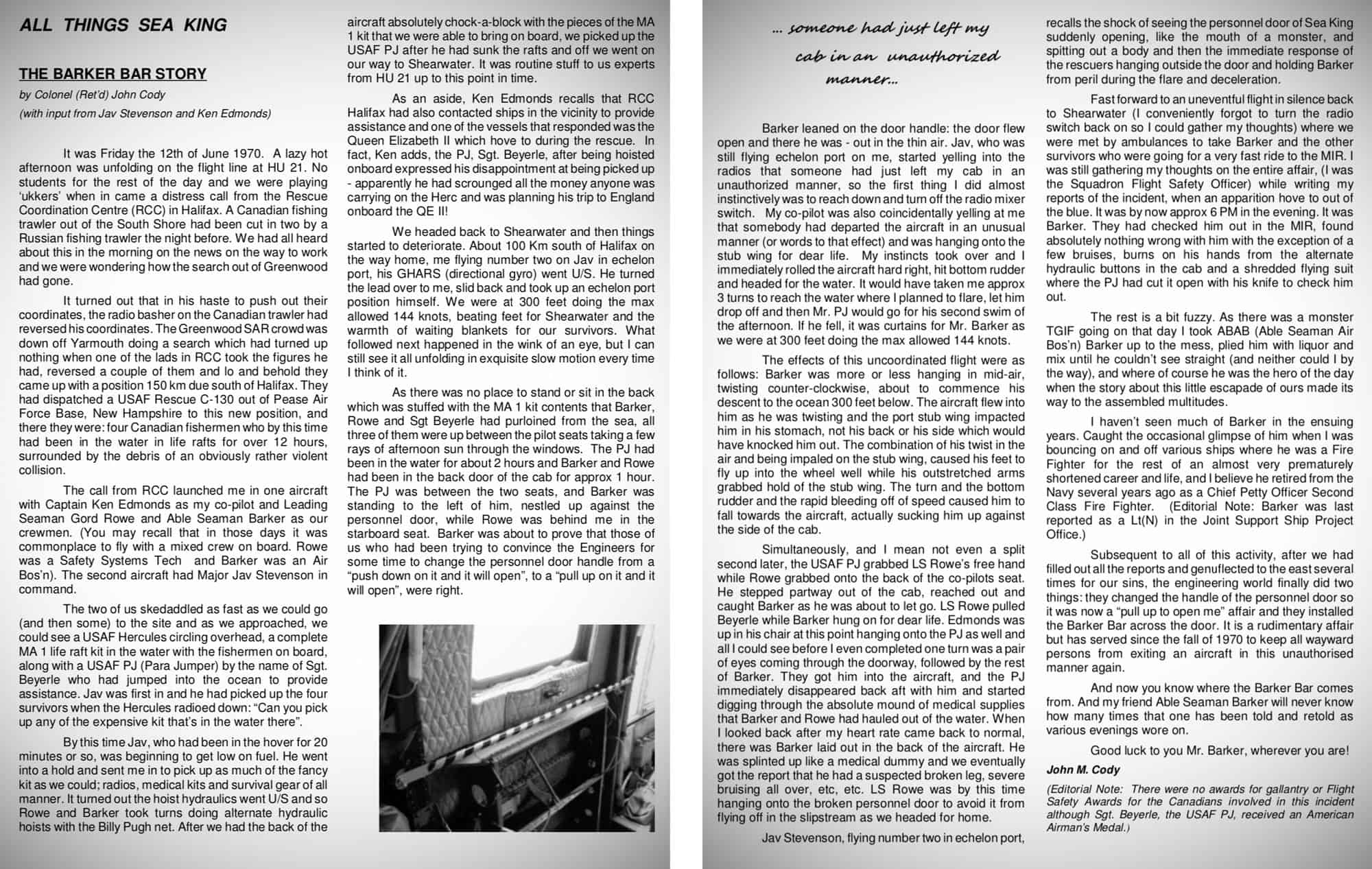 Everything was routine and going according to plan. In a moment, though, chaos broke out on board, throwing all on the CH124 into survival mode without warning. A certain Able Seaman Barker, standing next to the personnel door of the aircraft, inadvertently leaned on the “push down to open” handle that controlled the door, sending him flying out, too close for comfort to the Atlantic Ocean below. Thankfully, due to the quick maneuvering of the Aircraft Commander and some good old fashioned dumb luck, Barker did not plunge to what would have likely been a cold death in the ocean, but was bounced around the outside of the Sea King, his lower body winding up trapped in the landing gear wheel well. Saved by the Sea King’s idiosyncratic design, Barker’s story not only became an instant classic, it inspired a modification to the design of the door (the handle became a “pull up to open”) and the addition of a safety bar across the door, nicknamed the “Barker Bar,” of course, and, years later, a very special limited edition watch. Over the course of its 55 years in service, the Sea King developed into a much beloved icon of the RCN and RCAF. It was deployed all over the world on various national and international missions, and played a vital role in domestic operations in Canada. Those who spent their days flying on and maintaining the aircraft often felt a real connection to it, and when it was announced that the helicopter would be permanently retired from service by the end of 2018, Air Combat Systems Officer Jason Miller, who spent four years on Sea Kings as a Tactical Coordinator and Maritime Helicopter Crew Commander, came up with an idea to pay fitting tribute to this unique piece of Canadian military history. “I conceived the project in Spring 2016 while sailing aboard the now decommissioned HMCS Athabaskan,” Captain Miller told me, via email. “The news of the CH124 Sea King’s retirement in December 2018 was fairly current and I thought a watch to commemorate its service to the RCN, RCAF, and Canada would be a fitting tribute.”

With their connection to aviation, Sinn became a logical choice for the partnership, and Captain Miller went to work on the design. The 556A, a simple tool watch, emerged as the canvas for Miller’s tribute. Miller sees a shared DNA between the 556A and the Sea King. “It was always about reliability, durability, function, and execution,” he says of the aircraft, and the watch. Handling his creation, Miller recalls that it feels like a “brand new Sea King, fresh from the factory.” The Sinn 556A Sea King LE is limited to just 55 pieces. Available through Watchbuys, Sinn’s American distributor, the timepiece is already sold out, a fact that while disappointing to many of us just learning about the watch now, is hugely gratifying to Captain Miller, who saw this project as a labor of love, took on much of the marketing himself, and, proudly, made sure many of the watch’s new owners are part of the Sea King family in some way.

The most distinguishing feature of the limited edition version is easily the Barker Bar seconds hand. “It was my job to ensure the Barker Bar was in place for every flight,” says Captain Miller. Incorporating such a key piece of Sea King lore into the final version of the watch seems like a no brainer, and the result here is something that is not only incredibly distinctive with its black and yellow striping, but also meaningful. The dial features an image of the Sea King directly above 6:00, and a grey-on-grey dial that utilizes color tones similar to late model CH124s. The automatic winding rotor, visible through the see through caseback, features the aircraft designation, years of service, and a unique engraved serial number, all in the font used on the Sea King itself. To commemorate 55 years of service, 55 was chosen as the limited production number.

Miller, naturally, chose #1 for himself. “I miss my days on the Sea King quite regularly,” he says. “Whether I was hunting submarines, conducting maritime surveillance, or just coast crawling around the maritimes, it was an amazing aircraft to fly. At a minimum, this watch helps take me back to those days.”

More information on the now sold out 556A Sea King LE can be found here.

Canadian Aerospace Power Studies, Volume 5 was consulted for resarch on this article, and it can be found here.

A thorough account of the “Barker Bar” story can be found here.

Author Zach Kazan
Zach is a native of New Hampshire, and he has been interested in watches since the age of 13, when he walked into Macy’s and bought a gaudy, quartz, two-tone Citizen chronograph with his hard earned Bar Mitzvah money. It was lost in a move years ago, but he continues to hunt for a similar piece on eBay. Zach loves a wide variety of watches, but leans toward classic designs and proportions that have stood the test of time. He is currently obsessed with Grand Seiko.
Categories:
Featured
Tags:
Sinn 556a
Related Posts
Article / Featured