When I was a kid — maybe eight or so — I received my first watch for my birthday. It was a gray, plastic piece with an LED display, and it was the coolest thing ever. There began my love for watches, and since then LED watches have held a special place in my heart. Around the time I received my plastic LED watch, which was the late 1970s, Bulova released their now classic Computron LED drivers watch.

The Computron drivers watch had a unique rectangular case with the LED display off to the side facing up at an angle so as to be readable without having to turn your wrist towards your face, especially while driving. It has since become a cult classic that is highly sought after by collectors. However, the hard part of collecting vintage LED (and LCD) watches is that they are very finicky as far as the actual electronics are concerned, and repairing them is often difficult. Fast forward to this year’s Baselworld where Bulova has re-introduced the Computron through their Archive Series. This has to be the coolest watch by far at the show this year. The Computron will be available in three variations: gold plated head with a red LED and matching gold plated bracelet; black IP with a red LED and black rubber strap; and stainless steel with a blue LED and steel bracelet. Now, as cool as the traditional red LED displays are, the blue display in the steel case is simply a stunning combination. The rectangular case of the vintage model is about 30mm wide by 40mm long, and the new one looks to be a similar size, although as of this writing those specs are unavailable.

As far as the overall design is concerned, it definitely does the historical model justice. The trapezoidal/rectangular case retains the shape of the original, while adding ridges that honor the original cross-hatched finish without making things too busy. The LED display glass shows the Bulova logo in the lower right corner, and Bulova even put the little quartz crystal symbol here just like the vintage one had (a great touch, in my opinion, and I think a nod to those who remember the originals). And, like the original, you have to push the button crown on the right side of the case to display the time. This updated version also has a dual time zone capability. Pushing the button sequentially displays the hours and minutes, the seconds, the date, day, and then the dual time zone. By now, we all know the heritage craze is basically all gas, no brakes, and as a vintage fan I’m all for it. Some companies have been doing it better than others, and I think Bulova is trying their best to be in the former group. Last year’s Devil Divers were very well done, and were a huge hit with collectors. This year’s Computron is a grand slam, and it could very well be the surprise gem of Baselworld. 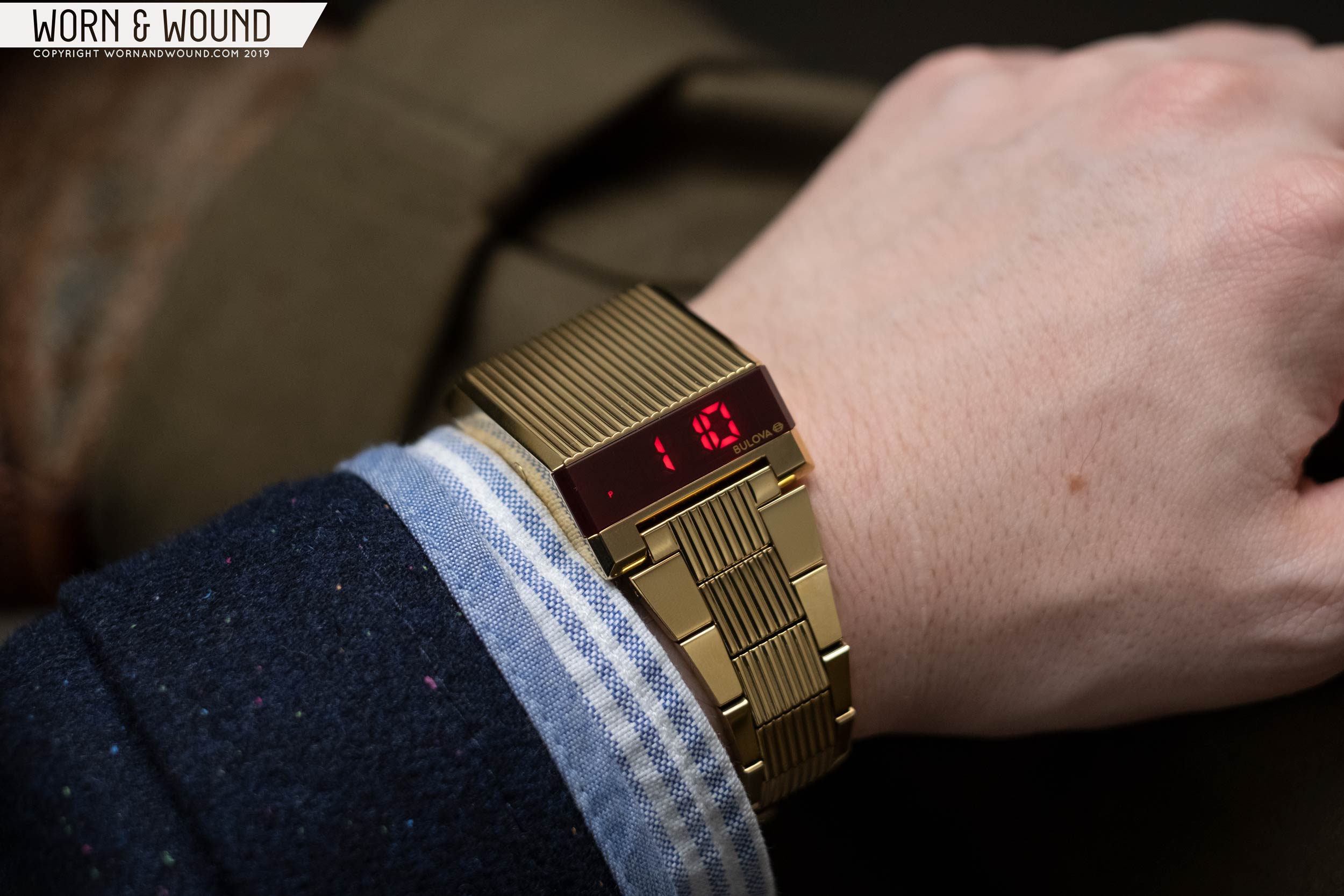 Retro is in, and LED is as retro as it gets. The Computron’s old-school LED aesthetic will really pull at the heart strings of collectors like myself that were awed by the futuristic looks and high-tech aspect of LED watches from our childhoods and adolescence. The best part is that Bulova has priced these quite reasonably, with the gold version at $395, and the black and steel versions at $295. At this price point, this is a heritage watch that will be accessible to all collectors. As much as I love all the heritage watches released year after year, I rarely end up buying them. However, this is a model that speaks to me and I will definitely be sporting one on my wrist when they come out this fall. Bulova

Author Christoph McNeill
Christoph (Instagram’s @vintagediver) is a long time collector and lover of all things vintage, starting with comic books when he was a kid (he still collects them). His passion for watches began in 1997 when he was gifted a family heirloom vintage Omega Genève by his step-father. That started him on the watch collecting path—buying and selling vintage watches of all sorts, with a special appreciation for vintage dive watches and Seiko.
vintagediver
Categories:
News & Releases
Tags:
Baselworld 2019bulovaComputronLED
Related Posts
Article / News & Releases

By Christoph McNeill 27.03.2015
Bulova is celebrating their 140th year in continuous business this …
Article / News & Releases