At some point, whether through creative design or unique production methods, a watch becomes more than just something that sits on your wrist and tells time. It becomes art. That’s the case for watches created by Geoffrey Roth Watch Engineering in Scottsdale, AZ. The materials, designs and manufacturing processes set the watches apart from many in the luxury watch market, and that’s exactly what Roth said he was going for when he started making watches in the early-2000s.

“We look at every little detail as a place to work in new materials or something that is visually appealing,” Roth says.

Roth, an experienced jewelry designer, spent two-and-a-half years sourcing out all the Swiss-made parts for his first watch–the HH1. Released around 1999 to 2000, Roth sold the 110 HH1 pieces out of his shop in Sedona, AZ.

After the success of his first run, Roth approached the Swiss companies that helped make the HH1 come to fruition to make a second watch. But after several months nothing had progressed. The wait seemed excruciating. Roth began wanting more flexibility and control over future watch models. That meant making parts of his watches in-house, an expensive and time-consuming process not many can take on. But in 2003, Roth decided that it was the only way forward.

The first big purchase was a CNC machine to produce his own watch components. He learned how to run the machine over time, adapting his hand-drawn designs into cases and dials. The first watch produced with in-house parts was the HH2, which was similar to the HH1 but with some aesthetic improvements. The amount of options offered at such a high level of execution is stunning for a company that was producing its first in-house parts. The base price for the HH2 was $5,700.

“The feel, the look of different materials is exciting to work with,” Roth says. “My early and ongoing ideas with my watch are to produce something that isn’t your [typical] stainless steel case with a movement and interesting looking dial. I see the entire watch–the shape of the lugs, the side profile of the case, every single little detail. [It] makes a difference to the end user.” 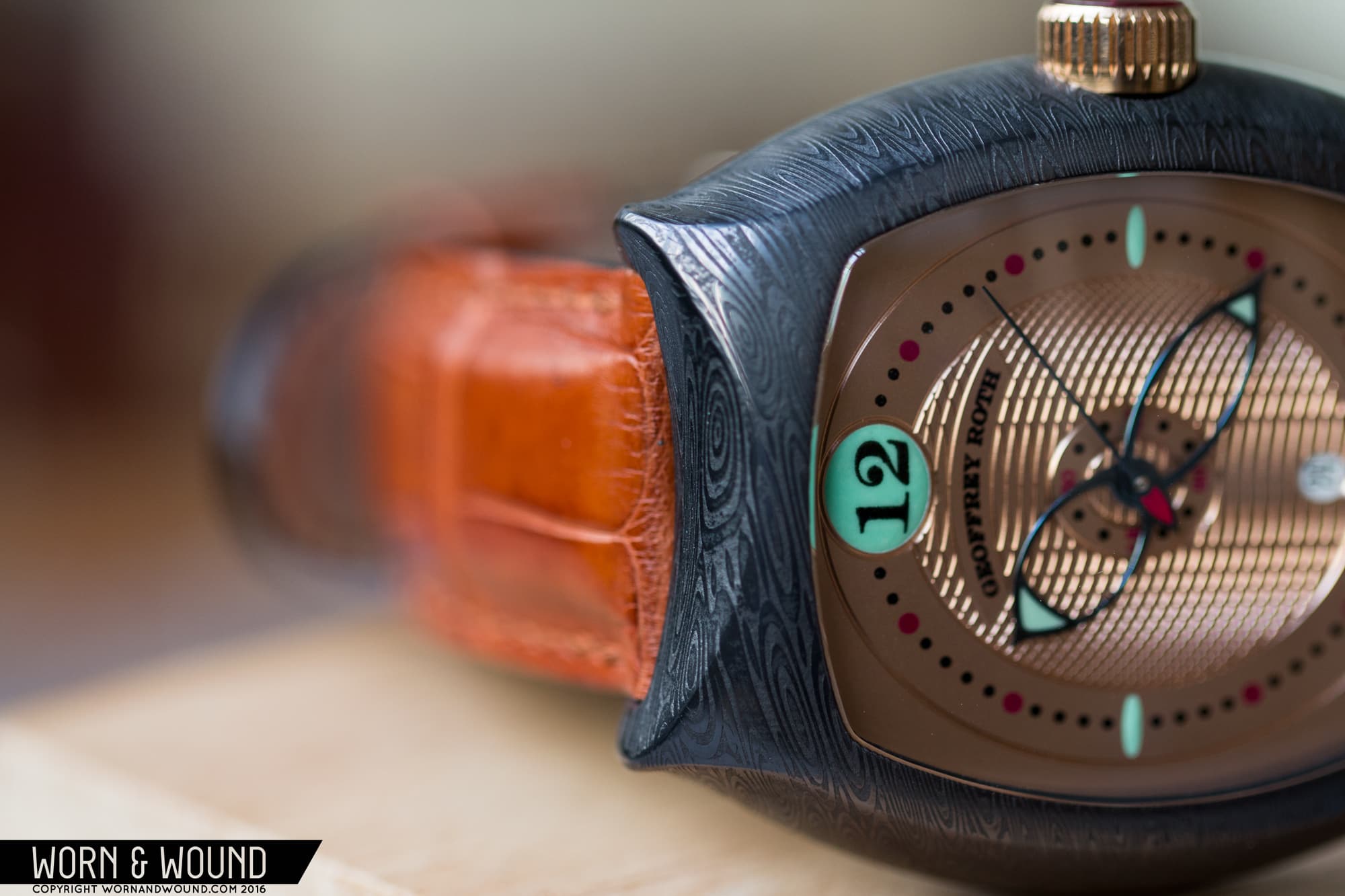 One of the most exciting materials Roth is working with is Damascus steel, which is made by hammer-welding strips of steel and iron followed by repeated heating and forging. It produces a wavy surface pattern on the steel. Few watch brands have embraced the material. Roth says he began working with the material after finding that knifemakers and craftsmen had elevated the creation of Damascus steel over the past 20 years.

“Our focus is not just producing watches, but using all of the interesting materials out there that we can find,” Roth says. “Anybody can do a simple case. I call my case an “engineered sculpture.” I envisioned the watch case being a piece where the entire case, lugs and all, is sculpted out of one piece of material.”

Nearly every component of the watches is touched by a Roth-designed piece. Even the ETA 2892 movement features a tungsten rotor made in the studio. Roth is constantly looking at ways to improve on the watches he’s designing. Take the crown, for example. You’d think a gold-plated crown with a synthetic ruby manufactured by a respected company would be good enough. It was featured on his HH1, HH2 and HH3 watches. But no, Roth wanted to change how it was made. His HH4 and HH5 watches were made with in-house components. 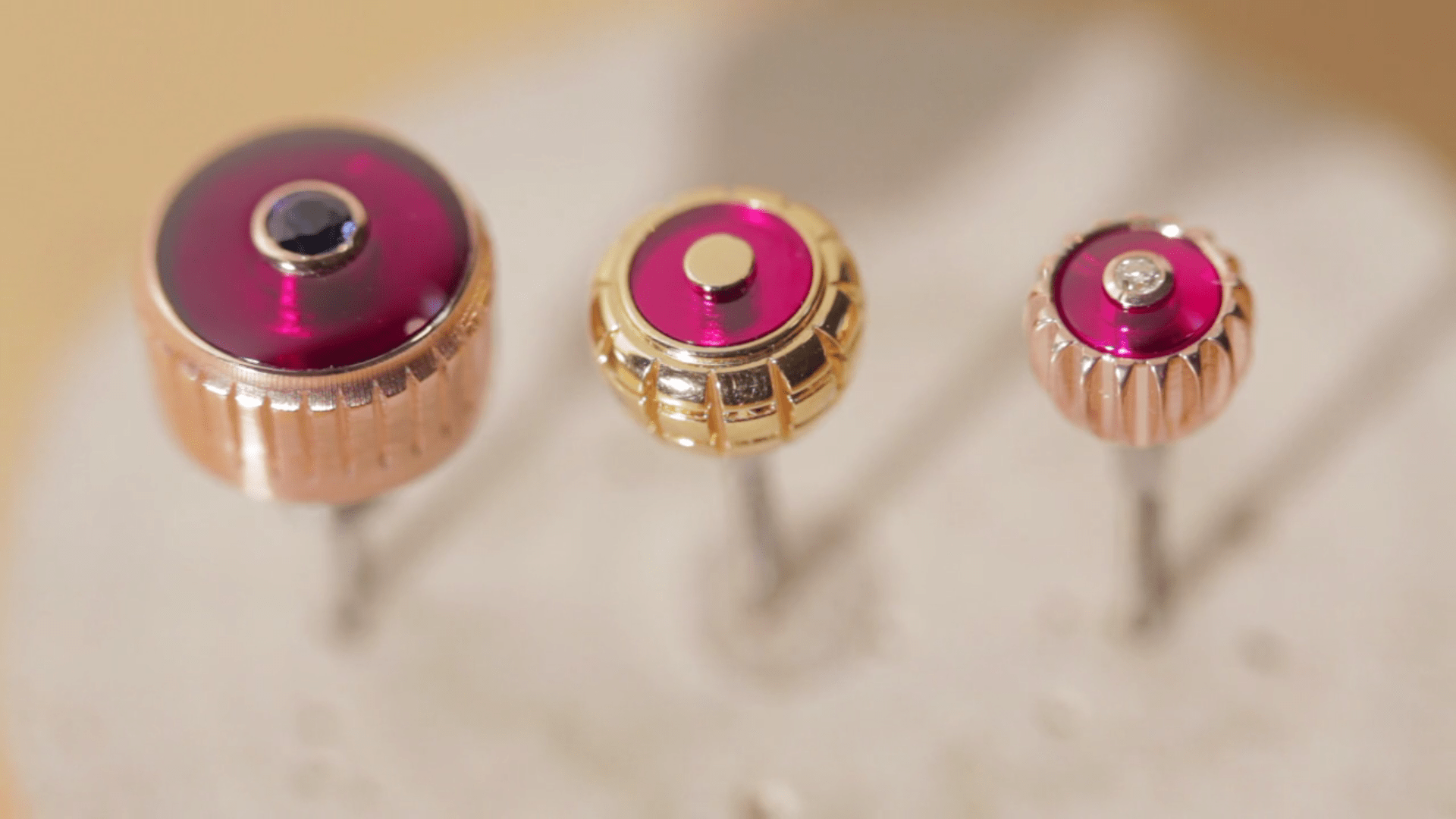 “We buy a very high-quality, triple-seal screw-down crown and we sleeve that with bronze, stainless steel or gold and then set our ruby. Then we set the centerpiece in the ruby,” Roth says. “One of these days we will buy a small turning machine so we can make our crowns from start to finish.” Oh yeah, Roth also gold leafs the bottom side of the ruby so that there’s a “wondrous effect” when the light hits the crown. It’s a tiny detail that few will ever realize. But it’s there.

Roth says the long-term goal is to design and produce their own movements. The dream, he says, is to develop a double-barrel, eight-day caliber for future watches. That may take some time.

“I expect that one will be a couple of years,” he says.

While some big things might be some years away, others are just around the corner. Roth says he is producing a new diver’s watch. His plan is to develop a sport watch that could morph into any number of designs later on. His design could later be used to create watches that took on pilot, racing and yachting aesthetics. The problem is there are a lot of design elements that are on most dive watches–a rotating bezel, luminescent indicators and an easy-to-read dial. So how can Roth include those elements into his watch and retain his signature styling? By innovating. “We have a patent-pending system on our uni-directional bezel that is totally silent, it’s as smooth as silk like a camera lense with no backlash,” Roth said.

The first piece has been completed, Roth says, and he plans to assemble the final iteration of the watch in the coming weeks. An official launch date has yet to be announced on the new dive watch. “We get excited about trying to think outside the box and not just create another watch that looks like the original HH2 with some little changes,” Roth says. “Eventually, we’ll have a breadth of models that will have elements of Geoffrey Roth.”

Author Christian Alexandersen
Christian discovered his love for watches around the same time he discovered he could make a living as a writer. An award-winning journalist, Christian has covered everything from presidential campaigns to princess tea parties. Now, he's combining his passion for vintage watches with his passion for writing. Christian lives and works out of central Pennsylvania.
CRAwriter
Categories:
Interviews
Tags:
Geoffrey Roth
Related Posts
Article / Guides

By Zach Weiss 12.06.2011
The watchcase is the housing that contains a watch’s movement; …
Article / Featured