I find a certain undeniable appeal in a well-designed quartz chronograph. Some watches are appealing strictly as mechanical objects, and obviously the quartz chrono doesn’t fall into this camp, but if you have room in your heart for good design on a bargain and can embrace the movement, then there’s a lot of value packed into watches like the one we’ll be talking about today, the Hamilton Khaki Aviation Pilot Pioneer Chrono Quartz. 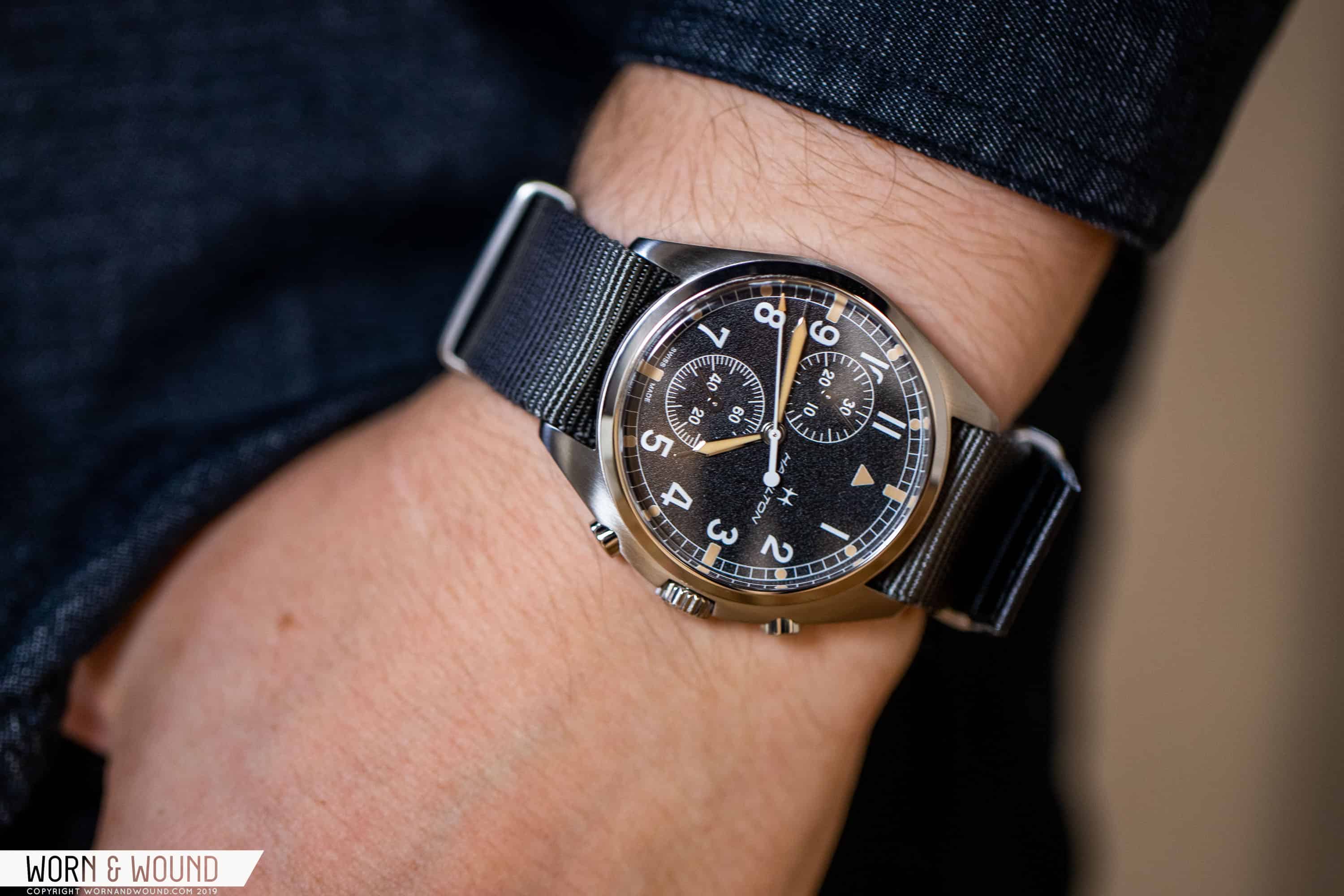 Let’s say, hypothetically, you’re the type of watch guy who loves old chronographs. Not for their precision timekeeping or mechanical wizardry, but just based on looks alone. You could spend tens of thousands of dollars on hyper rare military chronographs that would, quite honestly, be difficult to wear on a count of their ability to induce massive amounts of anxiety that a knock or bump will throw the mechanism into a tailspin. Watches like the Pilot Pioneer Chrono Quartz are made for the collector who simply wants the look and feel of something, but can live without vintage watch-related panic attacks. 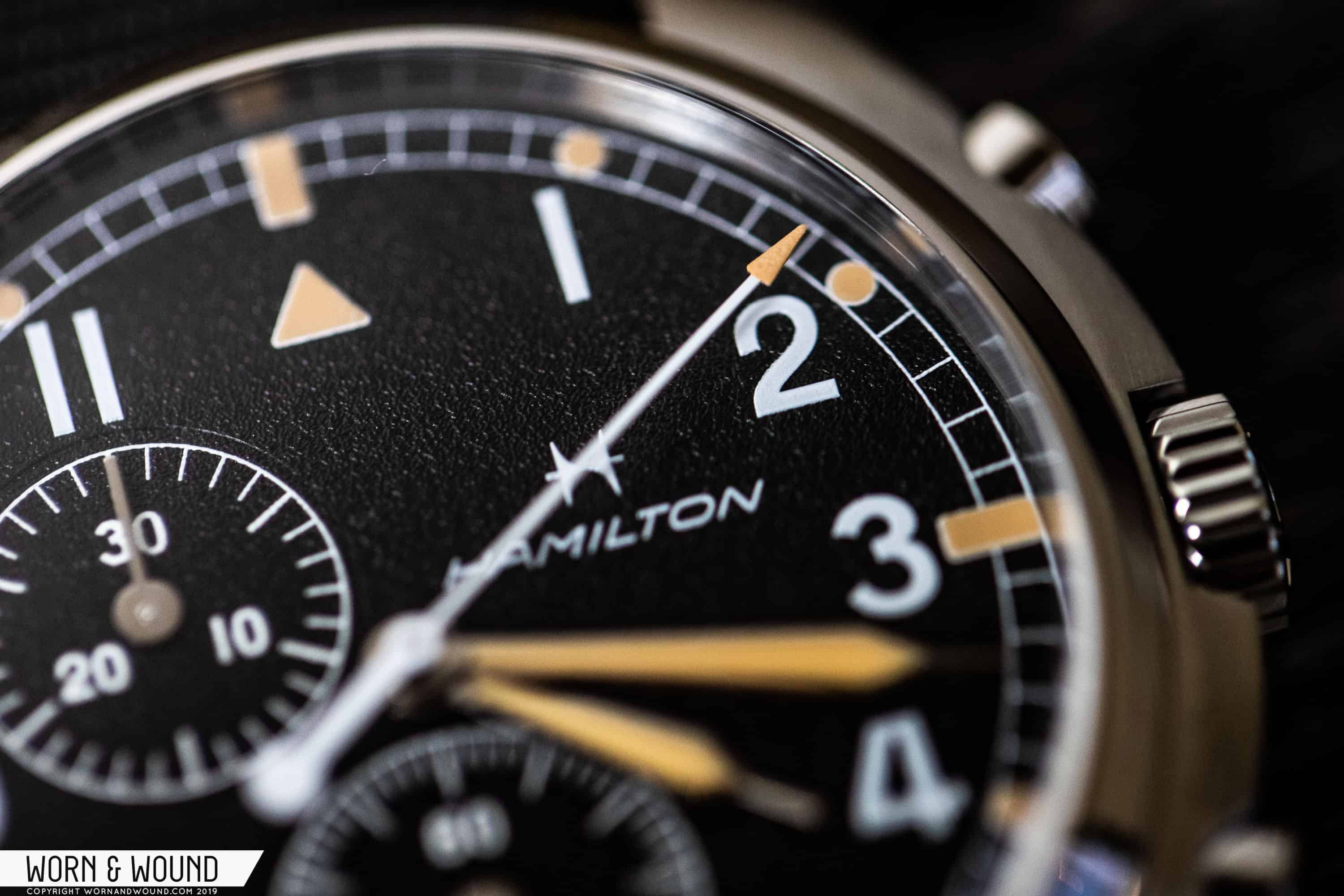 Of course, this type of watch calculation has been made by watch companies over and over again over the last several years during the vintage craze that we’re still very much in the midst of. But what you get with the Hamilton isn’t just a cheap substitute for something rare that can pass from 20 feet away. Hamilton is a real watchmaker, and even in their lower priced products, and even with their quartz products, they find ways to impress with finishing and build quality beyond what you would expect. The Pilot Pioneer Chrono Quartz, for example, has impressive alternating finishes. The bezel is highly polished, which is a great period touch, while the case finishing is dominated by brushed surfaces.

The dial has a texture that is reminiscent of the W10 reissue that Hamilton launched last year, and really the whole watch can be seen as a companion piece of sorts. While the Khaki Pilot Pioneer Mechanical is a near remake of the original military issued watch it’s based on, the Pilot Pioneer Chrono Quartz isn’t adhering to a specific model, but more of a style. The railroad style minutes track and bright white Arabic numerals put this squarely in vintage aviator territory, and the asymmetric dial layout gives the watch, to my eyes, a tool-ish, instrument like look. This watch has plenty of radium colored lume, so if you’re opposed to faux-tina, this won’t be for you, but given what the watch is going for, I think it’s totally appropriate and has been executed rather well. While good looks are subjective, I don’t think it can be argued that the Pilot Pioneer Chrono Quartz does a nice job doing what it set out to do, which is provide a reasonable facsimile of something much older but built to modern tastes and standards. As for the quartz movement? It keeps costs down, of course. If a mechanical chronograph from Hamilton is what you’re after, there are plenty of options, but this is something a little different, for a different customer or collector. It achieves a certain vintage inspired charm, but adds a ton of practicality and affordability into the mix as well. Hamilton

Author Zach Kazan
Zach is a native of New Hampshire, and he has been interested in watches since the age of 13, when he walked into Macy’s and bought a gaudy, quartz, two-tone Citizen chronograph with his hard earned Bar Mitzvah money. It was lost in a move years ago, but he continues to hunt for a similar piece on eBay. Zach loves a wide variety of watches, but leans toward classic designs and proportions that have stood the test of time. He is currently obsessed with Grand Seiko.
Categories:
FeaturedWatches Under $1000
Tags:
Hamilton
Related Posts
Article / Featured

Now in the Shop: The Hamilton Khaki Pilot Pioneer Mechanical

By Windup Watch Shop 01.10.2019
Just about a month ago, Hamilton Watches announced the latest …
Review / Vintage