New Zealand-based Magrette is no stranger to worn&wound. Way back when, we took a close look at the brand’s Regattare 2011. It was then and remains today a conceptually interesting watch, one that obviously pulls inspiration from some well known references and yet manages to deliver a fresh, value driven-package. Since then Magrette has grown by leaps and bounds, releasing numerous models—all variations on a theme, no doubt—with enough in the mix to grow a broad and loyal fan base. 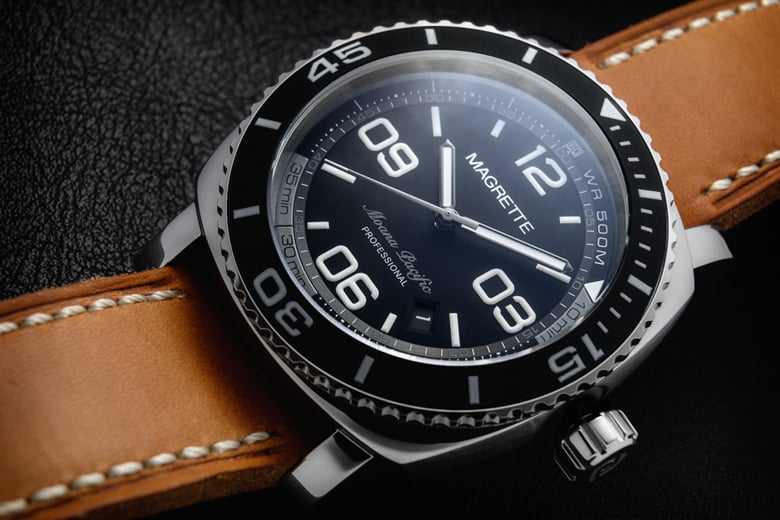 One of Magrette’s most popular collections is undeniably the Moana Pacific Pro. First introduced in 2013, the Moana Pacific Pro is a cushion-cased, professional (hence, the name) diver boasting a whopping 500-meter depth rating. Paired with the impressive build quality are solid aesthetics and use of color, building on a Panerai-esque template to create a watch that’s sportier and more fun.

Magrette’s back with their most recent expansion of the MPP family with the Moana Pacific Professional Black. Featuring largely the same specs as its predecessors, the Black deviates from the pack in a few ways. First, it takes a more subdued approach with its use of color, featuring a tonal design of black, white, and grey. Second, it swaps out the ceramic bezel insert for a metal one featuring a black DLC finish. And finally, the watch is powered by the STP1-11 automatic caliber, which replaces the previously employed Miyota 9015. Some background on the movement. STP, or Swiss Technology Production SA, is a Swiss movement manufacture that began operation in 2006. More significant, however, is the firm’s acquisition by Fossil Group in 2012, the same year that STP began serialized production of its base STP1-11 caliber (a 2824 clone) out of its headquarters in Manno, Switzerland. We’ve seen the movement powering numerous watches from brands owned by Fossil Group, most notably in pieces by Zodiac. But beyond that, we’ve also started to see the movement appear in a handful of micro brew projects. It’s an exciting proposition for those who are both value conscious and want more variety beyond Seiko/Miyota calibers, which have dominated the micro-brand world since ETA first cut back sales of its calibers. The Moana Pacific Professional Black is currently available for pre-order at $545, with an initial $200 deposit (refundable at any time). The price will jump to $645 when the project is completed. The expected completion date is February 25, 2017.

For more information or to place an order, visit Magrette.

Author Ilya Ryvin
Ilya is Worn & Wound's Managing Editor and Video Producer. He believes that when it comes to watches, quality, simplicity and functionality are king. This may very well explain his love for German and military-inspired watches. In addition to watches, Ilya brings an encyclopedic knowledge of leather, denim and all things related to menswear.
ryvini
Categories:
News & ReleasesWatches Under $1000
Tags:
MagretteSTP1-11
Related Posts
Article / Featured

By Zach Weiss 23.03.2012
Magrette just announced the release of two chronographs to their …
Review / Featured