The rumblings on the internet had been growing louder in recent weeks: a new Snoopy Speedmaster would be coming. This, perhaps a bit strangely, has become as big an event as there is on the new watch calendar. The previous Snoopy dialed Speedmaster has become a collectible that rivals some of the most prized vintage Speedmasters, fetching prices several multiples higher than its original retail price when introduced on the second hand market. So today’s announcement was met with a certain amount of anticipation, and less surprise, from the Omega faithful. Omega’s latest has the same whimsical feel you’d expect from a watch with a cartoon beagle on the dial, but incorporates some real technical advances as well, that could tell us a bit about the future of the moonwatch. Let’s get into it. Officially, this watch is part of the Moonwatch Anniversary Series, and is the “Silver Snoopy Award” 50th anniversary tribute watch. The Silver Snoopy is an award given by NASA in recognition of advances in safety in space exploration, and Omega was presented with the prestigious honor in 1970 following the rescue of the Apollo 13 astronauts from their ill fated mission.

What we have here is the 42mm stainless steel moonwatch that we’re all familiar with, but with a commemorative dial and some new tech under the hood. Of course, we have Snoopy in a space suit in the running seconds sub register at 9:00, with a “50th Anniversary” designation. Those sub registers, along with the bezel and stick hour markers, are in a vibrant shade of blue, contrasting a silver dial for a pleasing take on a panda layout. And when we say “silver,” we don’t just mean “silver colored brass.” The dial is actual silver, and has been engraved with “Ag925” below the Speedmater Professional signature. This is a nice premium touch that should be impressive in the metal. 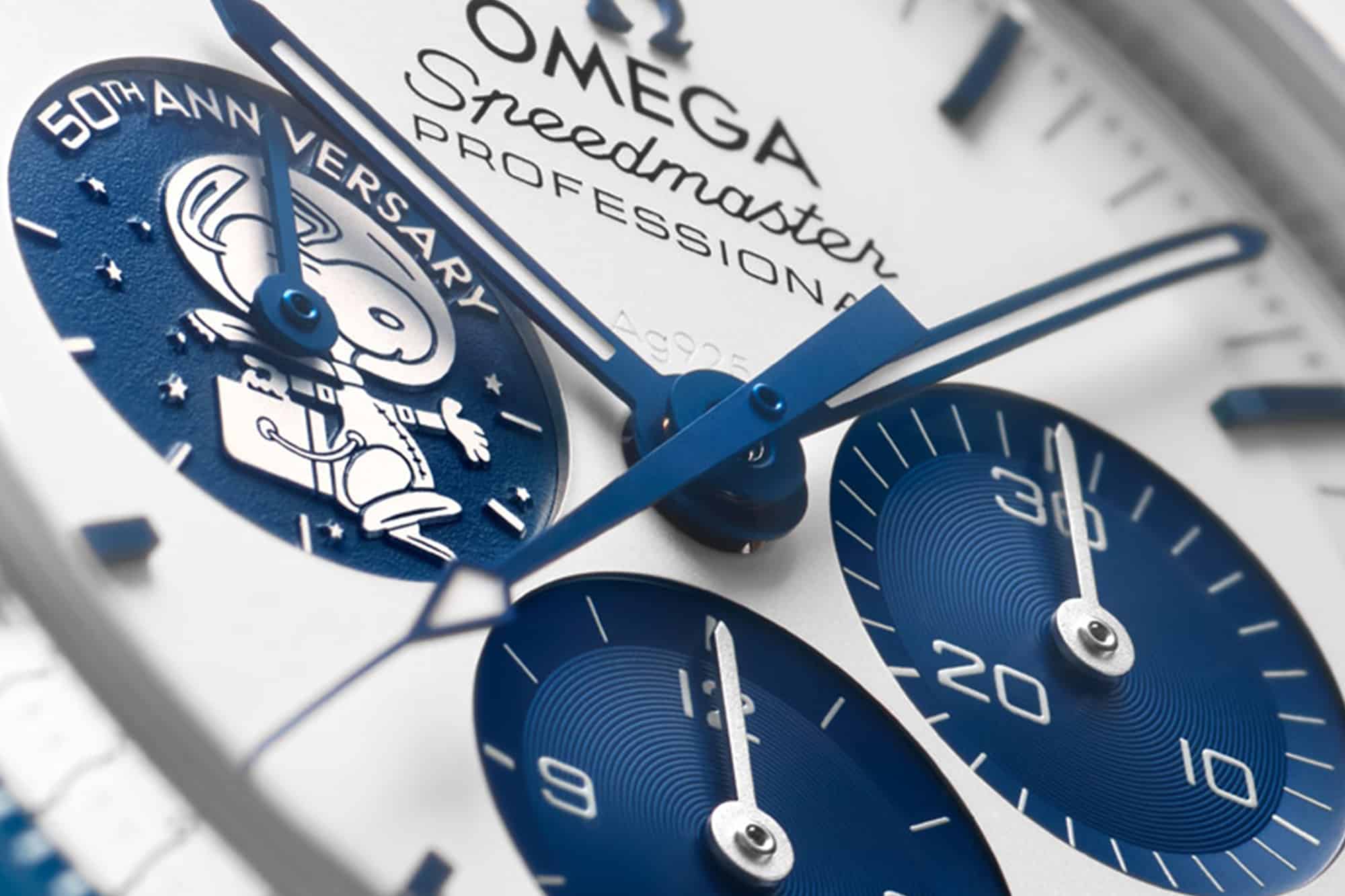 The caseback has an Easter egg that seems designed to be a conversation starter and like-generator on social media. We once again have an image of Snoopy, this time piloting a Command and Service Module. The trick here is that Snoopy’s CMS moves with the chronograph seconds hand, taking him around the dark side of the moon when the chronograph is actuated. A pretty clever effect, actually, that’s both technically impressive and works thematically with the idea behind the watch. The representation of the earth on the caseback also rotates with the running seconds hand. This anniversary watch is, as expected, loaded with premium touches that the standard moonwatch lacks. Among them is a NAIAD LOCK caseback, ensuring it screws down into the same position should it ever be removed. The hour markers are PVD coated, and the bezel is ceramic with white enamel inlays for the tachymeter scale. Perhaps most importantly, however, is the movement itself, which is Omega’s 3861 Calibre. This is essentially an updated version of Omega’s tried and true 861 movement, but with the addition of a Co-Axial escapement and METAS certification. Along with speculation that a new Snoopy watch was forthcoming, Speedy fans have been wondering since the 3861’s introduction when or if it would find its way into the most simple Moonwatch that Omega offers. This, obviously, is not that watch. But after being introduced in a solid gold Speedy over a year ago, and then included in the Apollo 11 anniversary watch, we could speculate that we’re getting closer.

The retail price of the 50th Anniversary Snoopy is $9,600, and will be available at Omega boutiques later this month. Per Omega, this watch is not a limited edition, but we anticipate they might be limited in production and generally tough to come by if previous Snoopy dialed Speedys are any indication. Omega

Author Zach Kazan
Zach is a native of New Hampshire, and he has been interested in watches since the age of 13, when he walked into Macy’s and bought a gaudy, quartz, two-tone Citizen chronograph with his hard earned Bar Mitzvah money. It was lost in a move years ago, but he continues to hunt for a similar piece on eBay. Zach loves a wide variety of watches, but leans toward classic designs and proportions that have stood the test of time. He is currently obsessed with Grand Seiko.
Categories:
News & Releases
Tags:
OmegaOmega Speedmaster
Related Posts
Article / Featured