Speedmaster, the early years. Graduation to the Professional ranks. Electronic, quartz, and other Speedmaster variations. We’ve seen a lot of the Speedmaster over the last few articles, and it brings us to the present day.

For sure, Omega knows what they have in their heritage. Along with creating new models, the last few years have seen Omega releases in the form of updates to venerable models of the past. These include several models from the Seamaster line, Broad Arrow models, the PloProf, and the Bullhead. The Speedmaster line includes the First Omega In Space homage to Wally Schirra’s Mercury Sigma7 mission watch and the new MK II. And most of these reinterpretations carry the new co-axial escapement which the late George Daniels kindly provided the horological world. 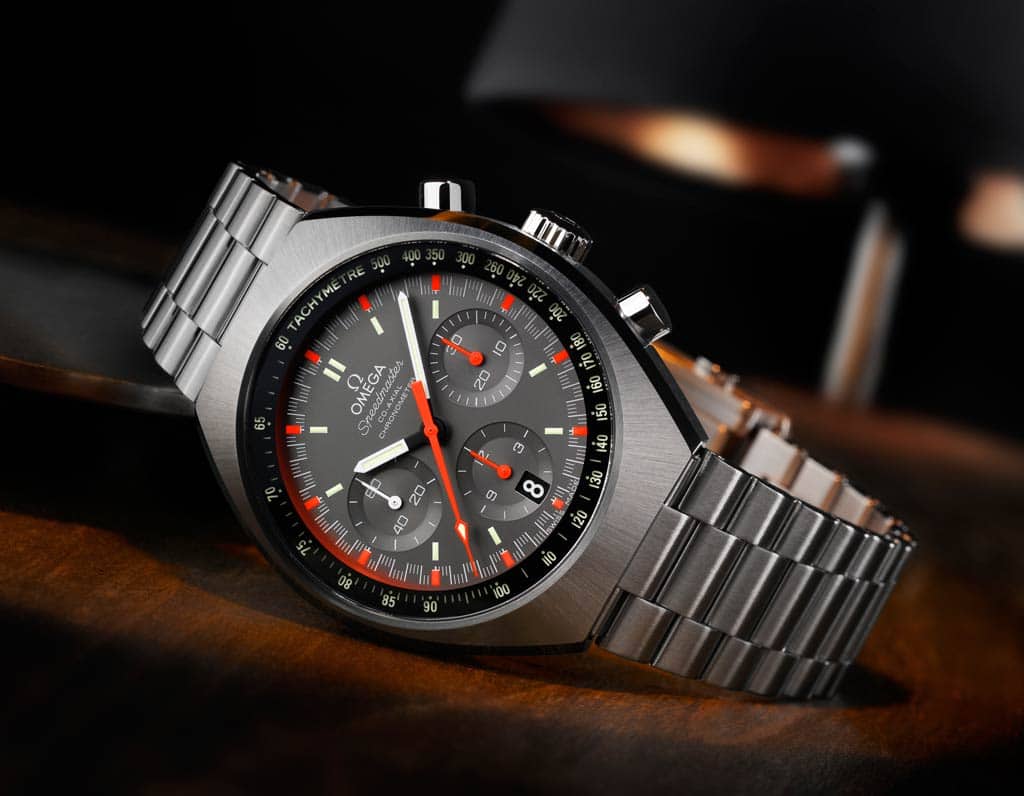 A quick check of the Omega website shows 13 major Speedmaster models. The variations total 73 different current releases when you add up dial, color, case material, strap/bracelet options, and even moon-phase. Many carrying the co-axial movement. Now we don’t want to simply recite the Omega catalogue here, but we do want to make note of a few special pieces.

There are multiple variations of the new co-axial Speedmaster–two register, three register, and GMT versions. The two-register model has chrono hours and minutes on a single sub-dial, where elapsed time is read like normal time. This is the branch of the Speedy family tree that includes the black ceramic “Dark Side of the Moon” model, which has gotten a lot of publicity lately. To make room for these new models, others which have had long production runs have reached the end of the line. For instance, the ref. 3510.50, a reduced size model very similar in appearance to the current ref. 3570.50 moon watch (and easily mistaken for it at casual glance). The 3510.50 carried an ETA 2890.02 with an added chronograph module (Omega cal. 3220) and entered production in 1996. There was a ladies version of the watch (ref. 3802.71) and they combined and morphed into a new line with an automatic chronometer Omega 3304 movement, aimed squarely at the female segment. We can tell it’s aimed at the ladies because the line includes three variations with diamonds while remaining at 38mm.

So there you have it. 73 current Speedmasters at this writing, and hundreds upon hundreds of references as you follow the bloodline back to 1957. Some Speedys took on the look of the times in which they were released. Some commemorated space missions. Some went electric, trying to keep up with the Joneses. Some glammed up with gold or platinum cases or with diamonds and pastel colored straps. Some of the young ones have even gone retro and dressed up like their ancestors. But only one Speedmaster was plucked out of a Houston jewelry store, like an unknown actress getting discovered in a Hollywood drugstore. Only one passed a grueling series of tests. Only one was strapped to the arms of bold men who perched on top of rockets aimed at the stars.

Only one went to the Moon. And only one timed the rocket burns that brought three scared, cold, hungry guys back after their vehicle damn near blew out from under them 200,000 miles from home.

Postscript
The Speedmaster Professional’s days are far from over. It’s still the only watch NASA has ever approved for Extra Vehicular Activity. And we believe the opening sequence from the movie Event Horizon, with that Speedy Pro floating through the passageways of a long dead spacecraft, is really a message from the future. Long after Armageddon, when there’s nothing left on Earth but the cockroaches and Keith Richards, the Speedmaster Professional will be standing by, ready to go to work – if only there was somebody left to crank it up.