Watches, in their variety, grasp appeal from nearly endless sources. Just think of all the things you might take pleasure in as a watch lover for any particular watch. A watch can be a unique and beautiful dial, an artifact from another time that can temporarily bring you places you’ve never been, a tool that makes your life safer, or simply an accessory that finishes off an outfit. Maybe it’s all of these things.

A watch is also a tactile and physical pleasure. Stopping, starting and resetting a chronograph. Watching the seconds hand fly around the dial in impossible to see tiny increments, with power generated not from electricity, like everything else in our lives, but through the motion of our own bodies as we wear the watch. This, in a lot of ways, is the pleasure that the Bulova A-15 taps into. The dual crowns, while ostensibly offering some added utility to time events and track another timezone, are at their core just good old fashioned fun to manipulate. If you’re constantly playing with your dive bezel in meetings, on the train, and in other places where it just doesn’t make sense, you’re going to like the A-15. But you’re also probably going to like it if you’re just a fan of military inspired pilot’s watches, which have their own charms with or without the somewhat gimmicky dial layout of the A-15. Even if you never make use of this watch’s defining feature, it more than holds up as a fun, heritage aviation piece, and coming in well under $1,000, it offers quite a bit of value as well. Let’s get into it.

Picking up the A-15 for the first time, you’re immediately struck with a sense of quality due to its heft and weight. There’s a substantialness to the case that’s really pleasing – this one doesn’t disappear on the wrist. At 42mm in diameter and 14mm thick, the watch wears large, as a pilot’s watch should, but I didn’t find it uncomfortable, even though the case is a bit taller than what I’d normally prefer in a watch of this size.

There’s nothing flashy about the finishing, but the brushing on the mid-case is well implemented, and the polished bezel is about as classic as it gets for this type of watch. It’s subdued and has the profile of an old-school tool watch, but perhaps just a few millimeters bigger in every dimension. The lugs are short and thin and angle downward ever so gently toward the tips. On my wrist, which is about 7.5 inches, this doesn’t have much of an impact on the wearing experience. But if you have a smaller wrist it’ll be a close call as to whether or not these lugs hang over your wrist or wrap it tightly. While 42mm isn’t an uncommon size for a modern tool watch, the A-15, because of the nature of it’s dial, feels more expansive and also just physically takes up a lot of real estate. If you’re considering this watch and have the opportunity to try it on before making a purchase, you definitely should.

As a lefty who wears watches on my right wrist, the triple crown setup here gave me pause initially. Even small crowns on well designed watches can dig into the lower forearm if you’re a right hand watch guy, and it’s something I’ve just kind of become used to over the years (we all have our cross to bear). For me, it really all comes down to how high off the wrist a watch is elevated due the caseback assembly or display back. The A-15, in my experience, wears pretty close to the wrist – the bottom of the lugs are the watch’s low point, not the caseback. That said, I didn’t experience any discomfort due to the triple crowns. While I noticed them, they aren’t particularly large or obtrusive. 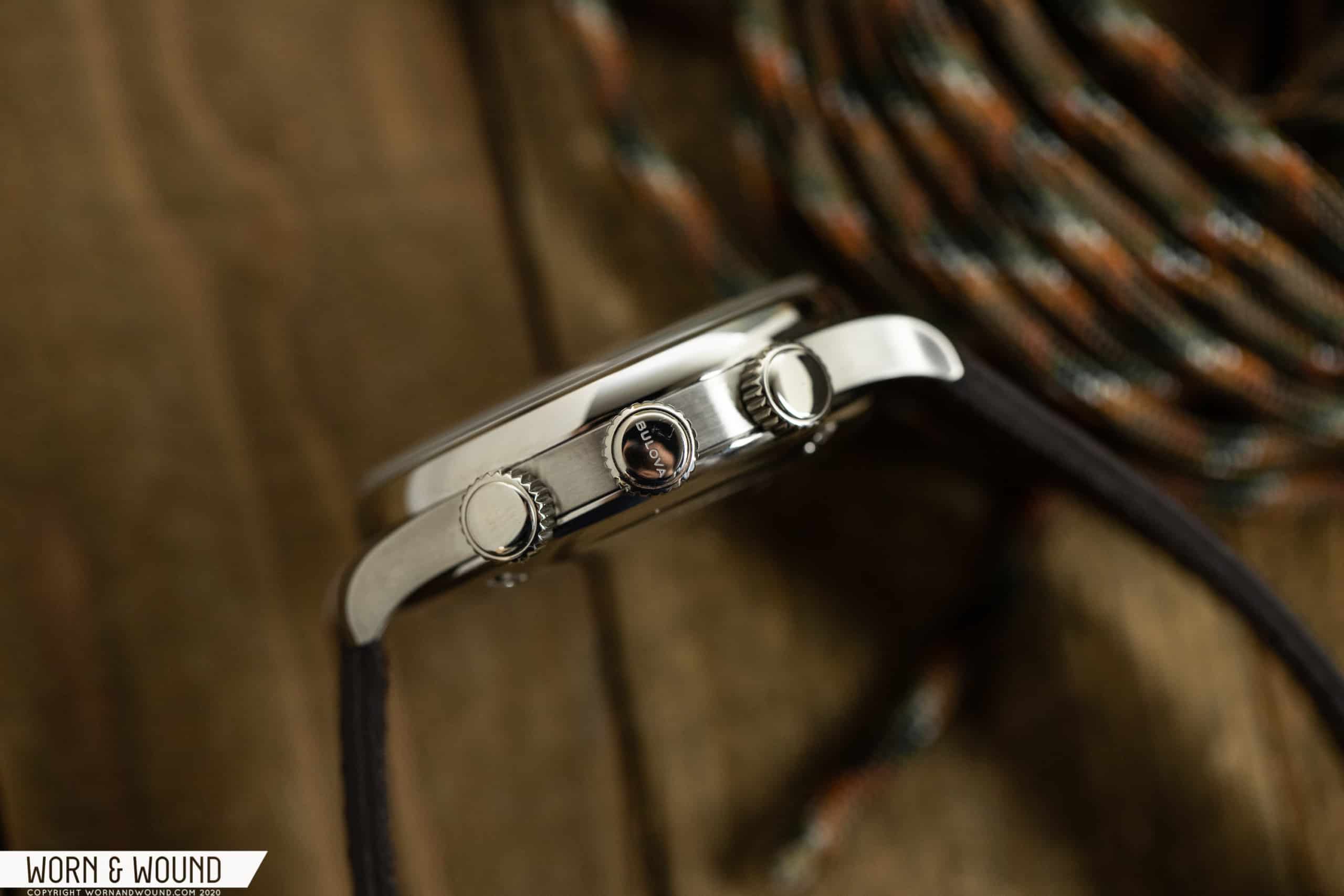 Let’s talk about what those extra crowns are actually used for, as they’re this watch’s calling card more than anything else. Looking at the watch, you see a series of circular time scales. From the outside in we have: minutes, hours, hours once more, and a 24 hour scale showing 13 – 24 on the innermost scale of the dial. We also have hash-like minute markers on the outer minutes scale, and a railroad style minute scale between the two hour scales. If this sounds like a lot to keep track of, it is.

The crowns make things even a bit more complicated, but in a fun way that will appeal to people who like to interact with their watch. The crown at 2:00 rotates the outer minutes scale. Think of this as you would a dive bezel – the most practical application here is to track elapsed time from a given point. The crown at 4:00 rotates the hours disc just inside of the rotating minutes scale. Like a 12 hour bezel, this can be used to easily track the time in a second time zone. 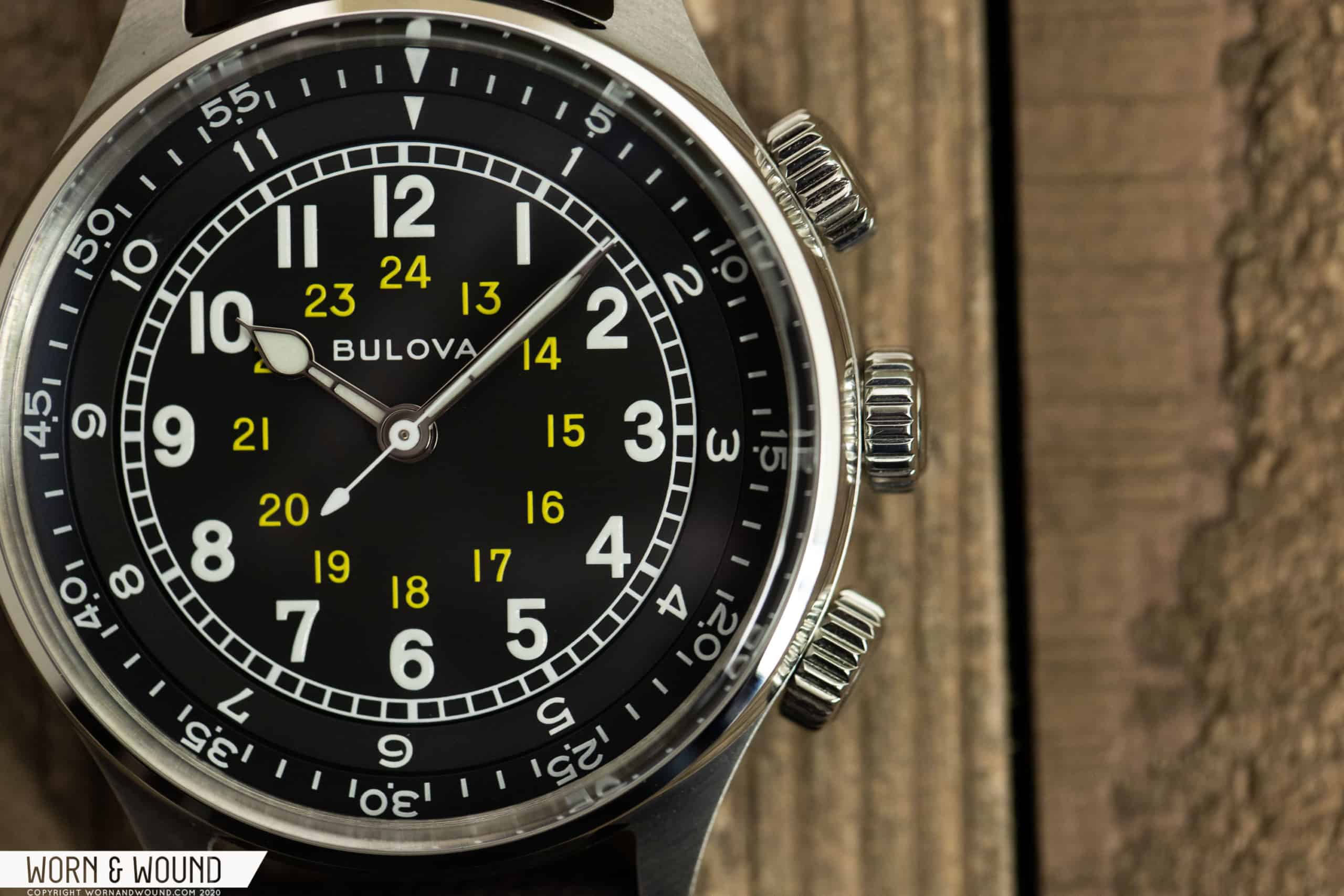 Both discs rotate in both directions, and operation is smooth and effortless. Bulova did a really nice job of making sure that these crowns can turn with minimal effort, and the tactile sensation is satisfying in a way that’s similar to actuating a really good chronograph, or turning a diving bezel with particularly tight tolerances.

One of the nicer details of the dial is the way that Bulova executed the rotating discs in such a way that they slope upward as you move toward the outside of the dial. The effect is very subtle, and I imagine it has something to do with ensuring each disc has the proper clearance to spin without generating too much friction against the dial material alongside it, but at certain angles when checking the time you get a sense of depth when looking at the dial that is uncommon in pilot’s watches, which are by design often meant to be as flat as possible. In terms of readability, it takes some time to get used to the clutter of the A-15’s dial. It’s a bit of any eye chart – there’s just a lot of text and not enough variation between typeface styles on the inner rings. After some time with the watch, though, you become more comfortable and your eye intuitively learns where to focus to read the time. However, if you’ve adjusted the inner rings for timing purposes, it adds another layer of complexity when you look down at your wrist and see, perhaps, both an hour and minutes track that are in positions you don’t immediately recognize.

But the dial, ultimately, is a strength of the A-15, as it does more to capture a general kind of pilot’s watch aesthetic (an idea that’s become a little washed out over time, as so many styles of watches claim to be aimed at aviators, and real pilots less frequently rely on mechanical watches to do their job) than any other component of the watch. The dial has a busyness to it that immediately makes me think of the Breitling Navitimer and other pilot’s watches with similarly cluttered and complex dials. The A-15, of course, isn’t nearly as complicated as the slide-rule enabled Navitimer, but it nevertheless fills the dial with a maze of numerals and symbols in concentric rings that has its sort of old fashioned charm.

The pop of yellow (in the most interior hours track) is also welcome, and here serves to give the watch a faux-aged look in a way that doesn’t involve radium colored lume. The yellow text not only provides a high level of contrast against the matte black dial, but it recalls vintage aviator watches in a clever way. The day to day wearing experience of the A-15, for me, didn’t involve using the watch’s key feature all that  much. Largely, that’s due to the fact that as a lefty I’m wearing this watch with the crowns in a hard to reach place. Taking the watch off, spinning the crowns to use the discs, and putting the watch back on is simply too cumbersome a performance.

Did I feel like I was being cheated out of this watch’s core functionality by not having the easiest possible access to the feature that might well draw people into the thing in the first place? No, not really. In real life, which is where you’re going to wear this watch, I personally just don’t find myself in desperate need of even one of the additional timing functions offered here, let alone both at once. Still, those rotating rings instill a ton of charm in the A-15 through their very presence and solid implementation. It’s fun just knowing they’re there. The A-15 is powered by the Miyota 82S6, a simple time only automatic movement. For the price, it’s hard to complain. The watch has a smooth winding action, and I suppose Bulova could have opted for a quartz movement here, but the vintage charm would have really been compromised if they had gone that route.

The A-15 is a really well executed curiosity that will appeal to fans of vintage pilot’s style watches, and the modern watches inspired by them. I think many users are likely to find a lot more real world functionality here than I did, and that’s great. But this watch doesn’t require that functionality to be taken advantage of to get some enjoyment from it, and I think it would be a mistake to dismiss the watch entirely simply because you might not have a need for either or both of the supplemental discs on the A-15. The question you should be asking yourself before committing to the A-15 isn’t “Do I need to track a second time zone on a regular basis?” or “Can I make use of what is effectively an internal dive bezel?” It’s “Am I the type of person who enjoys the tactile pleasure of fiddling with something that’s really well made?” If the answer to that question is yes, the A-15 could serve as a very satisfying, vintage inspired, fidget spinner.

Author Zach Kazan
Zach is a native of New Hampshire, and he has been interested in watches since the age of 13, when he walked into Macy’s and bought a gaudy, quartz, two-tone Citizen chronograph with his hard earned Bar Mitzvah money. It was lost in a move years ago, but he continues to hunt for a similar piece on eBay. Zach loves a wide variety of watches, but leans toward classic designs and proportions that have stood the test of time. He is currently obsessed with Grand Seiko.
Categories:
Review
Tags:
bulova
Related Reviews
Review / Featured

Hands On With The Xetum Stinson