When it comes to dive watches, I guess you could say I have a type. Chunky bezels, big hour markers, fat hands, and funky cases all appear heavily within my own watch box, from Seikos old and new to Rolex’s archetypal Submariner. The appeal of a simple, well done dive watch runs deep, and I suspect that’s why we see new contenders in this genre with regularity. A good diver, when done right, is also a great watch thanks to high legibility, a practical feature set, and a flexible design language that can span wardrobe styles with ease. 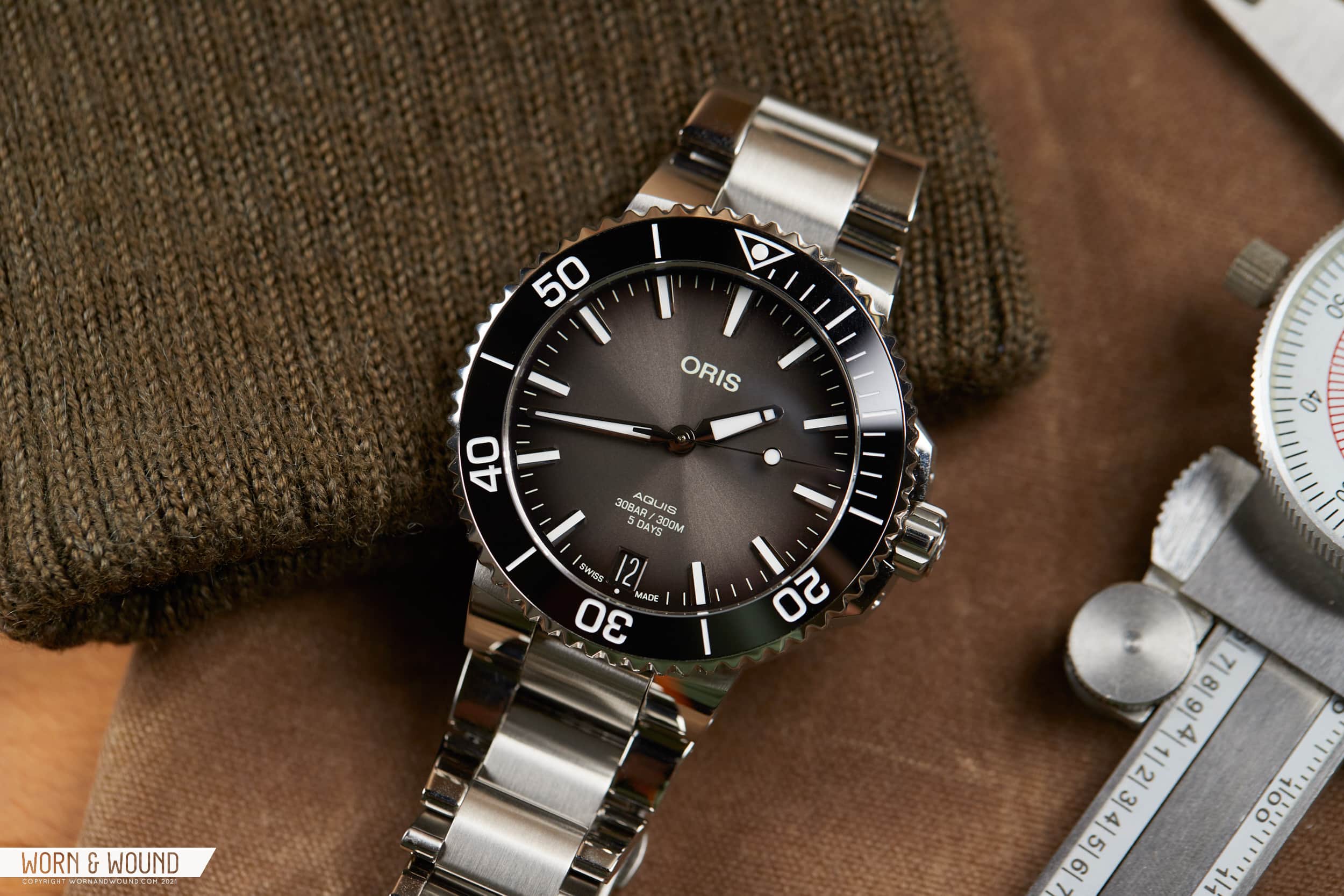 The Oris Aquis is, by every measure, a well executed, simple dive watch, yet it reads very differently from other classically styled divers like those referenced above. The Aquis is its own thing. I believe there are a few reasons for this, which I’ll get into, but first, let’s deal with the facts. Oris released an Aquis Date earlier this year, mercifully in their 41.5mm case, and within it have placed their new in-house automatic movement, the caliber 400 (which we introduced here). It might look the same, but this watch represents a new chapter for Oris’ most popular watch. The new Aquis joins an already sizable collection that features a healthy range of LEs, case sizes and materials, and complications (even a depth gauge). Each is built on the original formula which is defined by the tapered cylinder case and integrated steel bracelet or rubber strap. Wide bar hour markers and broadsword hands lend a sleek and legible dial aesthetic while a ceramic bezel matches the slope of the crystal. It’s a clean look that’s accentuated by the lack of any real case shape to speak of, placing all emphasis on the dial. So if you don’t like the dial and bezel presentation, you’re out of luck here.

The Aquis is a contemporary diver, and doesn’t adhere to many of the design trends of the genre. Oris has their Diver Sixty-Five line that covers that territory relatively well, I’d say. The Aquis is more akin to something like the Pelagos, marching to the beat of its own drum, so to speak. But even the Pelagos is more instantly recognizable as a tool/diver, where the Aquis has a simplicity and effortlessness to it that keeps you guessing, or wondering even. The fume dial and decidedly un-chunky hands offer a grace not often seen alongside watches with 300 meter depth ratings. This dial, plopped into a more formal case, would look the part with ease. The fact that there is not what I’d call an elegant case makes the dial feel nearly isolated, with just the bezel left to frame it in a seamless arc of glass. The result is something that borders foreign looking in the context of the current dive watch zeitgeist. None of this to degenerate an inelegant case, many qualifying examples of which you’d find in my own watch box. However, in my humble opinion, the shape of the case as it transitions to the form of the lug can lend a great deal of personality to the watch as a whole, if done properly. Measured from the bottom of the case, this Aquis is a hair under 41mm (measured from 10 to 4). The bottom edge of the case is flared out to meet the wrist, like a pair of bell bottoms, with the bezel assembly spilling out over the tucked in top edge of the case wall. The lugs are where things really get interesting with the Aquis, however. Are these even lugs? An argument could be made that the bracelet is simply built directly into the case; there is no solid end link between a traditional set of lugs, rather the “lugs” are just two of the wide links of the bracelet. The center link is therefore acting as the end link here. Taken on their own, you’re left with two, rather unflattering, in my opinion, 6mm wide lugs with an awkward 11mm span between them. Good luck finding a nato to fit that. I’ll be honest, the case/bracelet transition and design here is not for me. That said, the optional rubber bracelet leans into the wide lugs with intention, and somehow it works for me on a level that the bracelet does not. This is very subjective, of course, and I’m happy to see Oris take such a unique approach with the Aquis, cutting a clear contrast from the expected. Most importantly, this Aquis wears quite well, at 13mm in thickness and 48mm from lug end to lug end, it settles in nicely for day to day wear. Visually, from the top down, the watch head sits alone on the wrist, the rest is just bracelet, so the lug to lug looks even smaller. 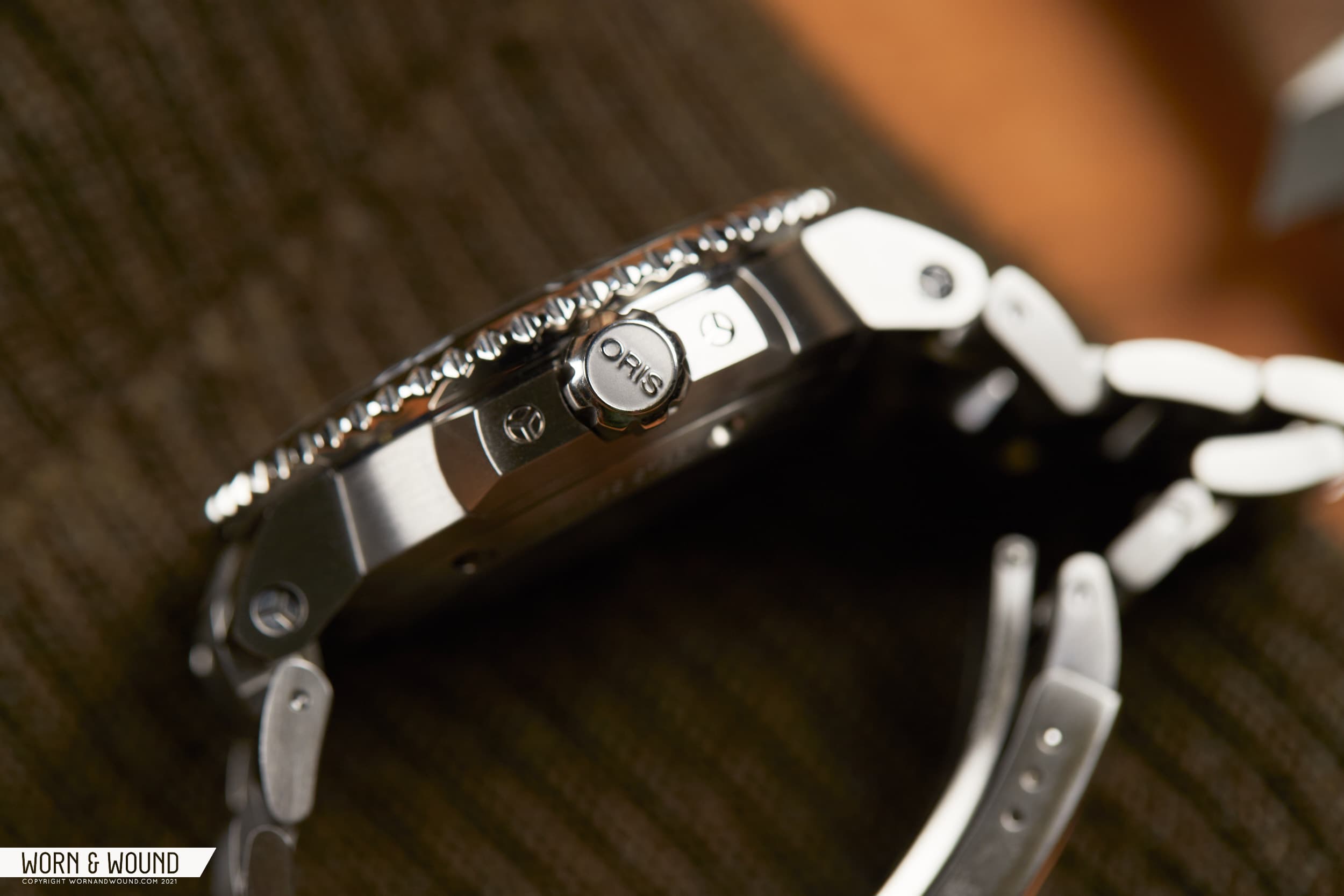 None of the above is new to this Aquis, so if you’ve never found yourself attracted to the watch in earlier configurations, the new movement is unlikely to sway you. If you’ve always been on the fence with this one, well, it might just pull you in. The caliber 400 that Oris is using in this Aquis was introduced late last year as a standalone announcement, and it certainly caught our attention in the process. The caliber 400 represents Oris’ first modern in-house automatic movement, and they are looking to take this one mainstream. Just take a look at the stat sheet: 5 days of power reserve, highly anti-magnetic, 10 year service intervals, and a 10 year warranty to top it off. Pretty impressive, I gotta say, and these are benefits that are easily understood by the average consumer, almost presented in the language of a new car. 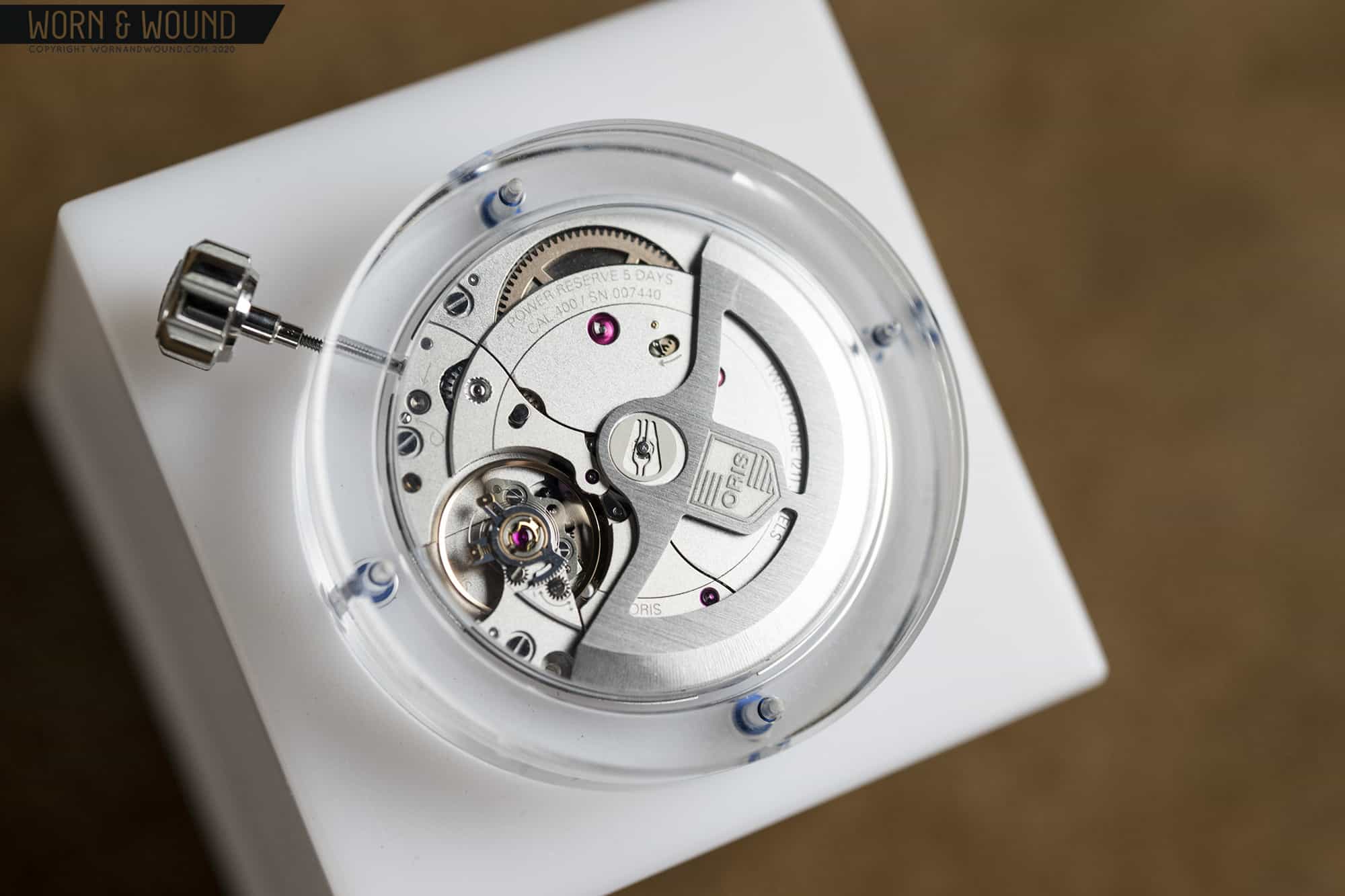 The name of the game in developing this movement was efficiency. A more efficient movement means less opportunity for things to go south, hence longer service intervals, and ultimately, a longer warranty period. Oris has been rather clever in how they’ve achieved this, removing or redesigning areas prone to frequent servicing. Let’s take a look at that power reserve.

Oris movements are no strangers to long power reserves, and with the caliber 400 the 5 days advertised is supplied by twin mainsprings that deliver 85% of their energy to the escapement over the usual 70% (according to Oris). The mainsprings are operating on less torque than usual to conserve as much of the wind as possible, in turn reducing the pressure on moving parts along the gear train. Finally, the oscillating weight ditches the ball bearings in favor of a less complex slide bearing that will wind in a single direction. Another step taken by Oris involves the use of silicone and other non-ferrous materials to minimize the adverse effects of magnetism on the movement. Again in the name of efficiency. In total, over 30 parts have been swapped for non-magnetic alloys, including a silicon escape wheel and anchor. In testing, Oris claims the movement deviated by less than 10 seconds a day after exposure to 2,250 gauss. For reference, the ISO 764 standard requires a less than 30 second deviation after exposure to 200 gauss. Oris is claiming a better than chronometer spec accuracy with the caliber 400, stating a -3/+5 daily deviation. This exact claim was difficult to verify under normal use thanks to one of the quirks of this movement. While it does hack, the minute hand has a rather annoying tendency to jump around when pushing the crown in. I’d usually stop the seconds hand at 12, fire up time.gov, and sync it accordingly, but attempts to do so here proved difficult. The minute hand doesn’t always jump, and a very delicate press will do the trick from time to time, but it’s hard to predict, meaning I often just settled for ‘close enough’ when setting the time.

That is, until I reached out to Oris for a little help, and learned that the problem is in fact me, not the watch. It’s a feature, not a bug, etc. Oris says “​​This behavior of the minute hand is normal due to the construction of cal. 400 and is also found in other established movements. It does not in any way affect the outstanding wear behavior, robustness, durability and precision of the cal. 400.” For best results in setting the time, “the minute hand remains in its position when pressing the crown, if the time setting has been carried out backwards, i.e. anticlockwise. Armed with this knowledge, setting the watch became much easier, though I will say this is a new one for me. Other examples of movements exhibiting this behavior escape me, but if you’re aware of any I’d love to hear about them in the comment section below.

That small (ish) aside, I quite like the caliber 400 in theory and in appearance. The simple, straightforward appearance of the movement suits the feel of the watch perfectly, and while I don’t particularly care for transparent casebacks on tool watches, this is a very fitting view. The flat matte texture of the plates and bridges cover much of the gears, giving off a straight business like vibe. Offering some levity are the two mainspring barrel gears peaking through, which form the ears of the Oris bear easter egg hidden in the design. 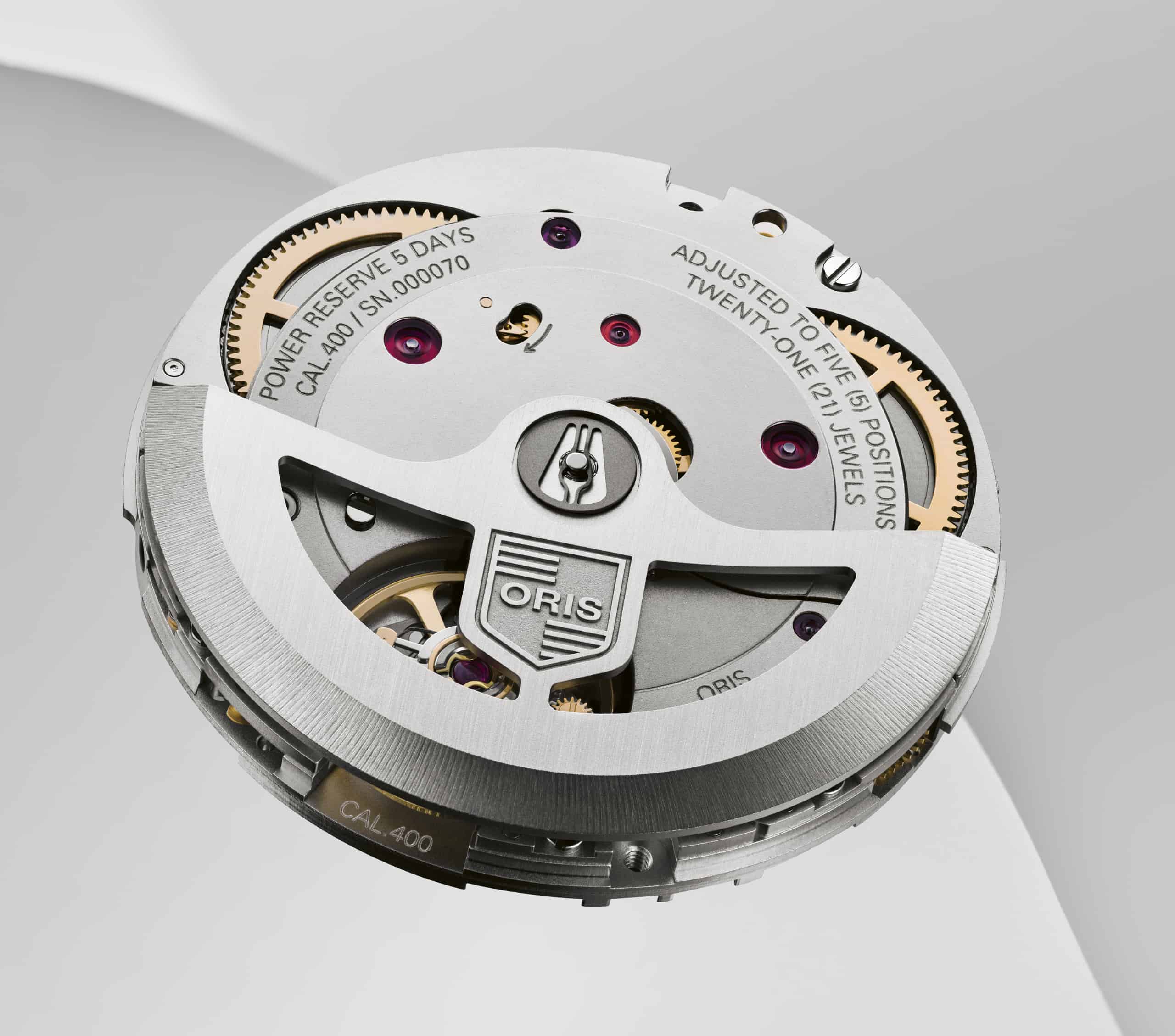 The Oris Aquis Caliber 400 Date (oh yeah, it has a date at 6 o’clock) is priced at $3,500 on steel bracelet, and $3,300 on a rubber strap, squarely undercutting the Pelagos with Tudor’s in-house MT5612 by over $1,000, and nearly $2,000 cheaper than the Omega Seamaster 300M with in-house caliber 8800 on bracelet. Factor in the 5 day power reserve and 10 year warranty and the Oris starts looking pretty attractive from a value perspective.

Where the Tudor and the Omega are likely a far more common sight, the Aquis makes a compelling case to buck the trend. If you’re on board with the actual case of this watch, that is. Oris.

Author Blake Buettner
Blake is a Wisconsin native who’s spent the past decade covering the people, products, and brands that make the watch world a little more interesting. Blake enjoys the practical elements that watches bring to everyday life, from modern Seikos to vintage Rolex. He is an avid writer and photographer with a penchant for classic cars, non-fiction literature, and home-built mechanical keyboards.
Categories:
Hands-On
Tags:
AquisOris
Related Reviews
Review / Featured

By Blake Buettner 09.09.2020
Oris has announced a new partnership with the non-profit Roberto …
Review / Featured