You ever see a watch and know you have to have it? That was me with the Seiko SZSB006 — a limited edition between Seiko and their Japanese retailer, TiCTAC. A vintage-inspired field watch (the SZSB006) and a dressier model (SZSB007) make up the commemorative collection. I wanted to get my hands on the steel black dial/bracelet version, and after a whole lot of luck, and an exchange of foreign currency, one was on its way over direct from Japan. The watch blends a lot of different looks into one cohesive package. Case geometry and design borrow from the SARB line, while the Alpinist’s cathedral-style hands make an appearance. There also some pretty heavy Railmaster and Rolex 1016 vibes there, without being too on the nose. Initial impressions from the watch-loving public have been mixed. Some cry “fauxtina”, while others question the value of the watch. Let’s dig in and see if any of these claims hold true after a few weeks on the wrist. The 40mm stainless steel case on the SZSB006 is in line with Seiko’s case design on the SARB line. You’ll find a mix of brushed and polished surfaces, both working together to highlight different parts of the case. From the top down, the polished bezel really pops, thanks to the brushed lugs on either side. I’m used to the level of finishing on my Seiko SKX, which is very basic and “tool-like”, so its interesting to observe the elevated technique seen on the SZSB. We’re nowhere near Grand Seiko levels, but little details like the slim polished chamfer on the inside of each lug that cuts into the line of the lug itself do jump out.

The proportions of the case are evenly divided between the bezel and crystal, mid case, and case back. When looking from the side, each section balances the next. No one section is too wide, and that translates to a slim-wearing watch that’s comfortable on the wrist all day long. Since the case back sits below the mid case, it nestles itself into your the top of your wrist. The curving mid case sits flush with the top of your wrist, while the domed crystal sitting atop the angled bezel results in an overall sleek appearance. Domed mineral crystal is not a material I’ve come across before, and it has such an interesting look. There’s no distortion from the top down or even slight angles, but as you roll your wrist and look from the side, the dial disappears into reflection. You can see the curvature of the glass and instead of being ultra-clear like sapphire or acrylic, you can see that there’s some depth to the material itself. It’s almost like looking through a big old magnifying glass. Surprisingly, the effect isn’t distracting at all, and adds some flair to the piece.

On the side of the case, you’ll see a plain, unsigned crown that’s protected by two subtle crown guards in the 3 o’clock position. The look is a lot like the case on the Alpinist, but without the extra compass crown at 4 o’clock. Another standout feature on the case is the drilled lugs. They make changing straps a quick and easy task, even if the closest tool at hand is a bent paperclip. If my few weeks with the watch, it’s spent a lot of time on my wrist. Pretty much all of the time since it’s showed up, actually. It wears really well on my 6.75” wrist. Since the bezel is on the chunkier side, it wears a bit small if anything. When comparing it to my 40mm Sinn 856, the dial looks much smaller and the sleek case design wears a touch smaller, despite the two sharing similar dimensions.

If there was one thing about the watch that made me scour the globe to try and find one, it’s the dial and hands combination. The SZSB features a matte black dial that looks ever-so-slightly desaturated. In some lighting conditions, it may read as a very dark grey. There are two Arabic indices at the 12 and 6 o’clock position, a date wheel at three, and printed rectangular plots of aged lume for the rest of the hour markers. I really like the vintage-inspired type used on the dial at 12 and 6, especially the “open 6”.

In between the markers, you’ll find razor-thin lines for each minute, and shorter lines spaced out in between. The print quality on the dial is excellent — each hash mark is uniform and crisp, contributing to a clean appearance overall. Just under the 12 o’clock marker, you’ll find an applied Seiko logo, rendered in silver balanced out by the words “Automatic”, “23 Jewels”, and “10 BAR” spread across three lines located above the 6. The dial has plenty of breathing room, mostly on the left and right side of the dial. It leaves plenty of room for the cathedral-style hands. 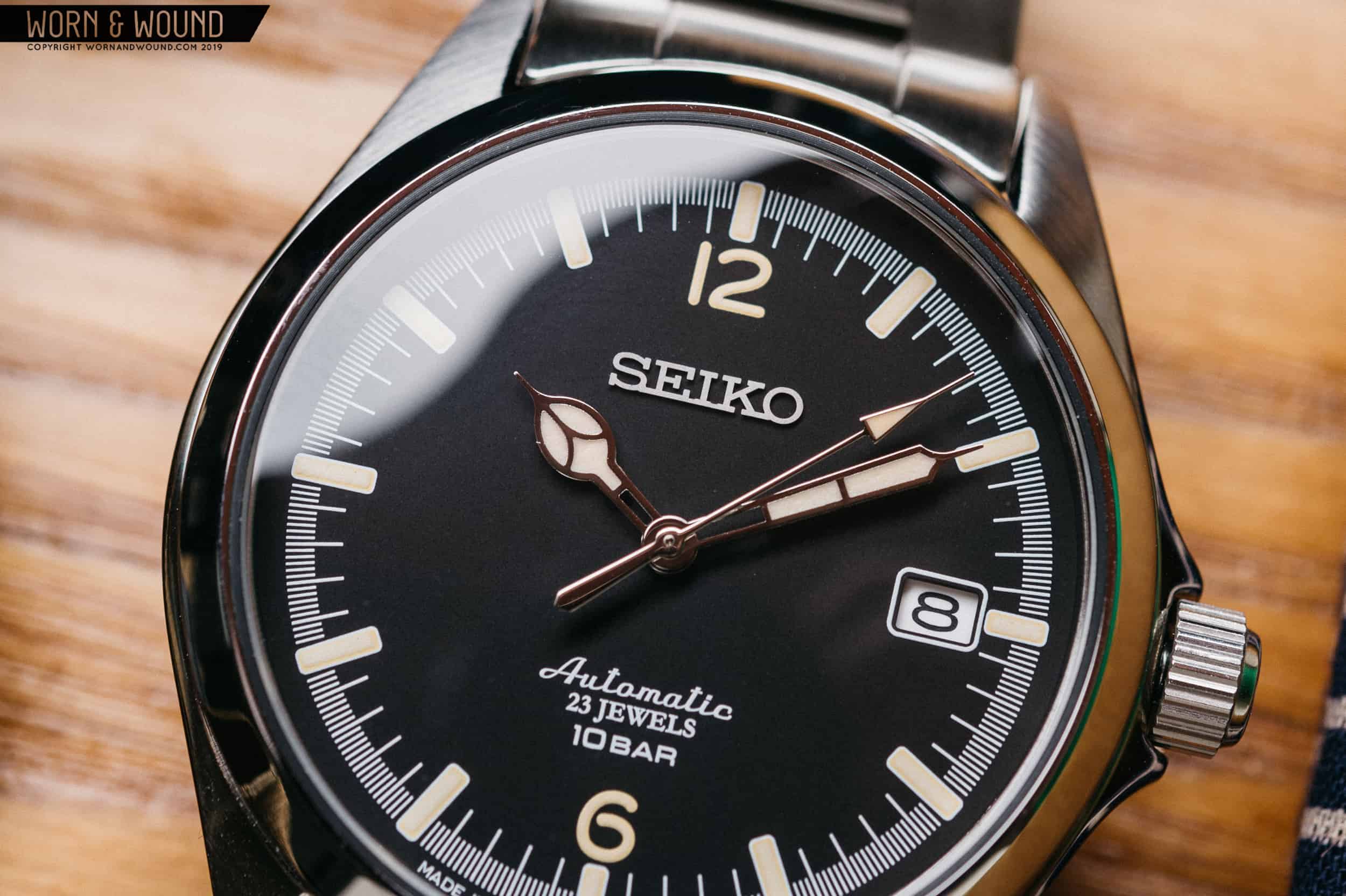 To me, the cathedral hands are a perfect choice for this watch. They’re large, legible, and have an interesting design that stands out on an otherwise plain looking dial. Cathedral hands were used primarily on military and pocket watches. They lend a vintage look to the watch and look great with the vintage colored lume.

“Aged” lume can be a huge point of contention. I don’t think Seiko is trying to pull a fast one on us here. To me, if the rest of the watch doesn’t feature simulated patina and wear, the shade of lume is another color choice to work with. If the SZSB had white lume, I don’t think it would have the same warmth and charm that it does with the creamy pale orange lume that’s been used. In dark conditions, it glows a bright shade of blue-green and looks fantastic.

Inside the SZSB006, there’s a Seiko 4R35 keeping time. The 4R35 is a replacement for Seiko’s long-standing 7S26 movements, and features a few notable upgrades. Most valuable to daily use is the addition of hand winding and hacking seconds capabilities to let you accurately set the watch. This updated movement automatically winds and will stay ticking for up to 40 hours on a single full wind. Accuracy is rated at +45/-35 seconds per day, which isn’t going to be breaking any observatory chronometer records, but should be fine for casual everyday use. There’s also a quick-set date feature with the window located at three. While the white date wheel doesn’t go all that well with the theme of the watch, you can’t argue with its high degree of legibility. Evaluating the bracelet that comes on the SZSB006 is a tricky task. I love how it looks, but dislike how it feels. Let’s start with how it looks. The bracelet is a brushed three-link oyster style bracelet that features a gentle taper from lug to clasp. The brushing is medium grained — enough texture to play with the light, while not overdoing it so there’s still a shine. On the underside, a small clasp keeps the bracelet secured. There’s no security lock or flip-down clasp, just a button on either side to pop it open.

The bracelet gives the watch a vintage look and feel, complementing the dial and case design every step of the way. The only problem is how it feels. There’s no nice way to say it, the bracelet feels cheap and junky. On a watch of this price, I’ve come to expect solid end links, not the flimsy folded ones here. Overall, the bracelet has a hollow and jangly feel, and not in the way that a vintage Rolex feels. Sizing the bracelet is very easy…actually a little too easy. The pins practically fly out the second you even think about adding a link, which makes me worry about the watch popping off. It’s unfortunate that the bracelet looks so good, because it doesn’t feel the part. Luckily, the SZSB006 is wide open to pretty much any strap you want to put on it. I’ve found myself enjoying it on a natural veg tan leather strap from One Star Leather Goods and a variety of nylon straps (preference towards olive and dark blue). All problems with the bracelet aside, I still like the way it looks on there and that’s what it’s been on most of the time.

Throughout the review, it may seem like I’m being a bit nit-picky. Sure, the movement could be better, a sapphire crystal wouldn’t have hurt, and some DiaShield coating would have been great. I can still say that the SZSB006 is still a really solid watch. It’s impressive that a watch with this spec sheet can make me reach for it over other far more valuable watches in my collection. Perhaps it’s some proof that specs aren’t everything. For a hair over $500 after shipping, few watches have the same vibe as this limited edition from Seiko. From a purely objective point, yes, the SZSB could have some better parts for the price. But subjectively? I keep reaching for and enjoying it day after day, and to me, that’s what matters the most. Maybe we’re spoiled by Seiko’s construction and finishing in their sub-$500 offerings because when compared to other models in the lineup, the price of this one feels a little off. Either way, I’m happy to foot the bill for the “limited edition” tax for a watch, only because I’ve been enjoying it so much. TiCTAC

Author Ed Jelley
Ed is a Long Island-based writer and photographer with an affinity for watches, fountain pens, EDC gear, and a great cup of coffee. He’s always looking for the best gear for the job—whether it be new watch, pen, flashlight, knife, or wallet. Ed enjoys writing because it’s an awesome (and fulfilling) way to interact with those who share the same interests.
Categories:
ReviewWatches Under $1000
Tags:
SARBseikoTiCTAC
Related Reviews
Review / Featured