It’s impossible to talk about flieger watches without mentioning Stowa. Equally, it’s difficult to talk about Stowa without referencing the brand’s strong historical connection to the manufacture of these watches. Stowa were one of the original five watchmakers to produce the archetypal observation watch, or Beobachtungs-uhren, of the German air forces.

Although some of the original requirements have slipped to the wayside over the years as form surpasses its original function, such as the need for an anti-magnetic cage or the huge 55-millimeter diameter, the simple design of the Type-A dial has stood the test of time remarkably well. With room for only minor variations, Stowa has, among others, experimented successfully with some less historically accurate variants. A blue dial reminiscent of the IWC Petit Prince was an instant hit as a limited run in 2016, and recent months have seen bold reinterpretations in the form of the Verus and Weiss models.

Another slightly atypical “Flieger” (that’s with a capital “F”) model has been a major part of Stowa’s line-up for a longer period of time. The Stowa Flieger Classic 40 Ikarus (for the sake of simplicity I’ll just refer to it as the Ikarus going forward) takes the same form as the regular 40-millimeter Type-A Flieger, but features a striking and dynamic grey dial. In the words of Stowa’s Jörg Schauer, “the idea behind the grey Ikarus was to launch a dial version which is a bit more civil but with the same typography of the Flieger watches.” The result is a watch that is at least 90% flieger, but is also a little easier to dress up and stands out from the crowd a little more.

As someone who can appreciate the appeal of a flieger, but is also generally unmoved by them, the Stowa Ikarus could be the perfect introduction to that style of watch. I’ve taken the opportunity to check it out in a little more detail.

The case of the Ikarus measures 40 millimeters across and is shared with Stowa’s other 40-millimeter cased Fliegers and Marines. The lug-to-lug length is just under 49 millimeters and the case is a little over 10 millimeters thick. That last figure is not bad at all for a watch housing an ETA 2824-2 automatic movement and with a slightly domed sapphire crystal up top. It only has 5 atm of water resistance, but that’s not uncommon for flieger-style watches. The case features an even brushed finish. The push/pull crown is deliberately very easy to operate. One of my gripes about most flieger-style watches is the prominence of the crown—particularly the difficulty in hiding it within the design, as well as the potential for a lack of comfort on the wrist. Stowa’s onion crown isn’t as large as the ones seen on some other traditionally-styled fliegers, and during my time with the Ikarus I haven’t found the crown to be a physical annoyance. Aesthetically, I’m definitely warming up to it, too.

Additional Reading: Check out our reviews for the Flieger Classic 40 and Classic Sport. 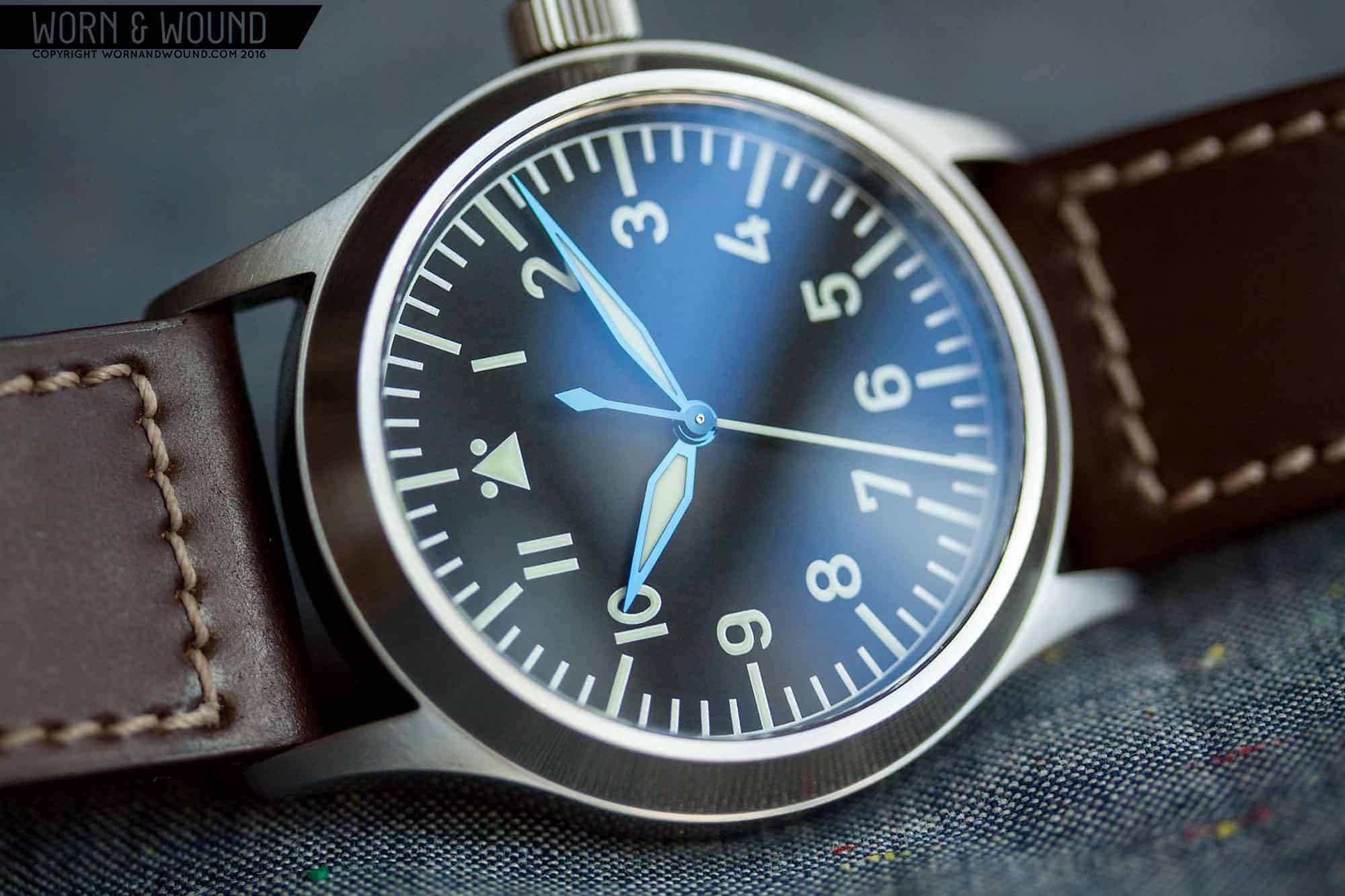 As nice as the case is, the dial is the focal point of the Ikarus. Like me, you may have never have sat down and thought how much you’d like a watch with a dial that shimmers and sparkles in the sunshine. The dial of the Ikarus, which is rhodium-plated and then glass bead-blasted, does just that, and the results are so good. To clarify, the dial doesn’t sparkle like an iced-out monstrosity, nor does it shimmer quite like Mother of Pearl. Instead, the rough surface created by the blasting process rapidly switches from a somber grey to a silvery ash depending on the way the light hits the dial. Legibility is still key with a flieger-style watch, and the Ikarus is very easy to read. The outlined Arabic numerals around the dial pop. The six is supplanted by a highly-legible date window and the 12 by a triangle flanked by two dots. The indices, triangle, and all three hands receive a generous application of C3 Super-LumiNova. Although the bold hands and indices aren’t quite as easy to pick out as they are against a traditional black dial, they are in no way camouflaged and nighttime visibility is pretty much on a par. On the wrist I find the Ikarus to be very comfortable. The length from lug-to-lug is towards the upper limit of my preferred range, and also towards the top of what I would expect given the diameter. The slim profile and down-turned lugs deliver a watch that should wear well under a shirt cuff in most cases, and the muted case finish helps avoid it looking too brash or dominating on the wrist.

Several strap options are available from Stowa, and it’s almost surprising how much they change the tone of the watch. Black leather with minimal grain reinforces the civilian look that Jörg Schauer intended. A traditional riveted brown leather strap brings out more of the flieger DNA that is still present. Although I chose to spend most of my time wearing the Ikarus on Stowa’s riveted strap, it does look slightly out of place in more formal attire. As much as the watch can straddle multiple situations and dress codes effortlessly, the strap needs a little switching around to suit. With either option, the stock leather strap offered by Stowa is soft and supple. It’s one of the few cases I’ve found recently where the strap paired by the manufacturer nails both aesthetics and quality. If you set out looking for a flieger, then you are likely to gravitate towards a more traditional offering, either a Type-A or Type-B. Stowa are one of those brands that should undoubtedly be on the shortlist. If, like me, you’re not quite looking for that cosmetically accurate reproduction of a flieger, but instead want something that feels a little more modern without straying too far from the typical aesthetic, then the Ikarus is a great option. The Ikarus is available directly from Stowa with a starting price of €680 (including VAT), which for US buyers is roughly $670 as of this writing, making this an exceptional value. Stowa

Author Brad Homes
Brad stumbled into the watch world in 2011 and has been falling down the rabbit hole ever since. Based in London, Brad's interests lie in anything that ticks, sweeps or hums and is slightly off the beaten track.
bradwatch
Categories:
ReviewWatches Under $1000
Tags:
Stowa
Related Reviews
Review / Review