Quartz watches tend to get a bad rep, and often it’s for good reason. It’s hard for most watch lovers to dissociate the image of endless racks filled with poorly made no-names ticking away and selling for $12.98 a pop at your local Walmart. That said, not all quartz watches are created equal. When done right, a quartz watch can be an incredible thing, chock full of functionality you won’t find from a mechanical, not unless you’re ready to hunker down some serious cash. Today, we’re going to take a look at some of our favorite modern quartz watches, many of them featuring complications that go beyond simple timekeeping.

The Gavox Aurora is an industry first. On the surface, it appears to be just another Aviator watch, albeit a very cool looking one. Inside, however, is a totally different story. That’s where you’ll find a unique Soprod mechatronic movement developed by the Swiss manufacture in conjunction with Gavox to the brand’s specifications. First, let’s take a closer look at the movement. The SOP 716 is a modular caliber capable of being programmed to display a multitude of functions, of which there are 17 according to Soprod literature. As our own Zach Weiss pointed out in his review of the Aurora, “it’s like having a full featured digital watch, with the styling and motion we love from analog.” The Aurora comes programmed to display 7 modes: home, retrograde seconds, UTC, timer, chronograph (with central minutes), date, and moon phase. The movement also has an incredibly impressive battery life—approximately 4 – 7 years when there are no active functions running. Of course, all that functionality lends itself to the design, which manages to pack a whole lot of information on a dial without muddying the aesthetic. All in all, the Aurora is a great looking watch sporting one of the coolest movements I’ve seen in quite some time.

Bulova has spent a lot of bandwidth over the past couple of years innovating its high-frequency, high-accuracy quartz movements, and in doing so the firm has found itself a comfortable niche in the market. Earlier this year, Bulova released an impressive line of chronographs dubbed CURV, featuring movements that are, as the name implies, curved. Yes, these are the first curved chronograph quartz movements ever made, built on the Precisionist platform Bulova introduced back in 2010. They feature a 262 kilohertz frequency (whereas a standard quartz oscillator has a 32 kilohertz frequency), which improves accuracy and results in a smooth sweep of the second hand. 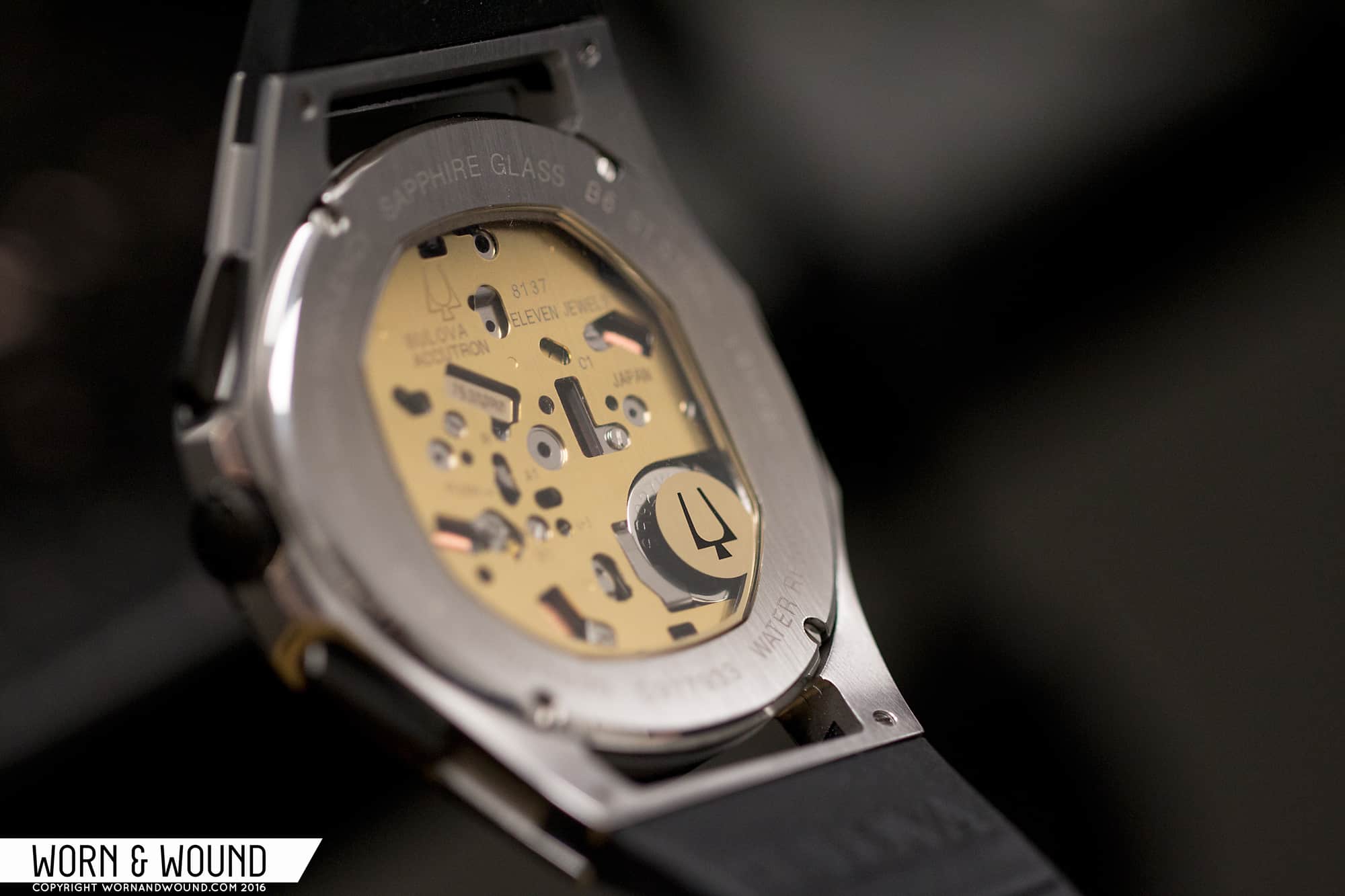 But Bulova didn’t just develop these new movements for bragging rights. The curved case and movement make these watches supremely ergonomic; they wrap around the wrist, and they’re a joy to wear. You can be sure that Bulova will be making good use of these calibers in the near future.

In a world plagued with unsightly fitness trackers and smart watches, the Activité Pop from Withings is a breathe of fresh air. With one glance it becomes clear that the designers started with the notion of a classic watch and built out from there, rather than downsizing a cell phone and strapping it to the wrist. The aesthetic is far more Max Bill than it is Pebble.

Powering the Activité Pop is the brand’s “Connected Movement,” which appears to be a custom-built quartz caliber with an integrated accelerometer and digital tracker. The display is not digital, but rather analog, and the counter between 4 and 5 o’clock is a progress tracker that syncs with your phone via Bluetooth.

Given how much Seiko gets discussed on worn&wound, it’s a little surprising that we’ve never really delved into the world of Spring-Drive movements. Granted, a Spring-Drive isn’t really a quartz movement under traditional standards, but it does borrow quartz tech so we’ve included it in our list. But what exactly is Spring-Drive, anyway?

An oversimplified answer is that it is a movement developed by Seiko with the intention of combining the best of mechanical and quartz technology, while at the same time eliminating the weakness inherent to both. But to be more specific, a Spring-Drive movement is largely mechanical except for one small fundamental part—the escapement. In its place is a tri-synchro regulator, which regulates all the energy of the Spring-Drive mechanism. That energy takes three forms: the mechanical energy produced by the mainspring itself, the electrical power generated from the mainspring’s motion which then activates an oscillator, and the electromagnetic energy that turns the glide wheel 8 times per second. The speed of the glide wheel is sampled each time it makes a turn, and its speed is then compared to a reference quartz signal by the circuit. The result is an incredibly precise and reliable movement, with accuracy that is around -1/+1 second a day. And because the release of energy isn’t controlled via a start-stop mechanism the way a traditional escapement does in a purely mechanical movement, Spring-Drive movements feature a second hand that moves in one continuous sweep. One of the coolest watches using Seiko’s Spring-Drive technology is the recently-released Grand Seiko 8-Day Power Reserve unveiled at Basel 2016. That’s right, eight whole days of power reserve made possible via three separate barrels. Seiko is only making eight of these in their Micro Artist Studio, which is the uppermost echelon of Seiko’s manufacture, and retail is $55,000.

For the rest of us mere mortals, Seiko has an entire line up featuring their 9R-series Spring-Drive calibers at a significantly lower price point. One of my favorites is the SBGA011 “Snowflake” dial, inspired by the snowy mountains outside the studio where the watch is made. It’s still quite a bit of money, but those who have ever handled a Grand Seiko can stand by the brand’s renowned fit and finish.

We recently reviewed the Klok-01 from Klokers, a piece born of a clever design concept that, despite a few niggles, we liked very much. The Klok-02 is the evolution of the brand’s inaugural model, taking a similar visual concept and building it out to include a jump-hour world-timer with retrograde hands. Powering the watch is another one of Soprod’s ingenious mechatronic movements, the SOP 813.

The dial is split in half. The top half has two layers of retrograde indexes used for basic timekeeping. The shrouded bottom half, however, is where the magic happens. An aperture in the black shroud reveals a city and city code. By pushing the button off 4 o’clock, one can jump the hour forward and change the city, effectively creating a world-timer, or more accurately a “traveling jump-hour.” Pretty nifty. Of course, an impressive movement deserves an impressive case, and Citizen did not disappoint. Because ultra-thin watches are prone to bending, Citizen focused on hardness and overall rigidity to ensure the integrity of the case. The limited edition Eco-Drive One comes with a mid-case made of cermet—a high-end composite made of ceramic and metallic materials—which is then further enforced by a tungsten carbide bezel. The other three general release models have stainless steel cases with cermet bezels. At $6,000 and $2,600 for the limited edition and the general release models, respectively, the Eco-Drive One is certainly a niche product. But in many ways, the Eco-Drive One is also like a concept car—Citizen used it to show off some new tech, and it will eventually trickle down to the rest of the product line. Citizen will most certainly democratize this technology, and I’m really excited to see what sorts of watches come out of that.

It would make sense for the company that pioneered quartz technology to produce some of the best quartz watches on the market today. It’s no Spring-Drive, but as far as straight up quartz movements go, Seiko’s 9F series is arguably the crème de la crème. But what makes these movements so special? Well, let’s start with the fact that Seiko grows its own crystals in giant reactors. Then, each crystal is individually tested to see how it responds to temperature changes before being paired with a circuit programmed to the specs of that particular crystal. Don’t worry, there’s more. The 9F series also uses a twin pulse control motor, which allows for the use of larger hands without major impact on the battery life. An anti-backlash mechanism is also employed to eliminate any wobble when the second ticks across the dial, and for the precision obsessed, there’s an auto-adjust mechanism to help the second hand hit each dial marker. And before I forget, there’s also the accuracy, which is roughly -10/+10 seconds a year! The list goes on. While there are many great watches to choose from, the SBGX063 is one of my favorite models in Grand Seiko’s quartz family. From the 37mm case to the beautiful champagne dial, the watch is absolute class. One can dress it up or down, and it’ll never skip a beat.

Our love for Sinn is well-known and certainly well-documented. Though we often discuss the brand’s pilot and instrument watches, we haven’t given too much dedicated attention to Sinn’s diver range. One line particularly relevant to today’s article is Sinn’s Hydro series.

The Hydro collection consists of a handful of divers specifically designed for underwater functionality. They won’t fog, they’re pressure-resistant, and the dials are readable under any angle when submerged. To achieve these features, Sinn fills their Hydro watches with oil, which completely replaces any air inside the case. The oil has the same refractive index as that of a sapphire crystal, which allows for the aforementioned legibility at any angle.

Because the watch is entirely filled with oil, a mechanical movement is not a viable option. Instead, Sinn uses a high-grade Swiss-made ETA 955.652 quartz caliber. The 955.652 is part of ETA’s Thermoline series, which features thermo-compensated chronometer quartz movements capable of accuracy that is, according to ETA, twenty times that of a standard quartz movement.

The UX EZM 2B is part of Sinn’s iconic Mission Timer series, a line of purpose driven tool watches designed for use in some of the harshest conditions imaginable.  The UX EZM 2B takes that mission statement and wraps it inside an ultra-aggressive diver boasting a slew of Sinn tech—tegimented submarine steel, hardened PVD coating on the S model, D3 crown system, and a captive bezel.

And that’s our list. It’s by no means definitive or exhaustive; there’s much more out there, from Seiko’s popular meca-quartz calibers to Citizen’s impressive HAQ A010 movement.

Author Ilya Ryvin
Ilya is Worn & Wound's Managing Editor and Video Producer. He believes that when it comes to watches, quality, simplicity and functionality are king. This may very well explain his love for German and military-inspired watches. In addition to watches, Ilya brings an encyclopedic knowledge of leather, denim and all things related to menswear.
ryvini
Categories:
Guides
Tags:
bulovaCitizengavoxGrand SeikoKlokersQuartzSinnsoprodSpring DriveWithings
Related Posts
Review / Watches Under $1000