Watches in space capture the imagination like little else in the hobby. There’s something about those of us who exist strictly within the realm of earth’s habitable atmosphere using the same timekeeping tool as the most adventurous human beings that is undeniably appealing. It goes without saying that in spite of NASA’s recent announcement that they’ll take folks on a ride to the space station in a few years for strictly commercial purposes that most of us simply won’t ever have the chance to orbit the earth in a small metal tube. We can, however, buy the same watch that’s issued to professional astronauts, bringing us within spitting distance of our heroes in a way few other hobbies can match.

Usually when we think of space watches, it’s the Omega Speedmaster Professional that comes to mind. There’s good reason for this – it was, after all, the first watch worn on the moon, and remains the only timepiece flight qualified by NASA for all manned spaceflight, according to the iconic text on the caseback. But in the 50 years that we’ve been stretching beyond the reach of our orbit, astronauts have worn a variety of watches on their wrist. And the United States is not the only of the world’s space agencies to provide a watch to its astronauts. Quietly, Fortis has carved out a deep history making watches designed for space exploration. The Official Cosmonauts Chronograph, released in 1994 and powered by the classic Lemania 5100 movement, was the first watch to be officially sanctioned for use by the Russian Space Agency (ROSKOSMOS) and flew on MIR and ISS missions from 1994 until 2003. This original Cosmonaut’s Chronograph was eventually replaced by the Fortis B-42 Official Cosmonaut’s Chronograph in 2003. The Lemania movement gave way to an ETA 7750, and the case was upsized to 42mm (for better handling using bulky space gloves).

That original version, powered by a Lemania 5100 movement, is something of an enthusiast’s favorite. It’s got space watch pedigree, a traditionally sized steel case that comes in at 38mm, and a movement that is pure gold to chronograph nerds. The Lemania 5100 is, of course, a central minutes chronograph, which for many is massively more functional in real world timing situations. It seems to me that “space travel” is one of those scenarios where you want to leave as little to chance as possible, making an easy to read central minutes counter all the more appealing. It’s interesting to look at the Fortis alongside the much more famous spacewatch, the Omega Speedmaster, and compare the two. Obviously, both are chronographs — giving each timepiece a level of utility that can actually be used in space flight in a myriad of scenarios. The Fortis, though, was only cast as a space watch after several decades of space flight by NASA, the Russian Space Agency, and others. The Speedmaster was drafted into the space race after it had been on the scene for a few years. It was originally marketed as a driver’s chronograph to the expanding market of auto racing enthusiasts that sprang up in the 1950s. It lucked out and got to go to the moon after passing a series of NASA tests that a bunch of other watches just happened to fail. 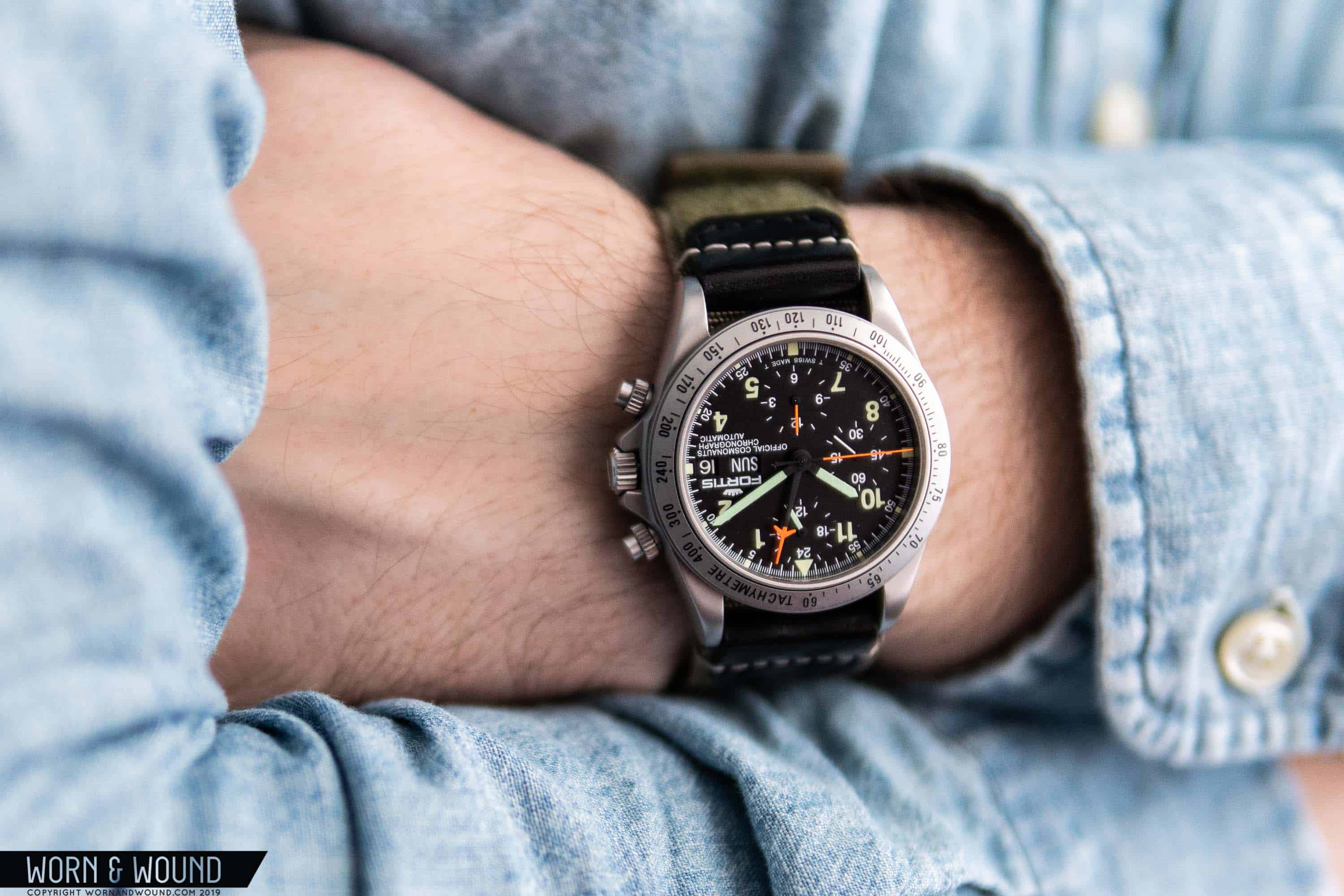 As an intentional space watch, the Fortis Cosmonaut isn’t dramatically different from the Speedmaster. It still has the racing inspired tachymeter scale (and is still engraved on the bezel), and of course we’re still dealing with a chronograph that has tool watch proportions and case lines. The movement, though, is quite a bit different, and represents something of a concerted choice on the part of the Russan Space Agency to go with a different kind of functionality. The automatic movement, with additional moving parts, is perhaps not as reliable as the hand wound calibers found in the NASA approved Speedies, but the central minute counter is something of a game changer, and lends a significantly different feel to how the watch is actually used as a watch.

Watches meant for outer space have a special kind of appeal, regardless of the space agency they’re associated with. The Fortis Cosmonaut is a reminder that the Speedmaster doesn’t have a monopoly on the space watch market, and that there are different schools of thought on the feature set a watch designed for space should have.

Author Zach Kazan
Zach is a native of New Hampshire, and he has been interested in watches since the age of 13, when he walked into Macy’s and bought a gaudy, quartz, two-tone Citizen chronograph with his hard earned Bar Mitzvah money. It was lost in a move years ago, but he continues to hunt for a similar piece on eBay. Zach loves a wide variety of watches, but leans toward classic designs and proportions that have stood the test of time. He is currently obsessed with Grand Seiko.
Categories:
FeaturedVintage
Tags:
ChronographFortisLemania 5100
Related Posts
Article / News & Releases