When I first became familiar with the genre of Soviet era Russian watches I was immediately hooked.  Unique designs and interesting movements drew me in.  After spending some time reading up on the history of Russian horology, I have developed an even greater fascination.  So for those of you out there who may not be familiar, I thought I would present a beginners look into Russian watches, so that you too may catch the Russian watch bug, and take the initiative to read and learn more. The genre of Russian watches is well traveled on watch websites, magazines, books, etc, and the history of Russian timepieces is rich.  Therefore, I really want to stress that this piece is meant to be just a small introduction into a fascinating genre of Russian horology.  As you will hopefully see moving forward, there are many outstanding resources for more information on the topic out on the internet for one to consume, and I could not possibly hope to present a complete history of Russian watches based on my comparatively limited knowledge.

**Self deprecating disclaimer over**

Soviet era Russian watches were the product of Joseph Stalin, bred out of an effort to limit western import of goods, and bring efficient time keeping throughout the country.  In many ways, the creation of the Russian watch industry from basically nothing, greatly helped to democratize a once niche, luxury good.   Since its beginnings in 1930 at the order of Stalin, Russian watches have grown to, by many accounts, a stature and quality only exceeded by Swiss timepieces.  To quote Russian watch collector Mark Gordon’s website,

“Soviet clocks and watches were the first timepieces in space, they provided time signals for navigation and targeting in Soviet strategic aircraft and naval vessels, they timed world chess matches, they controlled lighthouses and marine buoys in the Arctic seas, they coordinated traffic on the world’s longest railroad line (the Trans-Siberian Railroad) and of course they graced the wrists of millions of Soviet citizens and the walls of their homes, factories, schools and offices.” 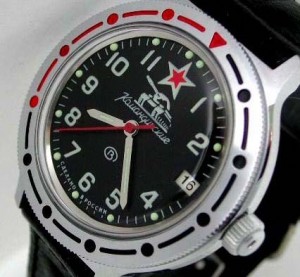 Many of the watch manufacturers that opened at the birth of Russian watch making are still around today (in some form), and many of the timepieces produced during the Soviet era are available for sale, trade or watch lust today.  There is a robust community of Russian watch collectors and historians, like Mark Gordon, doing good work to preserve retell the history of these timepieces.

What are some of these watch brands I speak of, you ask?  Well, for starters, there’s Raketa.  Founded in 1962, Raketa was produced out of the Petrodvorets Watch Factory, which dates back the 1700’s and Peter the Great.  During the Soviet era, Raketa produced watches for the Red Army, Soviet Navy, North Pole expeditions, and civilians, and got its name from the Russian word for rocket.  Here’s a great example of an 80’s Raketa, and I love this one with developed for the 1980 Moscow Olympics.

Another Russian watch brand of note is Vostok, which was founded in 1942, making it the oldest of the Russian watch companies. Known for its Komandirskie and Amphibian models, Vostok is named for the Russian space program by the same name.  Vostok continued to make watches until as late as 2010, when the company filed for bankruptcy. 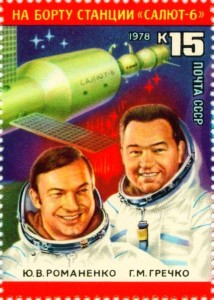 Lastly, I’ll mention Poljot.   Poljot got its name for actually producing the first watch worn in space, as part of the first manned mission to space in 1961 (Poljot didn’t adopt the name until 1964).  Don’t let the timing of the Poljot name fool you however.  Poljot watches were first produced out of the First State Watch Factory, which was the first Soviet created watch company developed in 1930 at the direction of Stalin.  It was only after the successful first space mission that the Poljot name was created.  Here’s a link to a really cool 1980’s Poljot featuring a 17 jeweal manual wind movement.

I won’t venture to present much more of a history than this, but rather add that I find the styling of Soviet era Russian watches to be just amazing, and their unique history to be equally so.  The rich history of these watch brands is reflected in their sometimes nationalist aesthetic and truly unique take on watch design.  If you are at all interested in learning more about Russian watches and their history, I would strongly suggest taking a look at Mark Gordon’s website, where he presents his mind boggling collection of Russian watches and clocks (Mark also is in the greatest interview I’ve ever seen.  I strongly suggest you watch the whole thing).  In addition, there is Russian Times, a site with outstanding photography of some beautiful pieces.  Lastly, I would also like to direct you to the watchuseek forum for Russian watches.  Here you will find some fascinating conversations and great examples of Russian timepieces and historical documents, including some amazing vintage watch catalogues.

Author Zach Weiss
Zach is the Co-Founder and Executive Editor of Worn & Wound. Before diving headfirst into the world of watches, he spent his days as a product and graphic designer. Zach views watches as the perfect synergy of 2D and 3D design: the place where form, function, fashion and mechanical wonderment come together.
wornandwound zsw
Categories:
Guides
Tags:
mark gordonpoljotraketarussian watchesstalinvostok
Related Posts
Article / Guides