One of the most definitive design elements of a chronograph–perhaps other than the addition of pushers to the side of the case–are the sub-dial totalizers tracking elapsed time. Beyond their functionality, these sub-dials go a long way in differentiating chronographs from all other types of watches, with the complication lending itself to some incredibly beautiful design. However, there are limitations to that design, and those limitations stem from the movement itself–the dial layouts are often dependent on the technical specifications of the movement.

In our third part of Chronography, we’re going to take a look at 5 dial arrangements–from chronographs featuring no registers all the way to four–as well as some of the famous movements that made them possible.

Though rarer than most other variants, there are chronographs without sub-dials altogether. These watches operate in a way that most resembles a stopwatch, with a centrally mounted seconds hand tracking elapsed time. Later takes on this chronograph include a centrally mounted minutes hand for further functionality when measuring longer periods of time (in this case, a span of 60 minutes). One of the most iconic examples of the latter configuration is the Sinn EZM 1, a military chronograph powered by the great Lemania 5100 (manufactured since 1978 and discontinued sometime in the mid-2000s by the Swatch Group). The watch has four hands mounted to the main dial–two for basic timekeeping, and two additional hands serving as the seconds and minutes counters for the chronograph. It’s a stunning austere design that perfectly blends form and function, and it makes reading the chronograph supremely intuitive.

Today, Austrian watchmaker Habring produces a beautiful take on this style in the form of the Chrono COS ZM. Based on a highly modified Valjoux 7750, Habring’s caliber A08COS allows for centrally mounted seconds and minutes counters operable without pushers, with all functionality instead built into the crown.

Single register chronographs generally feature a centrally mounted seconds hand with a separate sub-dial for tracking elapsed minutes. It’s a highly legible layout that lends itself to beautiful symmetrical design, and in terms of daily functionality it’s all one needs in a chronograph. Seiko has throughout its history produced a number of stunning single-register chronographs, with the 6139 being the most iconic of the bunch. The 6139 is no doubt a legendary movement, holding the distinction of being the world’s first automatic chronograph to be worn to space. It is also arguably the first automatic chronograph movement ever made, though there is enough contention there that I’ll just leave it at that. History aside, the 6139 has an incredibly solid build, featuring a column wheel with a vertical clutch and a day/date function.

An interesting take on the single register chronograph is one where the sub-dial is stacked, with two units of elapsed time being measured across a single register. In 1971, Seiko unveiled the 7016A, an automatic chronograph movement with a 30-minutes totalizer and a 12-hours totalizer positioned on a single sub-dial at 6 o’clock. (Quick side note: the Enicar Mantagraph is a rebranded Seiko 7016, sharing both the movement and case.) Today, Single register chronographs are quite rare, and the few being produced are generally based on pre-existing movements with just some of the sub-dials removed. The Oris Chronoris is one such example, as is the Stowa Flieger Chronograph.

When one thinks of vintage chronographs, the two-register layout immediately springs to mind. This layout generally had a running small seconds sub-dial at 9 o’clock, and a minutes totalizer at 3 o’clock. It would not be wrong to say that it was the most common layout for a chronograph throughout much the 20th century, and countless companies from Landeron to Seiko have produced their own two-register chronograph movements. Some famous examples include the Valjoux 7734 (and by extension, Poljot’s Calibre 3133), Seiko’s 6138, the Venus 175 (as well as the Seagull ST19), and of course, the Calibre 11–the other “first” automatic chronograph movement. The 6138 and Caliber 11 are actually interesting departures; both feature an added 12-hour register and eschew the running seconds altogether. In the case of the Caliber 11, the two sub-dials are aligned horizontally, whereas the 6138 features sub-dials positioned along a vertical axis (with the exception being the bullhead variants, which have a horizontal orientation).

Today, two-register chronographs are not nearly as common as they once were, but there are some interesting examples. Hamilton’s H-31 caliber is one, and it’s a movement based on the Valjoux 7753 but modified to feature a two-register layout and a 60-hour power reserve. The Hanhart Pioneer Monocontrol is another interesting 2-register chronograph built upon a heavily adapted Valjoux base, with modifications from La Joux-Perret to achieve monopusher functionality. Another way to creating a 2-register chronograph is through the use of chronograph modules. The most common example of this is the Dubois-Depraz module combined with the ETA 2892. There are, however, a number of disadvantages to going the modular route. Serviceability is one, as most watches with this modular design need to be serviced by the manufacturer (most watchmakers have great difficulty dealing with modular movements). And in terms of functionality, these are generally regarded as inferior to fully integrated chronograph movements, as they have to pull more energy from the base movement to generate the torque needed for the chronograph to work properly.

Today, chronographs with three registers are by far the most common sort around. This is in large part a result of the Valjoux 7750 being the premier mass-produced automatic chronograph movement on the market (even with Swatch Group ending sales to third-party brands). It’s a caliber that has been used and adapted by countless brands with varying levels of finishing and modification. You’ve probably heard this before, but it’s undeniably one of the workhorses of the watch industry. So much so, in fact, that the positioning of sub-dials at 3, 6, and 9 o’clock–the standard layout of the 7750–is commonly referred to as a Valjoux arrangement. In this setup, there is a running seconds hand at 9, a 30-minute totalizer at 12, and a 12-hour totalizer at 6. 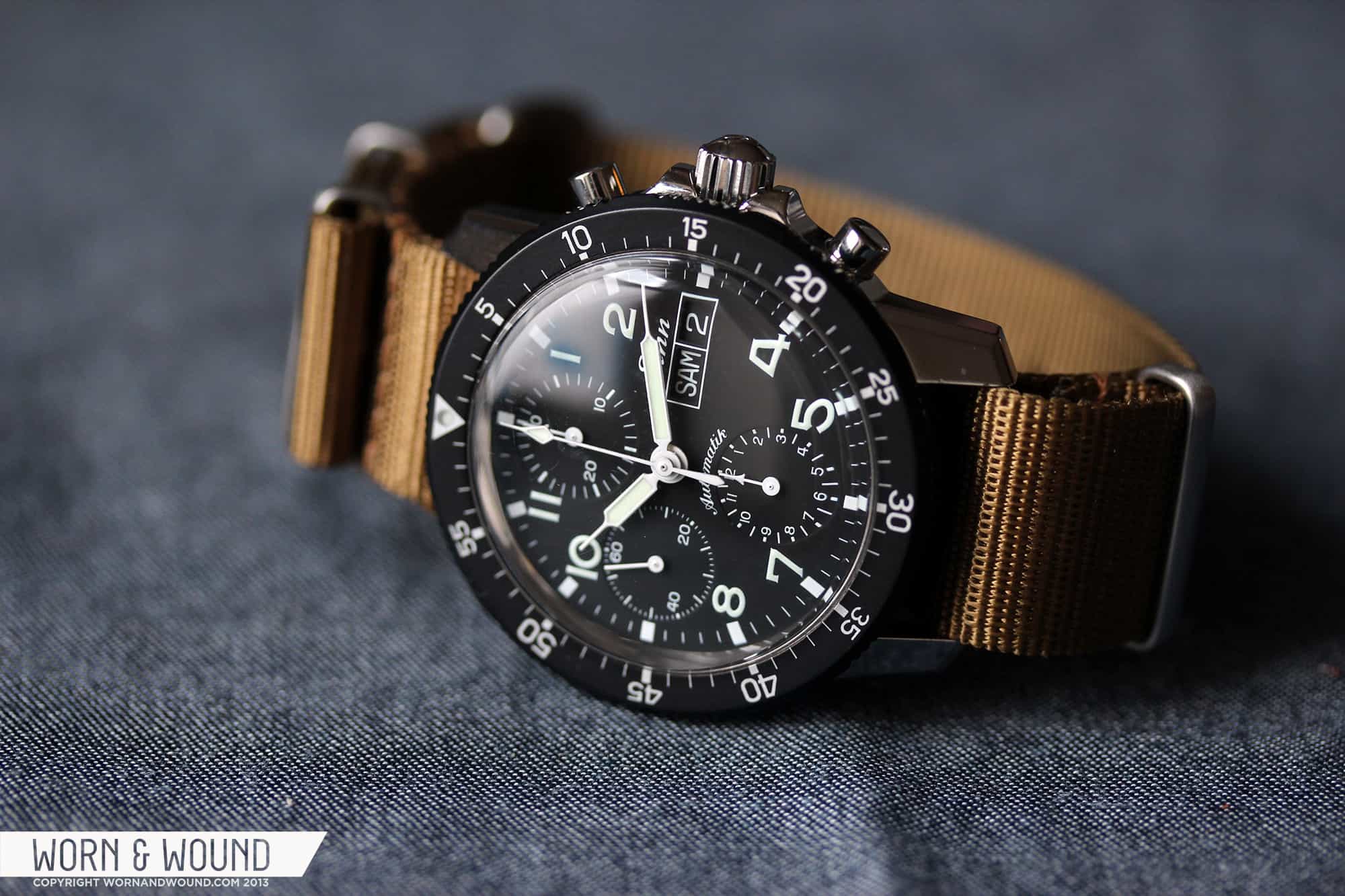 A second layout has the sub-dials at 3,6, and 9, and it’s an arrangement that can be seen in a number of different, historically important chronographs. The Omega Speedmaster is one such watch, featuring the manually wound Cal. 321 (and later, the 861/1861). There are also all the great ’60s chronographs from brands like Rolex, Heuer, and Universal Genève powered by the venerable Valjoux 72. And of course, we can’t forget the Zenith El Primero, the third “first” automatic chronograph developed in ’69.

Today, the Valjoux 7753 features the same horizontal layout, though some companies will simply modify a 7750 to the same affect (likely due to availability constraints). This one is a bit of an outlier because there aren’t really any chronographs with four registers. There are, however, chronographs with an added complication–calendars, moonphases, power reserves, 24-hour indicators, etc–filling up a fourth sub-dial. Universal Genève was known for producing such watches, the tri-compax, with the Caliber 281 being one of their most renowned movements to feature a full calendar module.

Beyond just adding another complication, some companies have used the fourth dial as a way to increase legibility in what could otherwise be a very busy dial. The Kairos Chronoswiss, for example, uses the additional sub-dial as a basic timekeeping dial, with only the chrono seconds hand mounted to the center of the dial.