There’s no denying the longstanding popularity of a good Flieger watch. They’re one of the earliest military watch styles, and have remained in the horological lexicon since their inception. Originally based on a German WWII military design spec, Flieger watches were made for pilots to wear in the cockpit. There are five original manufacturers: A. Lange & Söhne, Laco, Stowa, Wempe, and IWC.

Chronometer testing for supreme accuracy, a robust and utilitarian 55mm case, and a long riveted strap designed to fit over a flight jacket were strict requirements of the design. On the dial, there’s a triangle at 12:00 with a dot on both sides so the wearer could quickly determine where 12:00 was and which way on the dial was up. A generous onion-shaped crown was necessary for making adjustments while wearing thick gloves. All of the original watches looked nearly identical because they had a strict spec to follow, though they were manufactured by different companies. Laco still makes a true to the original design, including the large 55mm case with a hand winding movement. It’s about as close as you can get to owning an original flieger fresh out of assembly from one of the five original brands without breaking the bank.

Modern flieger watches still largely stick to that classic template, but take their own liberties in design to stand out from the pack. Today, we’re taking a look at ten great Fliegers — some classic, some modern, but all worthy of the watches they’re inspired by. 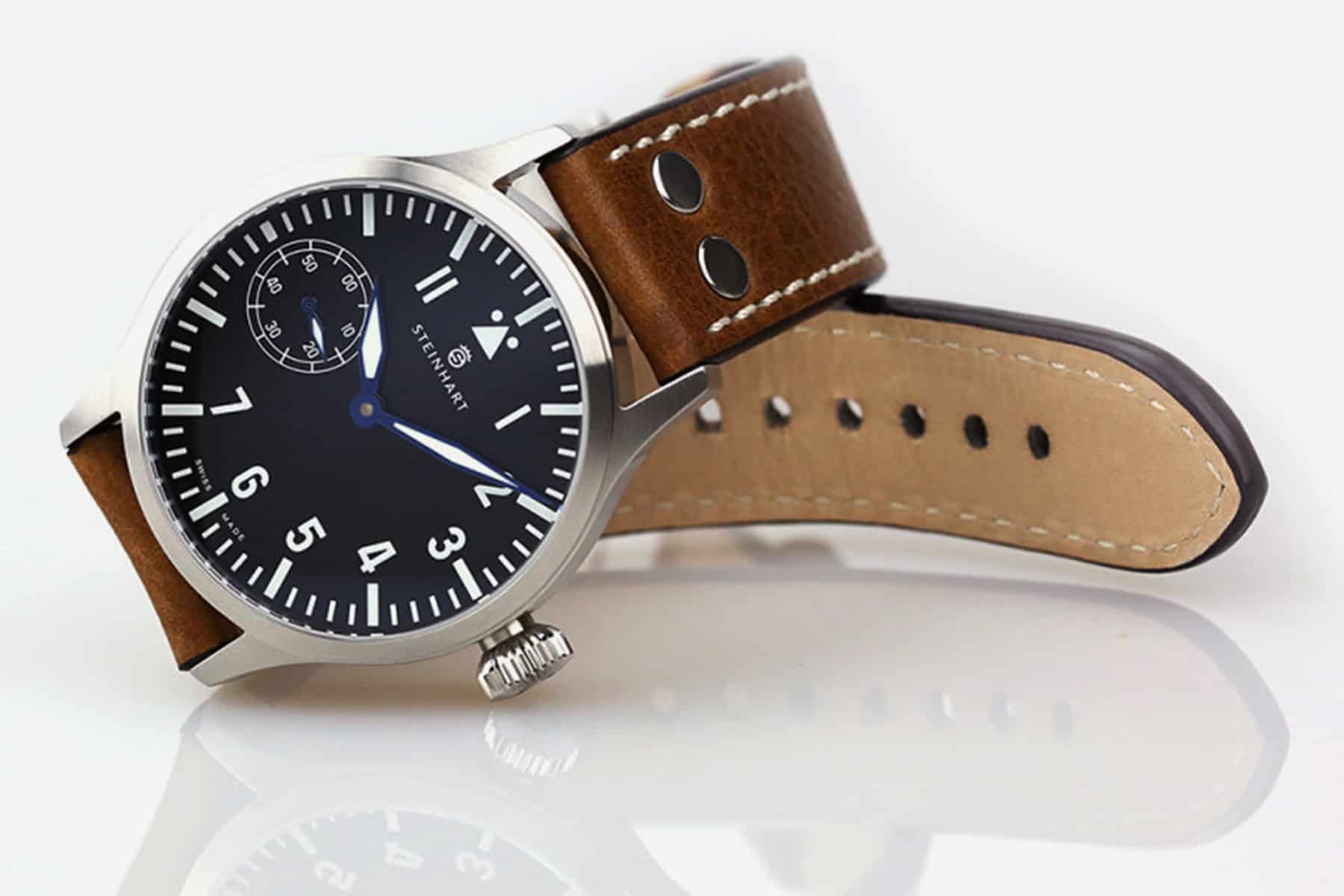 Steinhart has long offered serious bang-for-the-buck, and that’s especially true with their expansive “Nav B-Uhr” line. One of the longstanding models in this family of watches is the Nav B-Uhr 44 Handaufzug, a 44mm, Unitas 6497-powered hand-cranker with a small-seconds sub-dial at 9:00. At around $430, you get a timeless design and a solid Swiss movement that’s a joy to look at and operate. While there are certainly more “authentic” options on this list, like the watch right below this one, it’s hard to argue with the incredible value Steinhart offers here. The “Paderborn” is another offering from Laco. While it still looks the part of an authentic Flieger watch, the size is much more wearable by modern standards. Measuring in at 42mm, there’s still plenty of watch to go around, but it’s not quite as gargantuan as the 55mm beast we covered above. You may notice that the watch looks a little different, too, thanks to the “type B” dial design. Instead of hours at each index, it counts up in 5 minute intervals. There’s an inner ring with the hour markings on it and a shortened hours hand that stays within that small ring. The Laco Paderborn features a dark sandblasted case with a domed and anti-reflective sapphire crystal, Super-LumiNova C3 paint throughout, and a riveted brown calf leather strap. This flieger is Stowa’s classic 40mm pilot’s watch — a more wearable version of the classic large pilot’s watch. It features the original spec black dial, which is highly legible thanks to the contrasting white markings throughout. The hour and minutes hand are heat treated to achieve a shiny blue hue and filled with Superluminova C3 lume so they’re easy to read in light or dark conditions. Inside, there’s an automatic ETA 2824-2 top-grade movement that’s good for 38 hours of power reserve with hand winding and hacking capabilities. Around the back of the case, you’re treated to a view of the movement where you can observe the engraved handmade rotor and some basic but well implemented decoration. Stowa’s Flieger 40 also features slightly curvier lugs than the original Flieger watches, giving it a more modern appearance. At just over $1,000, this watch represents a solid value from one of the original Flieger watch manufactures. Adding some functionality to the classic Flieger design is the Flieger Classic Chrono from Stowa. This chronograph measures in at a very wearable 41mm. The dial is largely similar to a classic pilot’s watch, with the exception of the large sub dial at 3:00 that tracks a 30-minute interval for the chrono function. The oversized crown is flanked on either side by chrono pushers that you can use to activate the Valjoux 7753’s timing function. If you’re looking for a chronograph that still maintains a classic Flieger design, the Stowa is an excellent option. In addition to the chronograph movement, the watch is built on a solid set of base specs (stainless steel case, heat-blued hands, Super-LumiNova on the dial and hands, and premium riveted strap) that you’d expect from Stowa. Switching things up a little is the Archimede GMT Bronze. This 42mm watch is housed in a unique bronze alloy case that measures in at a surprisingly thin 9.5mm. Adding some additional functionality is the Swiss ETA 2893-2 GMT movement with date display. A bright red GMT hand allows you to track another time zone and the date at 6:00 is unobtrusive and lends the dial a bit of symmetry. GMT watches can sometimes appear overly busy, but the classic Flieger design utilized here keeps things clean and legible. Additional features like an oversized and textured crown, blued steel hands, and luminous paint for easy legibility in the dark round out this finely crafted GMT watch from Archimede. Sinn’s 856 B-Uhr is a modern take on the Flieger aesthetic. Made in Germany, this watch is crafted with a bunch of Sinn’s proprietary technology packed inside. For example, the watch’s stainless steel case is “Tegimented” — a hardening process that makes the case impervious to most everyday scratches. Inside the case, there’s a humidity-controlling copper sulfate capsule embedded into one of the lugs. Should any water get inside the case, the capsule turns dark blue, indicating that it’s time for a service. As an additional protection, the case of the watch is filled with inert Argon gas to keep the oils in the movement from reacting with the atmosphere. As a modern expression of a traditional Flieger, you’ll appreciate the more contemporary take on the B-dial variant we already saw above, this time rendered in vintage-tone luminous paint (though it feels more just like a cool color choice and not “patina”). As far as modern flieger-style watches go, Sinn is one of the best out there. Rock solid construction, extremely wearable proportions, and plenty of Sinn’s modern watchmaking tech — it’s a great package. This blacked-out watch from Damasko is an interesting take on the Flieger. While it clearly draws inspiration from pilot’s watches, Damasko took a much more modern and aggressive approach to the design of the watch. The ultra-durable, ice-hardened steel case is treated with a black “Damest” coating for additional durability and a sleek look. The DA46 is customizable to the preferences of the owner: Damasko lets you choose from a variety of straps and even two different bezel offerings (a 12-hour bezel or a more traditional 60-minute counter) to make the watch your own. The DA46 measures in at 40mm in diameter for the case, expanding slightly to 41.9mm at the rotating bezel. Powering the watch is a Swiss ETA 2836-2 elabore-grade movement with 38 hours of power reserve. A flat sapphire crystal prevents scratches to the glass, while the 100 meter water resistance rating is ideal for a wide range of activities in the water or out. Fortis’ Pilot Classic Small Seconds is an elegant take on the Flieger. While it could still hold its own in a cockpit, the 40mm stainless steel case is polished to an elegant shine. While most other pilot’s watches feature a brushed or a blasted finish, the polishing on the Fortis gives it an elevated look while remaining sporty. Inside the watch, there’s an ETA 2894-2 automatic movement, visible through the mineral glass case back. The dial still features the signature triangular marking at 12:00, but takes some liberties with the design of the handset and numeric indices. There’s also a small seconds indicator at 6:00 with an integrated date display. While you can still see the Flieger DNA running through the Pilot Classic from Fortis, it’s definitely a more modern take on the design. The Spitfire series from IWC draws inspiration from the legendary Mark XI navigation watch built for the British Royal Air Force in the 1940s. While the watch may pull from the past, an overhauled spec sheet brings the Spitfire firmly into the modern era. For starters, it features a new movement from IWC’s Caliber 32000 family, with an impressive 72-hour power reserve. It’s housed in a wearable 39mm stainless steel case with a premium brushed finish throughout. On the back, you’ll find a high quality engraving of the watch’s namesake — the Spitfire fighter plane. A clean dial with just the right amount of vintage-style lume makes this one look like an instant classic. At $4,450, the Spitfire isn’t cheap, but the new movement and luxury-level finishing help justify the price tag. It would be hard to write a guide about Fliegers without mentioning the classic IWC Big Pilot. Part luxury watch, part mechanical achievement, the Big Pilot is both big in size and in attitude. At 46.2mm and 15.5mm thick, this watch really packs a punch on the wrist. Inside the watch, there’s a 52110 Calibre IWC automatic movement that builds up to a 168 hour power reserve — that’s a full seven days! It’s finished with Côtes de Genève and perlage throughout, even through it’s protected by a solid steel case back. The numerals and hands are big, bold, and very easy to read. At 3:oo, you’ll notice the power reserve indicator with a scale from 1 to 7 days and a date display at 6:00. The case finishing is largely brushed, with a slim polished bezel around the dial. The large, onion-shaped crown is precisely cut and polished to a shine, and its size makes for easy operation. The Big Pilot is a modern classic that mixes traditional Flieger aesthetics with modern watchmaking technology and a premium, luxury oriented finish, making it highly prized by collectors.

Author Ed Jelley
Ed is a Long Island-based writer and photographer with an affinity for watches, fountain pens, EDC gear, and a great cup of coffee. He’s always looking for the best gear for the job—whether it be new watch, pen, flashlight, knife, or wallet. Ed enjoys writing because it’s an awesome (and fulfilling) way to interact with those who share the same interests.
Categories:
Guides
Tags:
fliegerGuides
Related Posts
Article / Multi-Part Series