Given their penchant for engineering and innovation, it should come as no surprise that some of the first wristwatches ever created for the explicit purposes of outfitting soldiers were either designed by or commissioned for the German government.

In 1879, the German emperor Kaiser Wilhelm I placed an order with Swiss watchmaker Constant Girard (of Girard Perregaux fame) for 2,000 wristwatches to outfit his naval officers. The watches, which were ordered in two series of 1,000 pieces each and produced in 14k gold to avoid rust, represent the first significant commercialization of the wristwatch, which wouldn’t become truly popular amongst men until after World War I. The watches are also known to have featured shrapnel guards and black dials with luminous numerals, though as none have yet to be recovered fully intact, Girard Perregaux produced a modern mock-up example for their museum from historical records.

Despite its introduction in 1879 to the German navy, the wristwatch didn’t seem to catch on in German military circles during World War I (1914-1918) as it had in limited ways in the British and American militaries.

However, during World War II, small, time-only wristwatches were used by the German military and issued in large numbers. Rather than designing a specification for a wristwatch and then farming out the design and manufacturing to local watch manufacturers via a tender, as was the norm in the United States, the German government instead provided requirements to a contractor, who in turn sub-contracted suppliers to provide watches that met said requirements.

These watches were typically between 31 and 34 millimeters in diameter and featured either black or white dials with luminous numbers and hands (though sometimes lume was not featured). Plastic crystals and fixed strap bars were the norm, though some examples did feature spring bars, and case backs were either snap-back (earlier examples) or screw-back (later examples) in chrome or stainless steel cases.

All examples featured manually-wound, minimum 15-jewel movements with either sub-seconds (earlier models) or sweep seconds (more popular by 1942). Many companies utilized the Schild AS1130 movement, which was evidently ubiquitous enough amongst German military watches as to it earn the moniker “Wehermachtswerk,” or “Wehrmacht movement.” Sometimes a particular manufacturer would use its own movement in place of the AS1130, and as the number of manufacturers who produced these watches is long, it’s anybody’s guess as to how many different movements were utilized (there is no definitive list or precise number of manufacturers known, but the number seems to be well over 30).

These timepieces are commonly referred to as “DH watches” by collectors in reference to their case back markings, which often featured a “D,” followed by a serial number, followed by an “H.” Though some maintain that “D.H.” stands for “Deutsches Heer” (German army), Konrad Knirim, who literally wrote the book on German military timepieces, theorizes that it stands for “Dienstuhr Heer,” or “service watch, army.” However, as there are records of DH watches being provided to Luftwaffe personnel (air force) and Kriegsmarine personnel (navy), the true meaning of the abbreviation is still up for debate (an interesting aside is that the watches provided to Kriegsmarine personnel serving on U-Boats often featured fully-lumed white phosphorus-coated dials with black, non-lumed numerals and state “K.M.” on the dial). Many of the Swiss manufacturers (Longines, Record, Omega, IWC, and others) producing DH watches for Germany were also producing watches for Allied personnel.

While infantrymen and sailors were outfitted with these small, simple, and essentially off-the-shelf Swiss and German timepieces, Luftwaffe pilots enjoyed the use of a custom-engineered behemoth of a timepiece: the Beobachtungs-uhren, or observation watch, commonly referred to as a “b-uhr” (“b-uhren” is plural). In 1935, as Germany re-armed right under the noses of the great world powers, the Reichs Luftfahrtministerium (Reich Ministry of Aviation) designed a watch specification from the ground up. 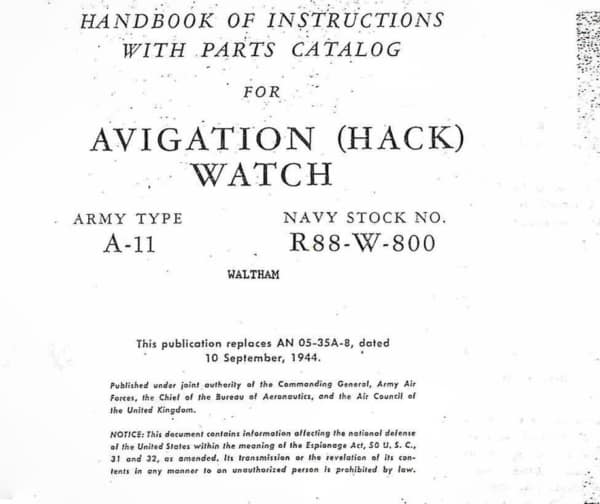 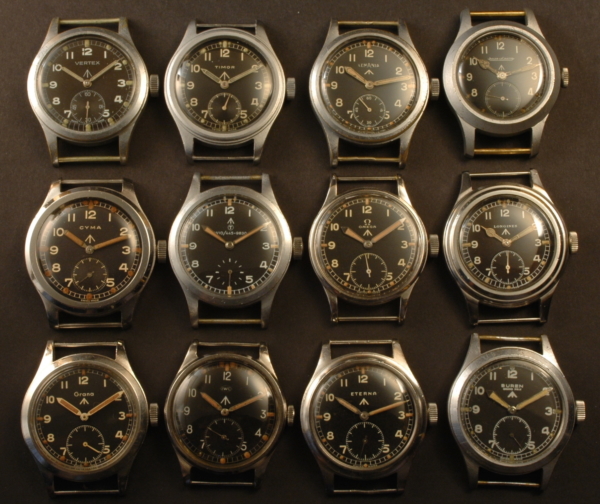 Originally including an hour angle indication such as that of the famous Lindbergh watch, the specification was updated until deemed just right, at which point it called for the following features:

The watches were highly regulated to chronometer standards and would be provided to a Luftwaffe navigator for a specific mission, after which they were returned. A signal from the control tower would allow the navigator to set his watch precisely in time with the Deutsche Seewarte, the German Naval Observatory, and hacking seconds allowed for the utmost precision in time-setting.

Five manufacturers produced the watches: A. Lange & Söhne, Wempe, Lacher & Company/Durowe (Laco), I.W.C., and Walter Storz (Stowa). Lange examples featured their in-house cal. 48 and cal. 48.1, and Laco used its Durowe cal. 5, which constituted the two German-made movements from amongst the manufacturers. Wempe and Stowa chose to use Swiss movements (the Thommen cal. 31 and Unitas cal. 2812 respectively), and I.W.C. used its own cal. 52T S.C. In 1938, Wempe had purchased the Chronometerwerk in Hamburg, which allowed them to assist Lange and Laco in watch production when these two manufacturers had trouble meeting demand (Lange also sent ébauches and cases to outside manufacturers for assembly and regulation).

Given the number of companies producing reproductions of the B-uhren today (albeit generally with smaller case dimensions), it’s evident that the original observation watch designed for the Wehrmacht is perhaps one of the most enduring and iconic of all military timepieces ever produced.

A second watch developed for Luftwaffe personnel was the Fliegerchronograph produced by Hanhart and Tutima (at the time, UROFA-UFAG, or Uhren-Rohwerke-Fabrik Glashütte A.G-Uhrenfabrik Glashütte A.G). Both single and dual-button versions of the chronograph were made, with production commencing in 1939 for Hanhart and 1941 for Tutima. All versions featured nickel-plated brass cases, black dials with white Arabic numerals, 30-minute and running second counters, central flyback chronograph seconds hands, and either knurled rotating or smooth fixed bezels. Dual-button versions featured the cal. 41 by Hanhart or cal. 59 by Tutima, and mono-pusher variants featured the Hanhart cal. 40. A well-known variant of the watch featured a red-coated chronograph button, and some versions featured telemeter scales that were issued to naval forces (the Hanhart “TachyTele,” introduced in 1939).

And that wraps up Part 1. Stay tuned for Part 2 where we’ll go over post-war German military watches.

Author Oren Hartov
Oren Hartov is the watches editor at Gear Patrol, a contributor to several other publications, and a graduate of the Berklee College of Music. He is a reserve paratrooper in the Israel Defense Forces and enjoys music, history, archaeology, militaria, scuba diving, languages and travel. He is of the opinion that Steely Dan’s “The Royal Scam” may in fact be a better record than “Aja,” but he’s not positive.
Categories:
FeaturedGuidesMulti-Part Series
Tags:
GermanyMilitary Watches of the World
By clicking “Accept All”, you consent to the use of ALL cookies. However, you may visit "Cookie Settings" to provide a controlled consent.
Cookie settings Accept All
Manage consent