German watchmaker Junghans has a storied history that goes back nearly 155 years. Though Junghans today is perhaps best known for its iconic Max Bill line, the firm’s broader catalogue is actually quite varied and boasts some incredibly beautiful pieces. Particularly exciting is the classically styled Meister line, which offers truly wonderful watches in terms of design, quality, history, and price. With Baselworld 2016 right around the corner, Junghans has just announced its brand new Meister Driver Handaufzug series built around two watches that pull their aesthetic influence from automotive history. Junghans isn’t the first brand to spring to mind when considering horology’s ties to the automotive world. Nor is it the second, third, or fourth (you get the idea). But Junghans isn’t just jumping on the petrolhead bandwagon; the relationship drawn here actually has some historical basis. In 1905 Dr. Oskar Junghans–son of company-founder Erhard Junghans–developed and patented a speedometer, and throughout the 20s and 30s Junghans manufactured car clocks out of their factory in Schramberg. Oskar’s brother Arthur was also a noted car enthusiast and close friend of Wilhelm Maybach and Gottlieb Daimler, and he even bought one of the first Daimler test cars in 1892. And today, Junghan’s owners Dr. Hans-Jochem Steim and Hannes Steim are huge car enthusiast in their own right, owning a collection of classic automobiles that spans nearly 110 years of automotive history. Knowing all this, it’s hard to believe Junghan’s hasn’t already produced an entire range of automotive-inspired watches.

The Meister Driver Handaufzug series launches with two references, neither of which are directly inspired by a single car, but rather an amalgam of sources. Both are styled after dashboard speedometers, with each variant differing not only in color but also in overall design. The ref. 3607 features a lacquered black dial contrasted with cream-colored hour markers, hands, and concave sub-dial. The layout is rather traditional, featuring large hour numerals and a smaller outer track that denotes minutes, yet it still achieves the speedometer look through its use of stylized numerals and color. 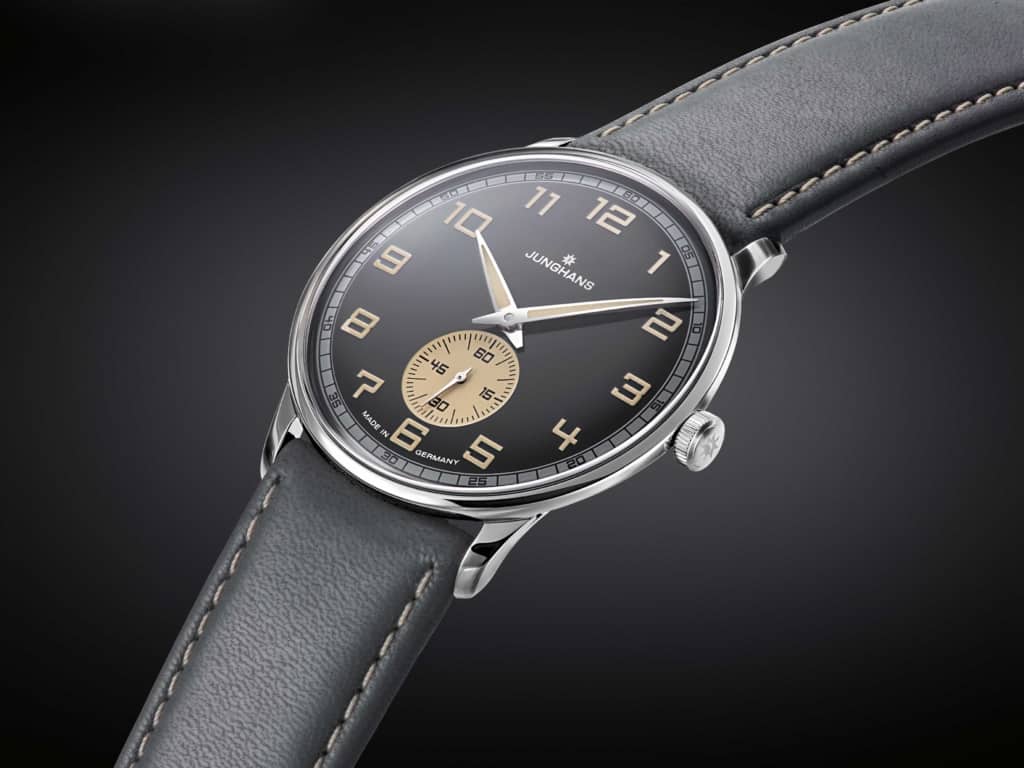 The ref. 3608 flips that formula, moving the hours out to the minutes-track and uses large numerals to mark 5-minute intervals. In terms of color, the 3608 contrast a light-grey outer ring with a cream center, which extends down to the sub-dial. Both color schemes are immediately attractive and inspired by the Maybach DS8 Zeppelin, a rare luxury car produced in 1932. Both designs work because they don’t hit you over the head with automotive styling cues, and yet they retain their intended influence.  That being said, the grey-cream combo is the winner in my book. Despite being somewhat of an aesthetic departure for the brand, the series retains many of the classic elements found across the brand’s catalogue. Both watches feature domed dials topped off with matching plexi-crystals coated in SICRALAN, which should make the glass more resistant against scratches. The cases, coming in at 37.7mm with a height of 7.3mm, are equally familiar, and based on product images and given dimensions I can surmise that it is the same case found on other watches in the Meister range.

As the name suggests, powering the collection is the manual-wind J815.1 caliber, which is a rebadged Peseux 7001 with blued screws and a branded bridge. The 7001 is a top-grade hand-cranker used by numerous mid-tier brands, and is perhaps most famous for being the base upon which Nomos developed their iconic alpha caliber, so you’re getting a quality movement which, by the way, you can admire through a mineral case back.

Overall, this is an exciting departure for a brand known primarily for producing minimalist timepieces. The classic styling, nod to automotive history, and tempered sizing make for a very tempting watch, as does the incredibly reasonable price tag which is expected to be around $1,250.  Furthermore, Junghans is expected to unveil a chronograph variant at Baselword, so stay tuned for that.

The Junghans Meister Driver Handaufzug range is expected to release in September 2016.

Author Ilya Ryvin
Ilya is Worn & Wound's Managing Editor and Video Producer. He believes that when it comes to watches, quality, simplicity and functionality are king. This may very well explain his love for German and military-inspired watches. In addition to watches, Ilya brings an encyclopedic knowledge of leather, denim and all things related to menswear.
ryvini
Categories:
News & Releases
Tags:
junghansMeister
Related Posts
Article / News & Releases

A Look at the Junghans Meister Line