A few weeks ago, we kicked off our Military Watches Of The World series with America Part 1, focusing on watches from World War I through the early ’60s. In Part 2, we’ll feature watches issued to the U.S. military from the Vietnam era through today.

With the release of the MIL-W-3818B spec in 1962, the fog lifts once again and there is a clear, traceable history of issued watches. This revision was meant to simplify the requirements for a 17-jewel, hacking wristwatch with an extended service life, and the watch ultimately produced under this spec was the Benrus DTU-2A/P. It featured a parkerized steel case, a black dial with numerals and indices in white and an inner ring with military time, hands filled with green luminescent paint (tritium), an acrylic crystal, and an orange-tipped second hand also painted with tritium. The movement featured 17 jewels, hacking, a 36-hour power reserve, and accuracy of +/- 30 seconds per day.

The MIL-W-3818B grew into the GG-W-113, a spec released in 1967 that was nearly identical to the MIL-W-46374 A-D revisions (I’ll get to these next) and was issued concurrently for many years. The differentiation was that it featured exclusively a 17-jewel, manual-wind and hacking movement and a “sterile” dial for legibility. These watches were meant for issue to pilots and were produced by Benrus, Hamilton, Marathon, and Altus.

In 1964, the MIL-W-46374 spec was published calling for an accurate, disposable, and non-maintainable watch in either a plastic or metal case to be issued to infantry and other ground forces. Most of these featured the numeral “12” painted in tritium, though some examples exist without this detail.

The MIL-W-46374 spec evolved over time, with subsequent revisions labeled A through G. Revision A, for example, which was released in 1968, called for the option of a “corrosion resistant steel” case (though this requirement was later changed to “stainless steel” in 1973). Plastic versions of Rev. A watches were made by Westclox and Benrus between 1970 and 1976, and the metal versions were produced by Hamilton.

Revision B, published in 1975, added a requirement for the radiation symbol and “H3” on the dial to indicate the usage of tritium, as well as the words “Dispose Rad. Waste” on the case back and a coating for the hands to preserve the tritium. These watches were generally made in steel, although a rare plastic Timex version was produced only in 1982.

Revision C, published in 1983, saw the introduction of Stocker & Yale into the mix of manufacturers making issued watches for the U.S. This model, whose spec called for updated maintenance standards, was made in plastic by Stocker & Yale and dubbed the “SandY.”

Revision D, published in 1986, would spawn five different variants, including the highly accurate Type 1 that constituted a serious departure from many of the plastic, disposable, non-maintainable versions of the MIL-W-46374. Though we won’t go through all the iterations here, Type 2 is notable for being a plastic model, and Type 3 for being the first analog quartz specification. Rev. Ds were made by Hamilton, Stocker & Yale, and, most rarely, Marathon/Gallet.

Revision E, published in 1989, called for drastic changes in dial font, and the switch from tritium paint to tritium vials. These plastic watches were manufactured by Stocker & Yale and Marathon in several versions.

Revision F, published in 1991, was also produced in many different versions, with Type 6 being the most notable departure from previous specs. This “Navigator” watch features a better quality, hacking quartz movement with a rotating, GMT-style bezel, as well as updated special requirements for operating in various adverse conditions. These watches were produced by Stocker & Yale and Marathon.

The last revision of this spec, Revision G, was published in 1999, and saw the Department of Defense giving more leeway to the manufacturers to design watches that would live up to specific criteria; the government did require, however, that manufacturers clean up the dials of their watches, featuring only the radiation symbol and the H3 tritium symbol, and no manufacturer name or “U.S. Government,” as found on some Marathon watches.

A rarely seen larger cousin of the MIL-W-46374 field watch is the FAPD 5101 made by Hamilton. This watch, first issued in late 1969 or early 1970, was produced specifically for use by navigators in the U.S. Air Force, and thus features a slightly larger 36mm parkerized case and the 17-jewel, center-seconds Hamilton caliber 684. The 684, which also featured a fine regulating screw and anti-magnetic dust cover, was developed specially for the FAPD 5101 and appears in no other military or civilian wristwatch model.

There have been several dive watches used by U.S. forces over the years, but the Tornek-Rayville is something of an outlier in this survey, as it wasn’t produced by a U.S. manufacturer. This watch, issued in the early 1960s under the MIL-W-22176A spec, was essentially a rebranded Blancpain Fifty Fathoms with the name of the local U.S. Blancpain distributor on the dial. As the adverse effects of radium were just being discovered at this time and tritium was found to glow too dully, the Tornek-Rayville used Promethium 147 as a luminescent paint, which featured a 2.5-year half-life yet provided a strong glow. In the early 1970s, the MIL-W-50717 spec was released, which resulted in the famed Benrus Type I and Type II dive watches, produced from 1972 to 1980. These watches used steel one-piece, 43mm cases and the Benrus GS1D2 movement, a modified ETA 2620 automatic caliber with a 40-hour power reserve on a full wind. They were produced in limited numbers in several variations for Navy SEAL teams and possibly for other clandestine personnel, and are a perennial favorite of military watch collectors. As these watches have already been covered in an article on Worn & Wound, we will refrain from enumerating on all the specs, and we’ll simply direct to you to click here for more information. 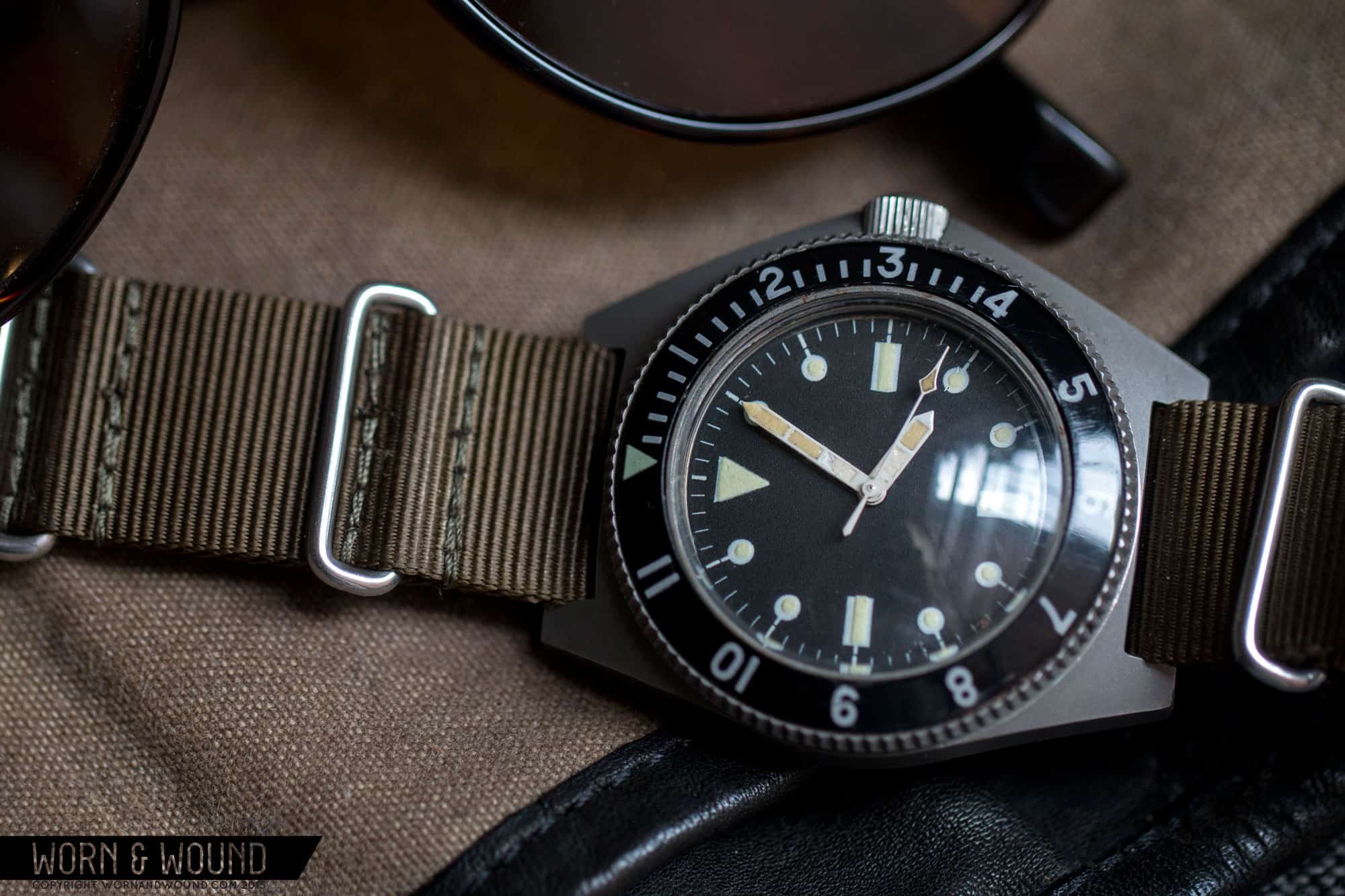 Special Note: It has been mentioned many times that despite detailed procurement orders for tens of thousands of watches being filed by the U.S. government, many, if not most soldiers in the U.S. army during the Vietnam War era were never issued watches. As the numbers of troops deployed to Vietnam eventually numbered in the hundreds of thousands, it seems conceivable that the military perhaps only issued watches to those personnel whom it felt absolutely required one, and decided to allow most soldiers to procure their own timepiece.

With the publication of the MIL-W-46374G, the concept of the Performance Standard was introduced, which was no longer a set of stringent specifications to which manufacturers had to build their watches, but rather a set of standards to which any watch submitted for issue had to conform. After Stocker & Yale stopped their production of military watches, this left only Marathon producing government-issue pieces for U.S. forces.

Since the wars in Afghanistan and Iraq began, the great majority of units in the U.S. military neither issue their troops a watch nor provide a budget for private procurement, and while some specialized units may have sufficient budgets to issue a timepiece to every member, the great majority of troops seem to simply buy and wear their own watch. It should be noted, however, that this practice is not new; the author has personally known, for example, a special operations aviation pilot who still wears the Rolex GMT Master 1675 purchased for him by his father in a PX in Southeast Asia, and a Special Forces soldier who wore a G-Shock for much of his service (the de facto military watch of choice today).

In today’s landscape, a watch, it would seem, is no less a critical piece of kit for the solider than it was 100 years ago—we simply mustn’t expect the government to pay for them!

Author Oren Hartov
Oren Hartov is the watches editor at Gear Patrol, a contributor to several other publications, and a graduate of the Berklee College of Music. He is a reserve paratrooper in the Israel Defense Forces and enjoys music, history, archaeology, militaria, scuba diving, languages and travel. He is of the opinion that Steely Dan’s “The Royal Scam” may in fact be a better record than “Aja,” but he’s not positive.
Categories:
Multi-Part Series
Tags:
Military Watches of the World
Related Posts
Article / Vintage

By Brandon Cripps 30.09.2015
When I think about all the things a military issued …
Article / Guides