To be honest, I don’t usually wear a digital watch.  I find the classic feel and analog dial of a mechanical watch to be far more rewarding and equally easy to use.  Digitals are usually reserved for more strenuous activities that require a more rugged timepiece.  That’s when I pull out my trusty G-Shock GX-56.  When I first heard about the Mutewatch however, it changed my expectations for a digital watch.  LED numbers, touch interface, one flowing piece, vibration alerts…this is interesting.  Today, having spent some time with the Mutewatch, I can safely say that it is truly unique and may be the start of a whole new category of watches. The Mutewatch case is one flowing piece of rubber.  There is no separate band, really no seams to speak of, and its screen is hidden under a translucent piece of rubber.  When the screen isn’t active, it’s invisible.  The time is only displayed on command, through a simple tap on the flat “screen” or a flick of your wrist. Functions of the Mutewatch are basic but ground breaking.  It seems that the Mutewatch has taken several cues from modern smart phones. Interaction with the screen is all controlled through touch.  You tap to activate the screen, swipe to scroll through modes, pinch to deactivate and delete, and touch certain points on the screen to increase and decrease the numeral displayed.

The Mutewatch also has a superior alarm and timer alert.  Unlike typical digital watches with annoying and geeky beep alerts and difficult to use controls, the Mutewatch provides a gentle vibration when the timer or alarm is activated.  This is a function found on every cell phone on the market today, and its been perfectly implemented in the Mutewatch. Staying with the timer function, I find to be one of the most innovative aspects of the Mutewatch.  Setting it is intuitive and effortless, as you simply tap the top or bottom of the digit you would like to adjust.  It also has a repeat function, allowing the timer to continue at a regular interval.  One practical application would be if you are giving a presentation and wanted a silent alert to remind you every 2 minutes to move on to your next powerpoint slide.  With the vibrating alert, you are the only person notified when the timer goes off.

The Mutewatch also contains an ambient light sensor located under the main screen, which will actively dim and intensify for low and high light situations, saving your eyes and battery.  The watch also has an accelerometer that senses wrist movement, which is used to activate the main display, as described above.  The list of functions included in the Mutewatch that are commonly found in mobile phones is staggering, and in each case they have been implemented beautifully. 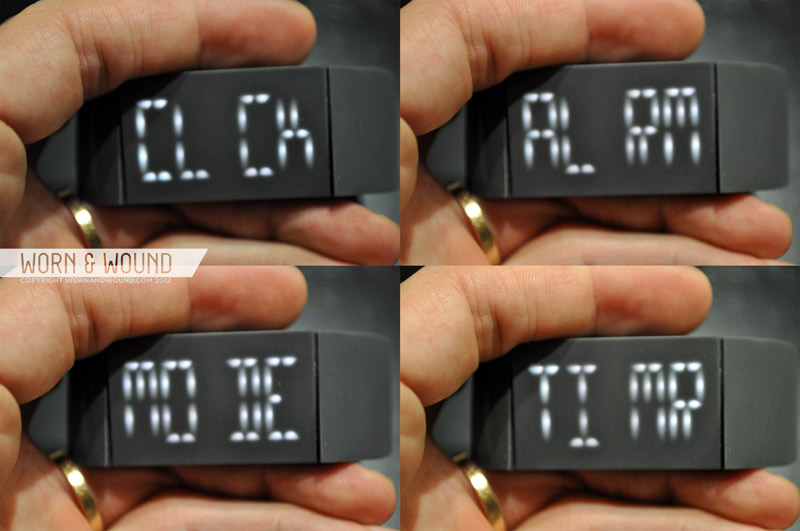 Wearing this Mutewatch is quite comfortable.  It provides a light feel and the case contains no seams, making it effortless to wear for long periods of time, or even to bed.  In fact, I find using the vibration alarm as a morning alarm to be much less abrasive than the iPhone ringer. 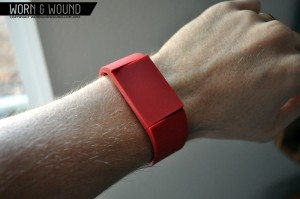 I got a chance to check out the red and the charcoal grey models of the Mutewatch.  Personally my favorite is the gray, as it hides any dirt accumulation and goes with just about everything.  Buttoning it up is a snap, literally.  To adjust the sizing there is a small metal slider which is pretty easy to move up and down and does stay put once you set it.

Unlike most digital watches with long-lasting but disposable batteries, the Mutewatch is intended to be charged on a regular basis.  While charging your watch is certainly something to adjust to, the watch does remind you that the battery is running low with “BATT” displayed on the screen.  Depending on how much you use it, the Mutewatch battery can last up to a week.  It is also nice that the Mutewatch charges via a USB port that is seamlessly integrated into the watch strap.  The use of a USB port was a very good idea, as you can charge it next to your phone on a nightly basis, or just pop it into your laptop. The Mutewatch is a fantastic concept, with incredibly innovative yet common sense functions that have all been implemented extremely well.  The tech featured is inspired by smartphones, and puts the Mutewatch into a whole new category. I really think this watch will evolve into new designs from Mutewatch itself and other companies that recognize the possibilities of this technology and design.  The best part of all, Mutewatch will be constantly upgrading the watch with new firmware.  Lets hope they put in a 12-hour function first.

The Mutewatch retails for $259 on amazon.com.

Thanks to Mutewatch for supplying the review watch.

Author Zach Weiss
Zach is the Co-Founder and Executive Editor of Worn & Wound. Before diving headfirst into the world of watches, he spent his days as a product and graphic designer. Zach views watches as the perfect synergy of 2D and 3D design: the place where form, function, fashion and mechanical wonderment come together.
wornandwound zsw
Categories:
Featured
Tags:
alarmdigitalMutewatch
Related Posts
Article / Featured