Today, we’re excited to bring you the first of hopefully a long series on interesting and largely affordable vintage dive watches by w&w friend, @vintagediver (head over to IG and give him a follow for great pics daily). Enjoy!

The 6105-811X was made from 1970-1977, and came in two slight variations. The early models from 1970 were labeled “water 150m proof” on the dial, and “waterproof” on the case back. At some point later that year, they changed the text to “water 150m resist” with “water resistant” on the back. This was inline with a change in nomenclature throughout the Seiko offerings. The “proof/proof” models are fairly rare, and command a definite premium over the “resist/resist” models.

This watch is one that I think has to be felt “in the metal” to be fully appreciated. Several years ago, before I had any Seiko divers, I saw the pictures and posts of devoted 6105 owners, and was really quite unimpressed. Over the years, the design started to grow on me, and I decided I had to have one, and see what all the fuss was about. Once I had one, it was love at first sight. The 6105 simply has a wrist presence that doesn’t translate into pictures. The build quality and finishing is exceptional, and definitely on par with other hi-end divers of the same period, like the Omega Seamaster 300 and the Rolex Submariner. Seiko was, and still is, a true manufacture, making everything in-house. Not only was the movement in-house, but Seiko even made their own oils, cases, crystals and such. The 6105 was a very popular choice with US military servicemen in the Vietnam war era, and was available from the PX stores (retail stores found on United States military installations) for soldiers. It was also famously worn by Martin Sheen’s character, Captain Willard, in the Vietnam war movie Apocalypse Now. 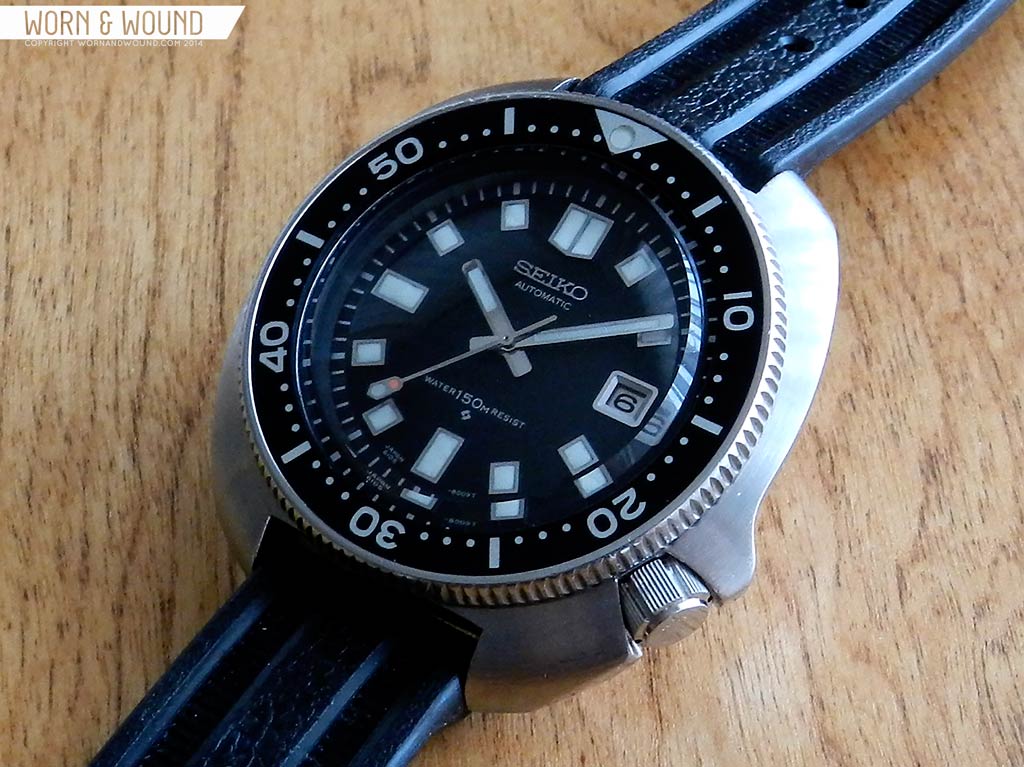 The case is a nice chunk of solid stainless steel, with a distinctive asymmetrical cushion shape. The crown is at 4 o’clock and is protected by the bulging crown guard, giving it a very unique and instantly recognizable geometry. The original factory finish is circular brushing on the top and polishing on the sides, with a nice sharp line delineating the two. The oversized crown is about 6.3mm wide, with shallow grooves covering the whole thing and six deep grooves for good grip. It features a “turn and lock” system that is unique to this model. After setting the watch, you push the crown in and turn it while still gently pushing and one of the big grooves will lock onto a pin that keeps the crown from turning. To be honest, I can’t really figure out the benefit of this, but it looks cool! 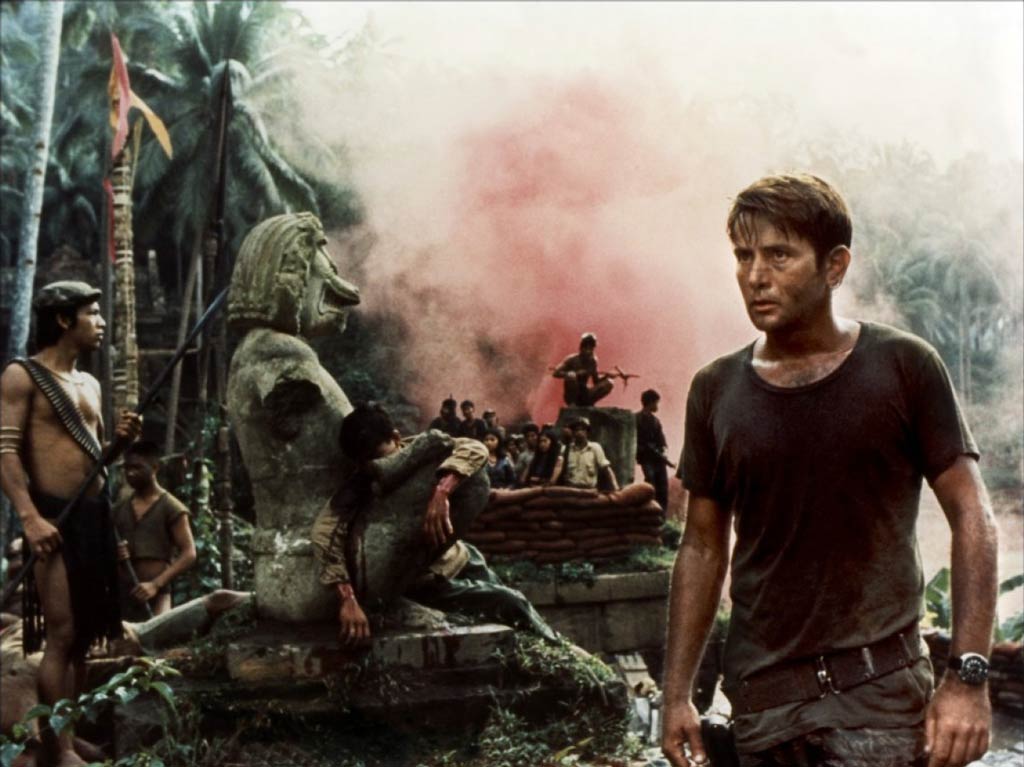 The crown is signed “->Lock”, which is pretty cool in itself. The case measures about 44mm wide by 47mm long with 19mm lugs. It’s an excellent size for most wrists, not too big and not too small. The shape of the case and case back sit very comfortably on the wrist, making it a very easy watch to wear despite it’s big size and smallish lug spacing. The coin edge bezel with aluminum insert rotates bi-directionally, and has a click ball mounted in the case that gives it 60-clicks in a full rotation. A rubber O-ring gasket gives it just the right amount of tension for great “bezel action”.  The crystal is a proprietary Seiko hardened mineral glass called Hardlex. It is a double domed type, with a very shallow dome on the outside (almost flat), and a more pronounced inner dome. These were (and are) prone to scratches, and cannot easily be polished. However, NOS crystals can be found, and there are aftermarket repros that can be had as well. Nothing makes a 6105 sparkle like a brand new crystal! Under that cool Hardlex crystal is a dial that is truly a work of art. It’s a beautiful matte black, with raised applied chrome markers that are filled with the proprietary Seiko lume material. There is a date window at 3 o’clock with a nice chrome frame.  Under the 12 is an applied chrome Seiko logo with “Automatic” printed in silver just below. Above the 6 it is signed “water 150m proof” or “water 150m resist” depending on the model.

The fine print below the 6 should read “Japan 6105-8009T”. There are many horrible fake dials out there, and lately there have been some very good fake dials showing up. The hour and minute hands are lume filled faceted steel baton style, while the second hand is a unique “stop light” style with two lume filled holes at the tip. The distal one is white lume like the hour and minute hands, and the proximal hole has a pale red color. The 6105 is powered by the robust Seiko caliber 6105B, a 17 jewel full rotor automatic that runs at 21,600 bph. It is not hand windable, but the automatic winding mechanism is so efficient that one flick of the wrist will start it running from a dead stop. One nice touch that is not often found in Seiko divers (vintage or modern) is that this movement hacks, meaning the second hand stops when the crown is pulled out.

This model originally only came with a rubber strap. There has been some discussion about bracelets being available as OEM from PX stores, but as far as I know this hasn’t ever been proven. The original rubber straps available were the XGL731, the ZLM01, and a third unmarked model. These original straps are quite rare today, and command huge prices when found. The strap on the 6105 in the pictures shown here is an XGL731 that I was lucky enough to acquire. It is incredibly soft and supple, much more comfortable than most modern rubber straps. The ZLM01 strap, otherwise known as a “waffle” strap due to its distinctive pattern, has been reproduced, and is available for those that want the OEM vintage look with a modern material strap. The 6105 has become probably the most recognizable and iconic of all the Seiko divers, which is saying something coming from a manufacture that is rich in dive watch history. While it is by no means scarce, it is indeed difficult to find in good, original condition. This was intended as a tool watch, and was generally worn as such by the folks lucky enough to have bought them new. They were rode hard and put up wet, so to speak, more often than not. Most original examples that are found on eBay have moderate to significant wear. The lume material is prone to getting what is commonly referred to as “black funk” on it. For some reason, the Seiko lume used tends to get this black growth on it when exposed to moisture intrusion, which is a bummer as it can’t really be removed (I’ve tried!). Another pitfall in collecting the 6105 is that they are often found with any number of aftermarket parts installed, most often fake dials/hands and replacement bezel inserts.

While these aftermarket parts have their place in restoring what many would consider unwearable condition watches, it can be problematic for those that don’t know the telltale signs and are looking for an all-original example. That said, original, unmolested examples of this fine diver can be found with some patience and perseverance. Trust me, it’s worth the effort to acquire one!

Author Christoph McNeill
Christoph (Instagram’s @vintagediver) is a long time collector and lover of all things vintage, starting with comic books when he was a kid (he still collects them). His passion for watches began in 1997 when he was gifted a family heirloom vintage Omega Genève by his step-father. That started him on the watch collecting path—buying and selling vintage watches of all sorts, with a special appreciation for vintage dive watches and Seiko.
vintagediver
Categories:
ReviewVintage
Tags:
6105seiko