It’s impressive to think just how many different niches watches have evolved to fill. Divers, world timers, perpetual calendars, simple dress watches and everything in between are out there in abundance, providing utility and choice for all tastes. The watch we have here today, however, probably wins the award for strangest niche.

While maybe a touch large at 42mm, the case of the Fireman Storm Chaser Pro is well-proportioned and classically handsome, with a broad-shouldered 21mm lug width. The case side is defined by a flowing, brilliantly polished bevel that tapers from the lug ends to the case center, and the lugs themselves flare out slightly as they meet the main case. This gives them an attached appearance, and lends some ruggedness to the overall look.

At three o’clock, the mid-sized signed crown is flanked by an attractive pair of color-coded pushers, enamel orange for the chronograph’s stop/start and black for reset. The top side is dominated by a steeply angled bezel featuring an unorthodox telemeter scale. Not as straightforward as a tachymeter, the telemeter does help the Storm Chaser Pro’s tornado-hunter cred–one of the few functions that can be performed with a telemeter scale is determining the distance of lightning strikes. What it may lack in practical application, however, the telemeter makes up for in balance, and the even spacing of the telemeter scale adds some harmony to the whole package.

It’s on the back side, though, where the Storm Chaser Pro’s case really shines. The display back gives a look into the richly decorated Caliber RR1402 (more on the movement below), with its brilliantly executed perlage. The gold signature on the rotor is sharply done, and adds another layer of dressing to the overall design. and execution.

The dial of the Fireman Storm Chaser Pro comes in three variants: gloss black, gloss white, and the one we had in for review, a gorgeous metallic slate gray with a prominent vertical grain. This material plays brilliantly with the light, going from a rich charcoal to almost silver depending on the angle. The main sub-dials at 12 and six cut through this layer, revealing a black finish featuring concentric circles.

A running seconds at nine helps to balance out the dial layout, and its cross hair design with a partial seconds track is subdued but visually interesting in that it gives the dial the appearance of being a two register chronograph. Across from the running seconds is a day/date complication flanked by the Ball logo and “Automatic 100m.” The applied rectangles at each hour, in addition to being handsomely made, introduce Ball’s signature tritium tube lume system, also present in the skeletonized baton hands. The tritium lume needs no recharging, it doesn’t fade with time, and while it might not be as bright as, say, Seiko’s lume, it does emit a steady green glow through the night (with orange lume accents at 12, three, six, and nine.) This theme of orange accents is continued through the chronograph seconds hand, with a bright orange tip and Ball’s “RR” script counterweight. It’s a striking highlight throughout the design, but isn’t enough to come off as overdone or flashy.

At the heart of the Fireman Storm Chaser Pro is the Ball Caliber RR1402, an in-house customized and decorated version of the venerable Valjoux 7750. While it might not be a ground-up original design, it’s a base that’s been used since time immemorial and it has proven itself to be supremely reliable. Beating here at 28,800 bph, it gives the Fireman Storm Chaser Pro great accuracy and a buttery smooth sweep. Beyond the decoration, however, what really makes the RR1402 stand out is its toughness, with a claimed 5,000 G of shock resistance.

Both a stainless bracelet ($3,500) and a calfskin leather strap are available for the Fireman Storm Chaser Pro. Our tester came in on leather, and while the strap is a bit quirky, it is a definite winner with a unique design. There’s a layer of black leather on top of the main gray segment, and several holes are punched in this layer, exposing the grey underneath, to give it the feel of a classic rally strap. The overall effect is one that is sporty, and the orange accent stitching makes for a visually interesting strap that is in harmony to the rest of the watch. However, if it isn’t to your taste, the swap is easy enough. 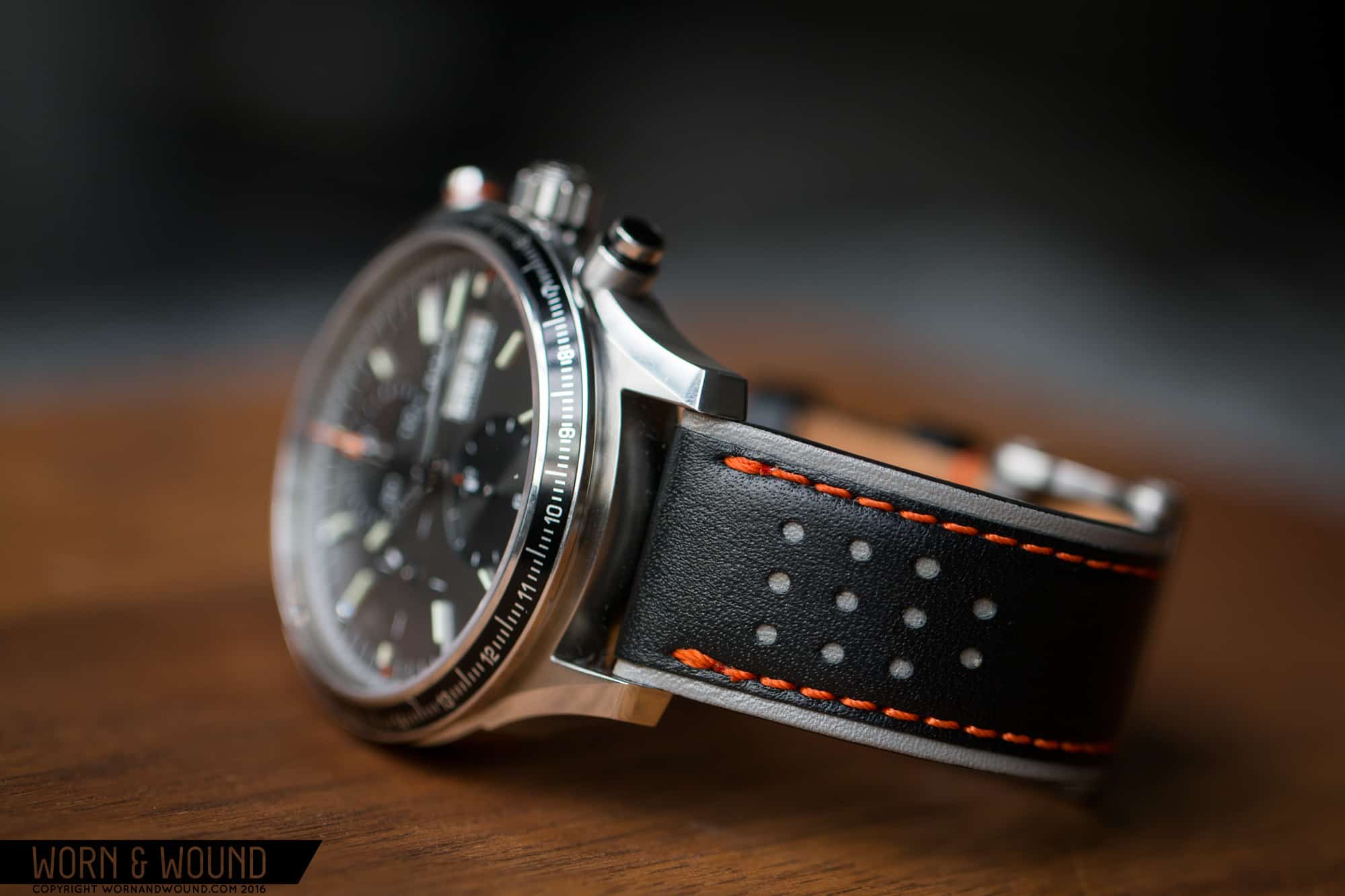 Just as important, the watch is seriously comfortable on the wrist, with thick padding and a soft genuine leather liner. The finish on the buckle is exquisite as well, with simulated screws, and a deep, clear signature etching. In terms of overall wearability, it carries quite a bit of presence–it’s in the same size ballpark as an Omega Speedmaster Pro, but it somehow feels a tad larger. But even with the long straight lugs it doesn’t come off as overwhelming on my smaller 6.75-inch wrist. With the bright orange accents, it might not be suitable for the most formal of situations, but it gives a bit of pop for everything from blazer wear to t-shirts.

The Fireman Storm Chaser Pro works far beyond the pigeonhole that Ball has placed it in. While it’s certainly got the features, reliability, and rock-solid toughness to go out storm hunting, its clean, attractive design and solid value make it a great choice for anyone looking for a quality chronograph. It might ring up at $3,400 retail, but even at that price, it’s a value proposition. In terms of finish, amenities, and overall impression, it stacks up very favorably against substantially more expensive chronographs (looking at you, Tag Carrera) while maintaining a flair all its own. More than once during my time reviewing this watch I thought very seriously about selling off a chunk of my collection to snag one of these, and the more time I spent with it the better that idea sounded. If you haven’t had the chance to check out what Ball can offer, seriously give this one a look.

To learn more about the Fireman Storm Chaser Pro and the rest of the Ball catalogue, visit Ball Watch.