Right around the time that Blake reviewed the Maratac Pilot, County Comm quietly released a second, smaller model. Dubbed the Maratac Mid Sized Pilot this 39mm version is the same in almost every way, it’s just smaller. It has the same Miyota 8245 automatic movement with small seconds, the same domed sapphire crystal, the same dial design and the same cool-little onion crown tucked away at about 4 o’clock. Ultimately, the qualities and aesthetic of the original Maratac Pilot have been successfully translated to the smaller sized body. In fact, since the Mid has a smaller diameter, but the same thickness, the overall stout build had an almost sportier and more aggressive look than the large sized. 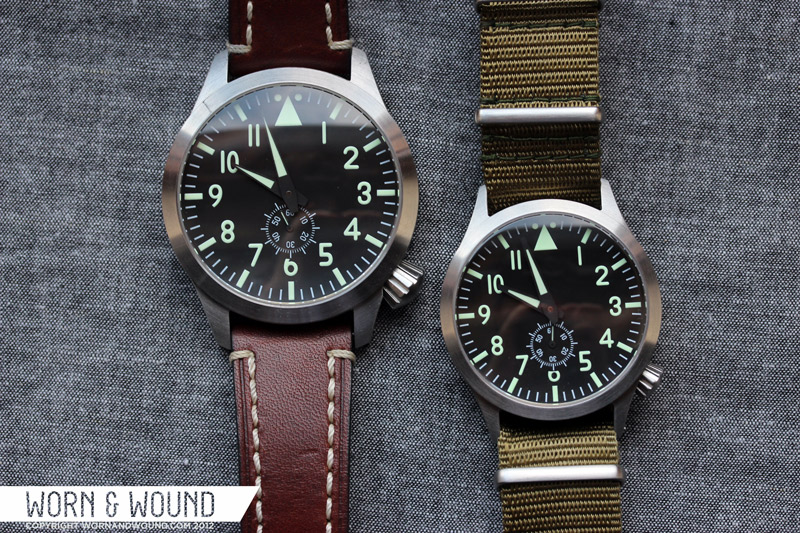 Thankfully, Mike over at County Comm sent us Mid to try out, and I can’t quite even express how excited I was to receive it. I had my eye on the original for sometime, then Blake picked one up for review. And though it tempted me greatly, 46mm watches are just not practical on my smaller wrist. This unfortunately makes many watches in the pilot genre, which often hit the 47mm mark, out of my comfort range. But I love the aesthetic, as I am sure many other watch wearers with smaller wrists do. So, a 39mm pilot, which will certainly fit any smaller wrist, satisfies that yearning perfectly. 39mm is a very interesting size for them to make it, since it is actually a bit smaller than what is typical for men’s sportier watches, which tend to hover in the low 40’s. This actually makes it a very viable unisex watch. Having worn the Maratac Mid Sized Pilot now for a few weeks, I have to say it totally lives up to my expectations, and might even surpass them. Like I said, the 39mm case is actually very stout and with and aggressive profile. It sits on the high on the wrist, really feeling like some sort of tool that has been strapped to you. Yet, the size and weight are very comfortable, and the positioning of the crown makes it never interfere with your hand. I’ve been mostly wearing it on a green Nato from Maratac, naturally, which suits the pilot aesthetic perfectly, but I also tried it on a high quality black leather strap from Bas+Lokes, which gave it a more refined look. One slightly funny detail is that pins of the shoulder-less spring bars actually stick through the lugs. This is because in scaling every thing, the tips of the lugs became quite thin. At first I thought, what a funny thing to overlook, but I have actually grown to like it as an odd detail. Since everything about the case is so simple and utilitarian, this little reveal actually fits right in. So, for a full write-up I’ll defer to Blake’s review, as most of the significant details are the same. That being said, I’ll just go on record as saying this watch is awesome. Is it perfect? No, but for under $200 it’s damn good and really satisfies the itch for a mechanical pilot watch. More importantly, it brings this aesthetic to a smaller and easier to wear (for the small-wristed) size. It already has a place in my regular rotation as both a pilot and a tool watch. Get one here, you’ll be glad you did. Author Zach Weiss
Zach is the Co-Founder and Executive Editor of Worn & Wound. Before diving headfirst into the world of watches, he spent his days as a product and graphic designer. Zach views watches as the perfect synergy of 2D and 3D design: the place where form, function, fashion and mechanical wonderment come together.
wornandwound zsw
Categories:
FeaturedReviewWatches Under $1000
Tags:
Maratacpilot watch

By Zach Weiss 28.12.2011
For those of you that have been following worn&wound for …
Review / Featured