There was a time not too long when the Seiko Monster was considered something of a left-field choice in the large range of Seiko dive watches. It certainly wasn’t as commonly recommended as the vaunted SKX007 and the many Turtles the brand has released in the last few years. While the specs and construction made it a serious tool watch, the design was a love-it or hate-it hunk of steel that barely resembled a watch, let alone other divers in the Seiko catalog. Like Brutalist architecture, the design of the original Monster was modular, bare, and characterized by an interest in the materials it was made from. You could call it the Boston City Hall of dive watches. When I first came across the Monster, it was an orange oddity with large triangular hour markers that recalled shark’s teeth, and was truly a monster in size, with dimensions exaggerated visually as a result of the distinctive shrouded bezel assembly. Today’s Monster is a different beast altogether. While it’s still a big, chunky dive watch, it’s not nearly as rough around the edges as the original Monsters, which remain popular and have become quite collectible in many variants. The current Monster line up is a little slimmer and more refined, and doesn’t have the same in-your-face styling as the original.

This iteration of the Monster is more grown up, not quite as weird, and definitely worthy of being in the same discussion as your Turtles, Samurais, and Tunas. Like all of us, the Monster has gotten a little more mature and sensible with age. Let’s jump into the review.

The case of the Monster is certainly its most polarizing feature, and your opinion of the watch is likely going to rest on what you think of its shape when you first lay eyes on it. While the SRPD25 seen here isn’t as avant-garde and aggressively different in how it’s designed compared to what we think of as a normal watch, reviewing the newest Monster from all angles reveals that it’s a diver that’s still very much its own thing design wise, even if it’s a bit toned down from what it used to be.

The distinguishing feature of any Monster is the shrouded bezel design. This is a form that Seiko has used frequently in the past, most often with the so-called “Tuna” series of divers, which feature a “shroud” that circles the bezel across much of its circumference, protecting it from being inadvertently jostled out of place. On the Monster, the shroud is far less pronounced than on a Tuna, and is really an extension of the watch’s lugs. Imagine a design where instead of the bezel assembly sitting on top of the case, it seems to instead drop down inside of it, below the tops of the lugs.

This design does a couple of interesting things. First, it offers a moderate amount of protection to the bezel. It forces you to turn it from a grip at 2:00 and 8:00, rather than 12:00 and 6:00. With a significant portion of the bezel covered by the shroud, it requires a bit of intentionality to make an adjustment. This is a good thing if you’re a diver and rely on your watch as a back-up to a dive computer.

Secondly, it helps make a big watch wear significantly slimmer. On a traditional dive watch, case height can be exacerbated to unwearable degrees by a bezel assembly that towers over the midcase. That’s not a problem with the Monster. Looking at the watch in profile, you can see that the bezel barely clears the tops of the lugs. That sunken bezel design shaves millimeters off the all important width measurement without compromising the integrity of the case – it still has heft to it from the shrouds at 12:00 and 6:00. The bezel itself slopes gently inward toward the center of the dial, which further aids in slimming the watch. This is a small detail, but it has a major impact on the shape of the watch and the overall impression it gives. Picture almost any other watch with a substantial bezel, rotating or not, and consider the shape it lends to the topside of the watch, assuming it’s flat. In that case, the watch’s full thickness is effectively represented across its entire diameter. On the SRPD25, the full thickness of the watch is present only at the outermost point. The flat Hardlex crystal plays a key role here as well.

These factors all contribute to making the SRPD25 feel quite a bit more svelte than the Monsters of yore, which were essentially blunt instruments that could be useful in combat against sea creatures found in the depths of the ocean. While the case is large by almost any standard at 42.4 millimeters, it’s only 13.4 millimeters thick. For the sake of comparison, the second generation Monster, which was in production for the longest period of time and represents what many likely picture when they think of this watch, measures 43 x 14mm. 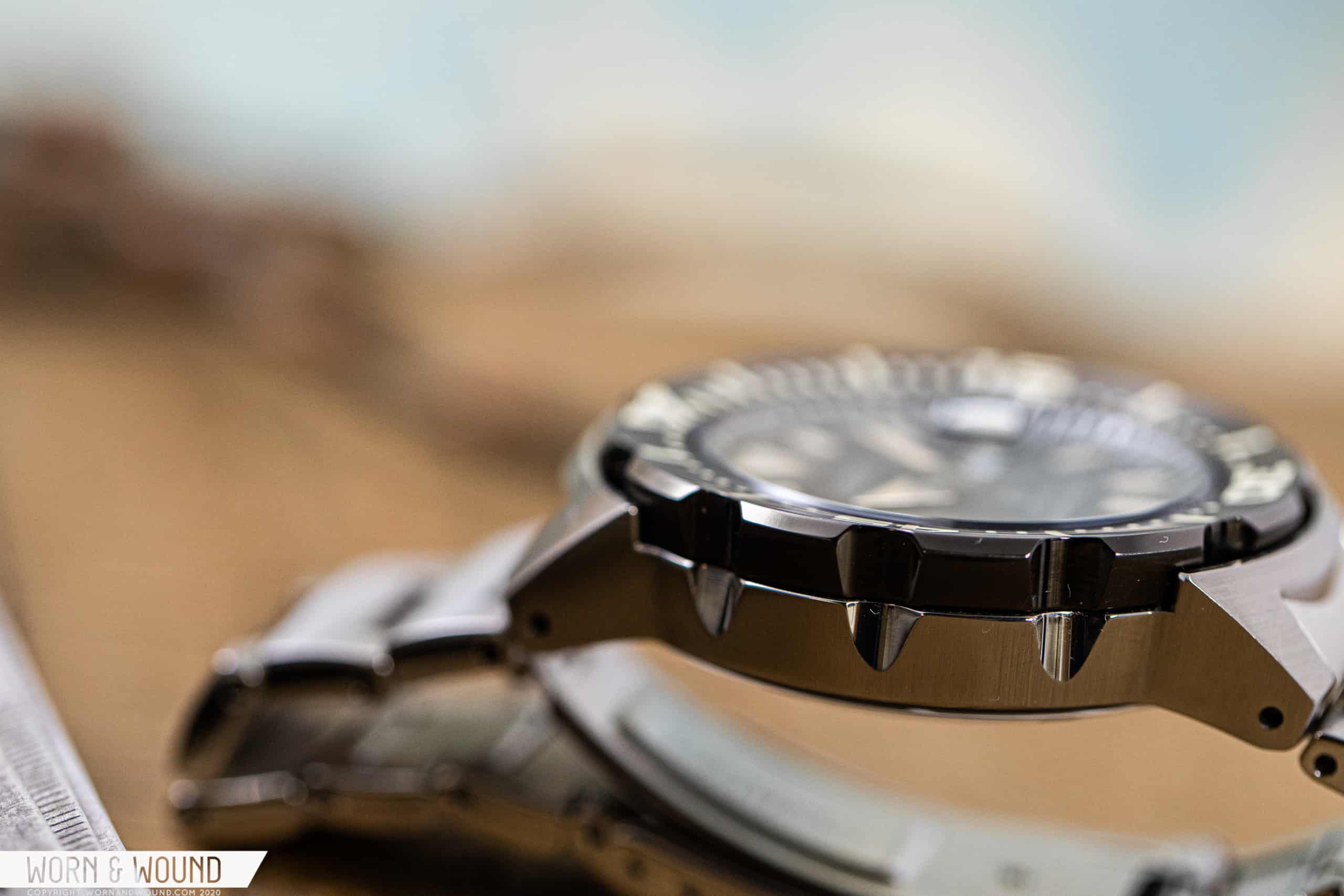 While it would be wrong to say this new version is substantially thinner or smaller by the numbers, that half a millimeter difference in both dimensions does have an impact, and when you combine the new measurements with a narrower and sloping bezel (made from ceramic, not steel), the end result is a case that feels sleek and easy to wear, and not just in comparison to the previous incarnation of the Monster. Consider the Turtle, an actual monster of the sea, measures a full 44mm in diameter, with a case height of 14mm. We can continue to call it the Monster, but we’re definitely at that point in the story that we begin to see that what’s been hiding in the closet isn’t so scary, after all.

The SRPD25 has a deep blue dial with an iridescent, almost metallic finish. It’s not a traditional sunburst dial, but it plays with the light in a similar way. The blue isn’t so dark that it ever really appears black in low light, but it can go from navy to an almost sky blue depending on how and where the light hits it. This new generation Monster is also available with a black dial, but I think the blue is far more visually interesting, and more in line with the somewhat alt-diver feel of what we think of when we think of the Monster. As you’d expect on a Seiko dive watch, Lumibrite is generously applied across the substantial hour markers and the trademark Monster hands. Seiko has gone back to rectangular hour markers with this version of the monster, dispensing with the distinctive but somewhat controversial sharktooth style markers seen in prior years. That’s fine with me – I like the rectangular markers, and think they balance out the design of the rest of the watch nicely.

The day and date display at 3:00 is magnified by a Rolex style cyclops (meaning, the magnifier sits above the crystal, rather than below it). Like date windows themselves, this inclusion of a cyclops lens is something that watch heads simply love to fight over. Personally, I like the idea of a cyclops – anything that helps overall legibility at a glance, particularly on a tool watch, is OK in my book. My bigger concern than the presence of a cyclops is whether it’s executed well. Some old school magnifiers are glued directly to the crystal. I’ve seen vintage watches with replacement cyclops lenses where adhesive residue is visible to the naked eye. Also, some magnifiers just aren’t very strong, and then I wonder what the point was to begin with. While I’m not sure that magnification is truly necessary in the case of the day-date display on the SRPD25, I can’t find fault with the lens itself. It does its job, and it doesn’t feel like an extra part that was simply tacked on at the end of the design process – it makes sense in the larger context of this particular watch.

The SRPD25 is powered by the 4R36 movement, a bulletproof automatic caliber with hacking and handwinding capabilities. This movement has been around since about 2011, and has proven to be reliable over time, but it’s not one of Seiko’s next generation 6R series calibers featuring extended power reserves up to 70 hours. In a tool watch like this, I’m fine with an older, proven movement being used to keep costs down and reliability high. The SRPD25 comes on a stainless steel bracelet that is simple and comfortable. The curved end links fit precisely to the case, creating a kind of pseudo-integrated effect that is currently very much in favor among sports watch enthusiasts. The clasp is of the standard folding variety. It’s stamped, but not as chintzy as some of the cheapest clasps I’ve handled, and it has plenty of micro-adjust points, so dialing in the perfect size is as simple as keeping track of the spring bars that inevitably go flying across the room when you make a quick change.

I’ve been wearing the SRPD25 primarily on a few different rubber straps, and have found the case, which sits closer to the wrist than you might expect for a 200 meter diver, works well with both the standard Seiko dive strap, and a third-party rubber strap with a similarly thin profile. 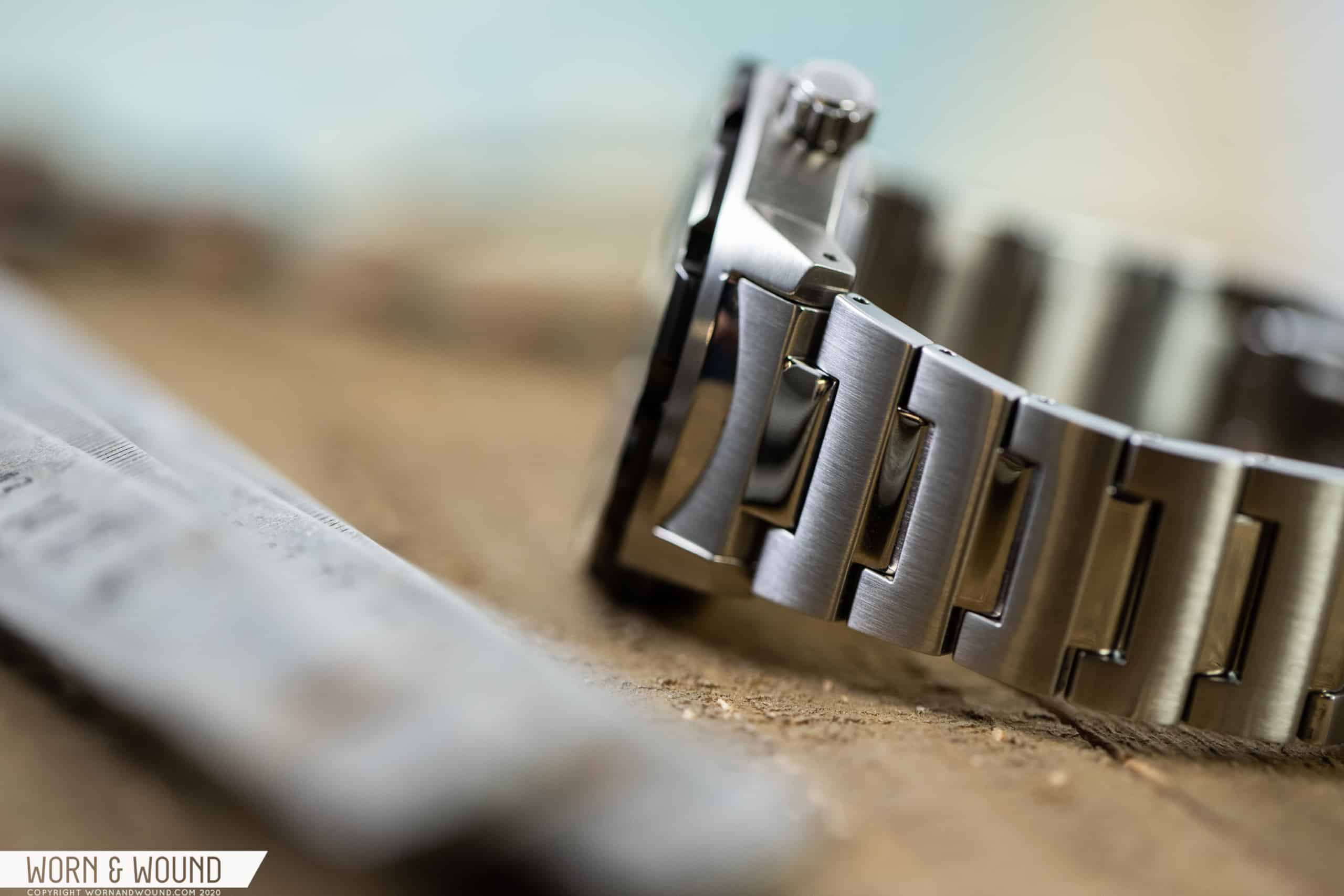 While the watch is big by any normal definition of the term, it’s not unwieldy, and the short, stubby lugs keep the watch wearable for a variety of wrist sizes, assuming you enjoy the aesthetics. This watch doesn’t hide its dimensions: it looks and feels like a 42mm watch, even if it is a markedly different experience from earlier versions of the Monster.

This new Monster is frankly not so scary. What was once an almost avante-garde, troll piece now resembles something that is actually kind of normal.

I have mixed feelings about this. On one hand, I really enjoy wearing the SRPD25. It looks great, fits my wrist nicely, and is genuinely functional. On the other hand, I feel more than a little nostalgic for the adventurous design of the past. The SRPD25 is like a punk rock kid that grew up and has traded in nights in dingy rock clubs for plush seats at the Eagles reunion tour. While it’s not a Deadhead sticker on a Cadillac (this is still, fundamentally, a cool watch that’s aimed at what I believe to be a younger demographic), there’s no denying that something that was once head turning and alarmingly distinctive has transformed into something a bit more conservative.

Seiko, though, still makes alarmingly distinctive watches. They just exist in other lines. Consider the recently re-launched Arnie, for example. Or the Tuna inspired Street Series of solar divers. These watches, in my eyes, have more in common with the original spirit of the Monster than the SRPD25. So maybe it’s just time to retire the nickname? With a new generation of exciting, interesting designs coming up behind it, the Monster doesn’t need to be the alternative choice it once was.

Author Zach Kazan
Zach is a native of New Hampshire, and he has been interested in watches since the age of 13, when he walked into Macy’s and bought a gaudy, quartz, two-tone Citizen chronograph with his hard earned Bar Mitzvah money. It was lost in a move years ago, but he continues to hunt for a similar piece on eBay. Zach loves a wide variety of watches, but leans toward classic designs and proportions that have stood the test of time. He is currently obsessed with Grand Seiko.
Categories:
ReviewWatches Under $1000
Tags:
seiko
Related Reviews
Review / Featured