Recently, at a casual gathering of watch enthusiasts, most of who prefer refined automatics under or around 40 mm, there was an undeniable attraction to two Seiko SBBN015s (48mm cases and quartz powered) that had made their way into a pile of Sinns, Damaskos, Squales and vintage Hamiltons. 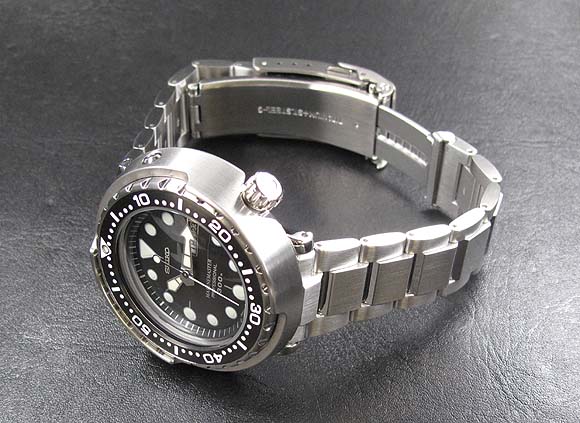 The seemingly garish Seiko shrouded divers has caught the attention of most of the table sharing Neapolitan pizza pies and watch talk. The Seiko “Tuna” nicknamed for its Chicken of the Sea-style circular case is most definitely unique and it’s an eye-catching design that also happens to be derived from some serious dive watch innovation by the Japanese watch manufacturer, whose history in the development of dive watches is on par with the biggest names in the category.

The shroud is a shield for the case that is secured with three screws, giving the suit-of-armor appearance that projects an all-business attitude that fans love. Two cut outs give the wearer access to turn the timing bezel.

I won’t go deep into the history, but the beginnings of the Seiko shrouded diver go back to 1975 with the introduction of the 6159-7010, which is known as the Grandfather Tuna. It’s a magnificent watch that features a titanium case, L-shaped crystal gasket, ceramic-coated titanium shroud, automatic movement and no helium escape valve. Seiko was at the time seeking to create a watch that could hold up well for professional saturation divers and came up with the first Tuna. The modern version is nicknamed the Emperor Tuna, the SBDX011, which retails for around $2,300 and uses an undecorated Grand Seiko movement, the 8L35.

The first quartz Tuna was the 7549-7009, also known as the Golden Tuna for its gold colored accents. Released in 1978, the 600-meter rated watch was Seiko’s first quartz diver meant for professional diving. For the me the Tuna series hits its sweet spot at the 300 meter depth-rated quartz Prospex models, the SBBN015 and the SBBN017, both well under $1,000 with the current exchange rate at the time of this article’s publication. If you’re a worn&wound reader who’s thinking, “Why would I pay over $500 for a quartz watch?” then you probably haven’t held a Tuna in your hands or strapped one on your wrist.

Here are 10 reasons (or excuses) for adding a Tuna to your collection:

Also, Seiko has unveiled new Tuna models (which don’t have the now-classic hands) and the rumor mill is brewing that the classics will be discontinued.

For those who can’t decide between the SBBN015 (black bezel insert) and SBBN017 (stainless steel bezel insert), I don’t think one is better than the other.  It’s a matter or preference.

The SBBN015 (around $900) has an engraved black bezel insert, a very high-quality Oyster style bracelet with a ratcheting clasp and special end links made to fit the case (which retails for $280 on its own). The shroud has a brushed finish and the bezel itself has a different edge than the one on the SBBN017 (around $650). The 017 has a steel insert and a bead blasted shroud and comes with a rubber strap, which I also find to be comfortable. For those on the fence, I’d say people who enjoy their watches on a made-for-the-watch bracelet should go for the SBBN015 and those who have a lot of black bezel divers should go for the SBBN017.

Here are a few notes to those considering a Tuna:

I’ll acknowledge that Seiko offers other shrouded divers, but I would suggest you skip those and simply save for what collectors call “real Tunas.” Seiko sells automatic shrouded divers using its entry-level hacking and hand-winding 4R36 movement. The latest Prospex entries are the SRP655K1 (black) and SRP653K1 (blue), and both retail for just over $600. The Kinetic GMT shrouded divers, including the SUN019 we’ve reviewed at worn&wound, and its brethren are another option if you want a diver with a shroud, but, again, these are not truly part of the Seiko Tuna lineage that started with the Grandfather Tuna.

So what are you waiting for? Tuna fever is spreading. Just accept it.

Author Li Wang
Li's first watch was a $105 Seiko 5 dress watch. That purchase started his obsession, though he has since moved a bit more upmarket. Today, Li is a fanatic for Seiko divers, both vintage and new, with a special appreciation for the Seiko Marinemaster 300m.
Categories:
Guides
Tags:
seikoTuna
Related Posts
Article / Multi-Part Series