We went in-depth with the caliber 8110 in our last installment of Chronography, where we highlighted its technical superiority over its Seiko brethren. Today, we’re tackling one of the most popular models that it can be found in—the octagonal, all stainless steel Challenge Timer “Bullhead.”

First, some background. The first commercially available quartz watch was released in 1969, a development that led to the monumental quartz crisis. The ’70s saw quartz and traditionally manufactured, mechanical timepieces jostling for precious wrist space, with consumers generally preferring the (at the time) technological superiority of quartz watches.

During this era, Citizen was definitely throwing caution to the wind. In 1972, they proudly released the superb 8110, the brand’s impressive automatic chronograph caliber. To give the timing of this development some perspective, three short years later the Valjoux 7750—the world’s most ubiquitous chronograph movement today—was ordered to be destroyed by management as a result of the challenges brought forth by quartz’s encroaching dominance. Citizen was bold with their aesthetic at the time, experimenting with vibrant colors and designs that date the watches to the decade. Photo credit: sweep-hand.org Another example of ’70s design from Citizen with a two-tone case and lime-green dial. Photo credit: sweep-hand.org

But the watch that I’ll be looking at today—the Citizen “Bullhead” Challenge Timer, ref. 67-9356—was not as exotic as the examples shown above. Rather, it was a sober reverse-panda dial configuration, with white sub-dials on an otherwise plain black background in an all stainless steel case (there was also a second variant in an all-stainless steel case that was a proper panda). It was of the very popular “bullhead” or “Mickey Mouse” configuration where the movement is rotated 90-degrees counter-clockwise, resulting in the pushers and crown resting at the top of the case. 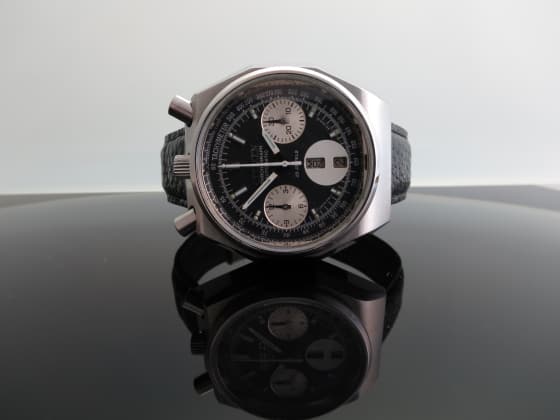 What caught my eye about this particular Citizen bullhead was the smaller size and unusual octagonal case, standing apart from the more typical round cases of Seiko’s counterparts and base metal Citizen bullhead models. But while it was smaller than Seiko’s bullheads, it certainly had its heft. I swapped out the folded-links bracelet for a leather strap to better balance the head-heavy watch, while the leather strap allows me to comfortably wear the watch and make minute adjustments throughout the day.

It is not obvious from my photos because my example has lost much of its original finish over the years, but I have seen the correct finish from other collectors who have better preserved samples. The front of the case alone comes with 21 different surfaces, angled at different degrees and with contrasting polished and brushed finishing. The bezel and the case sides are polished, while the front of the octagonal case is brushed from top to bottom. The flat top of the case where the pushers sit is horizontally brushed. What I would give to have a mint sample in hand to savor the intricate case design!

One minor gripe that I have is that the case has hooded lugs and with them a tight clearance, limiting the number of straps that can be paired with the watch. It’s a minor issue for 90% of watch wearers, but for the 10% who love swapping straps it will be a point of annoyance. And nylon mil-straps? Don’t even dream of it.

Turning to the dial, the Challenger Timer features a dual-register design with the day/date at six and a tachymeter along the outer edge. The sub-dial at three is a 30-minute counter, and the one at nine is a 12-hour counter. The sub-dials feature concentric circles and the tapering needle hands are painted black along the length and left exposed at the pinion. At six is what I would call a faux sub-dial. It contains the day and date, not unlike the way Seiko bullheads feature these two complications.

The hour markers are applied and there is a lower step where the lume dot is found. This is an important feature to note when trying to avoid aftermarket dials, which lack this quality. The designation “P-JAPAN-P8110” signifies the usage of a radioactive material. Unfortunately (or perhaps fortunately), the lume on my Citizen is no longer strong enough for any practical use. The handset is a pair of simple, straight hands with pointed tips, with the middle sections hollowed out to make room for the luminous paint. The chronograph hand is painted white all the way down and narrows to a pointed tip.

And there it is, one of my favorite vintage Japanese chronographs, not from Seiko, but from its close competitor Citizen. Seiko might be a fan favorite of many collectors and readers of w&w, but I would give this round to Citizen with their superb vintage 8110 caliber and the sheer variety of watches that are powered by it, especially the one we looked at today.

Author ZQ Chia
ZQ’s a die-hard Seiko lover, an obsession first sparked by the purchase of a Seiko Orange Monster, the original 7S classic. ZQ has yet to find his way out of the Seiko rabbit hole, dabbling in both vintage and modern, but his love extends to watches of all kinds. This isn’t ZQ’s first foray into the writing about watches, and he’s excited to bring his bank of knowledge to worn&wound. ZQ currently resides in Singapore with his family.
Categories:
Multi-Part Series
Tags:
8110BullheadChronographyCitizen
Related Posts
Article / Multi-Part Series