It’s surprising how often a bit of archaeology in everyday areas of Watchworld yields something interesting.  An example – have a rummage in your watchbox.  Pound to a penny there’ll be something in there running the ostensibly humble Valjoux 7750.  It’s a movement that powers everything from Invictas to Breitlings and forms the basis for some very smart watches indeed.  It’s as ubiquitous in chronos as the ETA2824 is in standard three-hand watches. Who’d think the story of something so apparently workaday involves one of the foremost movement architects of this (and last) century, the dawn of computer technology and full-on corporate disobedience with tools, parts and plans being hidden?

Back in 1973, the quartz barbarians had reversed their Toyota 2000GT up to the gates of the Vallée de Joux and had started decimating the sales of mechs. Seiko had just released the first LCD (a mere four years after the analogue Astron) and James Bond was buckling on a Hamilton Pulsar P2 model 2900, in “Live and Let Die”.  Wiggly springs were getting a quartz kicking. But the Swiss weren’t about to go down without a fight, even if they’d left it a bit late to repel boarders.  Heuer with their Cal.11 and and the Zenith El Primero were starting to create a market for automatic chronographs – but Valjoux had little to compete with them. Seiko were already there with their 6139, but the nearest thing the boys from Les Bioux had was the venerable 7733 – a sound, manual-wind, cam-actuated chronograph.  Switzerland’s watchmakers needed a secret weapon.

As is so often in watchmaking, the past held the answer. The Valjoux 7733, evolved from a much older Venus motor, was to be the foundation for a new quartzbeating movement.  The Valjoux 7750. Most people think of grey-haired old watchmakers toiling over their benches to create new watch movements.  The touch of a file here, a polish there.  In fact, Edmond Capt, the watchmaking hero behind the 7750, was barely 24 when he was tasked with taking the handwound Valjoux 7733 and turning it into a self-winding chronograph. 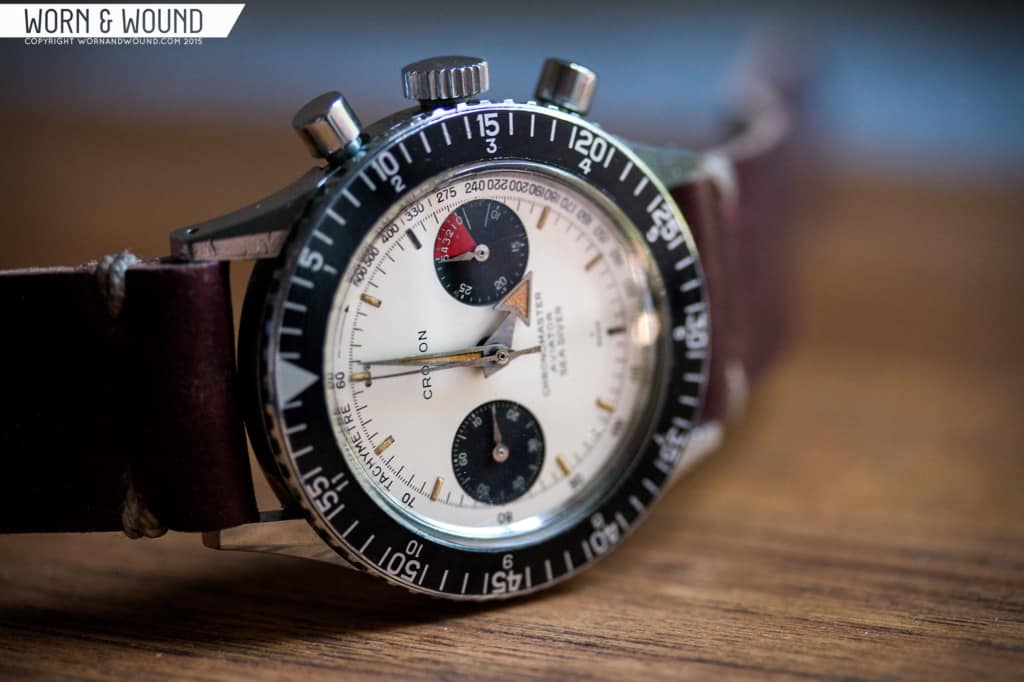 Not only was Capt a young gun, but he was armed with the latest 1971 technology.  The 7750 was one of the first watches to have its workings simulated on a computer.  But a computer in the 1970s was a very different thing from today’s tiny, ultra-sophisticated machines.

In the early ’70s, Bill Gates’ vision of  “a computer on every desk and in every home…” was as incredible as the idea of a plastic quartz watch costing less than £10.  For a start, you’d need a crane to put an early 1970s computer on your desk – they filled entire floors in offices and ran on punchcards or paper tape.

Capt managed to secure time on the Valjoux mainframe in Neuchatel – miles away from his Les Bioux workshop – to simulate the functions of the new movement.  It meant a two hour round trip to run the program, but it slashed the 7750’s development time. And good job it did – there wasn’t a moment to lose.  When the 7750 went on sale in 1973 it proved popular and was soon up to 100,000 movements a year.  But by 1975 the 7750’s sales had flatlined as quartz rocketed.  The quartz invasion meant Capt’s movement was obsolete before it was even a toddler.

Worse, within months the order came down from Valjoux’ senior management not only to stop production but to destroy the machinery, drawings and tooling for the 7750.  But the 7750 was Capt’s firstborn – he wasn’t about to sacrifice it to an arbitrary management decision. So he quietly ignored the order, spirited everything away and hid the lot away from management’s prying eyes.

Bear in mind that this is 1978.  Quartz and anything shiny and electronic was The Thing.  The world was only five years away from the Austin Maestro – a car with a computer-controlled dashboard that actually TALKED to its driver. Admittedly it usually said “malfunction’ as bits of exterior trim fell off, but it did, genuinely, talk. Capt was asked to go over to the Dark Side and take over running the manufacture of quartz movements at ébauche maker, Peseux. Instead, he chose to move to Piguet as their Technical Director.

It says something for Capt’s faith in mechanical watches that he chose the primarily mechanical Piguet over a job in Quartzworld.  That seems a little like going to work for a letterpress printing business because you reckon the internet’s a bit of a fad.  In fact, Capt realised the future belonged as much to quartz as it did to mechanicals and he went on to design quartz movements at Piguet – including the exceptional twin-quartz Caliber FP 1270.

By the mid-late 1980s, after years of obscurity, mech had quietly started its fightback.  Watchies were starting to get bored with things that went ‘beep’ and ate batteries. It was time to get up into the attic and rescue the tooling for the 7750. Capt’s decision to ignore management’s instruction had paid off. The 7750 soon became the movement of choice for a host of makers.  Sound, solid, reliable and accurate, it powered humble watches and expensive timepieces alike.  And, as a testament to Capt, it’s had very little reworking since its design in 1973.  A few plastic parts were redesigned in metal and that was about it.  Today, it’s selling at a rate of 200,000-plus each year.

So what of the movement itself?  The tech specs are simple enough: a balance usually running at 28’800 A/h and 25 jewels. It’s a bit of a beast at 7.9mm thick but that just makes it more robust.  It’s 30mm (31.25 ligne) in diameter.  And, most importantly, it’s automatic with a cam-actuated chronograph.  Properly, it’s a ‘coulisse-lever’ movement.  That means that the chrono is actuated, stopped and reset by a series of levers pushing an oblong cam.  You can see it in action at the ETA website. Visually, it’s simple enough.  You have elapsed seconds running from the cannon pinion in the middle of the dial, a running seconds counter at 9, minutes are at centre top of the dial with a 12 hour counter at 6.  This slightly unusual (at the time) arrangement was intended to avoid the top plate being made weaker.

To start the chrono, hit the top pusher and the bottom pusher to re-set.  All logical enough.

The strange thing is, despite being designed by computer, the 7750 has a proper character.

‘Character’ in something mechanical and apparently inert is hard to define and impossible to deliberately engineer.  But some movements definitely have it.  Others are just a little flat; the watchmaking equivalent of the Mitsubishi Carisma, one of the few cars to be named purely for irony.

From the moment you pick it up, the Valjoux 7750 most certainly has it.  As you move it, it wobbles at you in a friendly sort of way. That’s because the rotor – the small weight that converts motion to power – only winds when it rotates clockwise.  When it moves the other way, it’s freewheeling.  The inertia of the weight means it spins on its central ball bearing race – hence the trademark friendly wobble.  You won’t find that with your Newman Daytona. Since 1973, the 7750 and its variants have found homes in IWCs, Montblancs, Omegas, Sinns, Fortis, Tudors and under dials bearing just about every other name you can think of.  And all because Edmond Capt refused to follow orders.

That’s the lovely thing about watches.  What one may think is a workaday watch will have more happening behind the hands than is obvious.  Look at the dial a little longer and there’s plenty of history written there.

Author Mark McArthur-Christie
Mark developed a passion for watches at a young age. At 9, he was gifted an Omega Time Computer manual from a local watch maker and he finagled Rolex brochures from a local dealer. Today, residing in the Oxfordshire village of Bampton, Mark brings his technical expertise and robust watch knowledge to worn&wound.
markchristie mark_mcarthur_christie
Categories:
Multi-Part Series
Tags:
ChronographyETAvaljoux 7750
Related Posts
Review / Vintage