Behind the back of a mechanical chronograph you’ll find of the most beautiful sights in watchmaking.  A complexity of wheels, cams and levers working together to actuate and drive a chronograph second hand.  Sometimes, they’ll be driving even more finely sliced fraction-of-a-second timekeeping.  And all this, just so you can time your breakfast egg or how long your tedious boss is yapping in a meeting.

You already know the history of the chronograph (what do you mean, you’ve not read Ilya’s excellent article at Chronography 1: A History?); now it’s time to unscrew that back and take a look at the engine and what makes it go. Let’s assume that you’ve delved into a mechanical (rather than quartz) chrono.  Inside, you’ll usually find one of two types of movement; a column wheel movement or one of the two subtypes of cam-actuated varieties. It’s all about how they start, stop and transmit the power from the mainspring to the chrono mechanism.

The received WISdom is that column wheels are finely honed and balanced Bugatti Royale engines whereas cam and levers are Chevy V8s.  The truth is, as ever in Watchworld, more complicated.

Here’s how to spot them

Column wheel (or “roue à colonnes“); look for a small, castellated wheel in the movement, shaped a little like the top of a chess rook.  Sometimes it’s even blued – as in ETA’s A08.231 that you’ll find in some top-end Longines.  Unless you’ve got the back off a Patek Philippe CH 29-535 PS.  In which case you’re very lucky, but you won’t see the wheel; Patek have thoughtfully covered it with a small fractionally eccentric adjuster cap. Cam and lever (or “coulisse“); like the ETA/Valjoux 7750 or Shuttle cam (or “navette“), like the Lemania 5100.  In both cases, look for an eccentric cam and a series of tiny metal pawls, levers and arms.

A cam and lever has – near enough – the same number of parts as a column wheel set-up.  But it costs rather less to produce as the tolerance of the parts doesn’t need to be quite so precise. A shuttle cam is simpler – and thus cheaper – still. 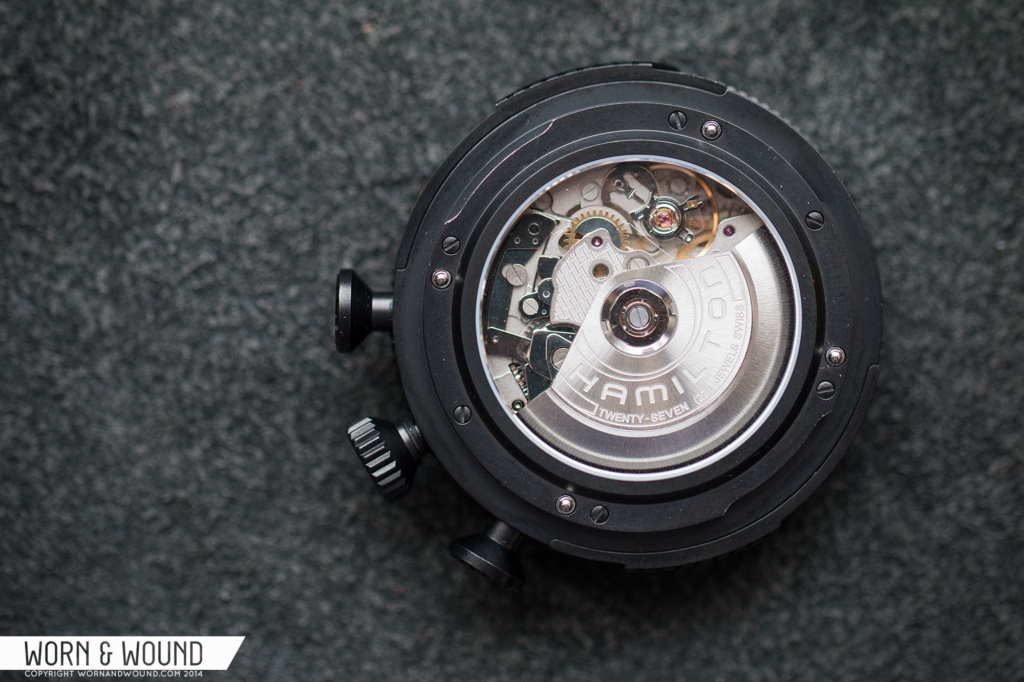 How a column wheel chrono works

When your boss starts droning, you push the ‘start’ button.  This, in turn, moves the column wheel operating lever which moves the wheel one click or turret.  That then moves the clutch rocker away from its detent.  The rocker then engages with the oscillating pinion with the chronograph wheel and the hand starts moving. Click to stop and the column wheel turns the other way, stopping the mechanism. Ah, the very zenith of chronographical excellence.  Lots of parts.  Lots of serious hand-finishing to ensure perfect tolerances.  Expensive, you say?  Well, it can be.  You could nearly buy a house and a 911 to park in the drive for the price of that Patek CH 29-535. But not all column wheel chronos are stratospheric; how about the Seagull ST19?  Yours for around $389. Or you could plump for the original Seiko cal. 6139 from the late 1960s. But it’s true; most column wheels will leave your wallet looking a little wilted.  Think Omega cal.321 from the very first Speedies, Rolex’s cal. 4130 and the completely gorgeous, drool-inducing Zenith El Primero (who said anything about being unbiased?).

How a cam and lever chrono works

Widely thought of as a the column wheel’s poor relation.  A sort of horological embarrassing hick-from-the-sticks cousin.  But are cam and lever movements really second-raters?

Take a look at the exemplar cam and lever, the Omega cal. 861. Because of the way it operates, its sharp, triangular teeth let two wheels mesh together efficiently, imparting power to the chronograph.  But whilst one wheel is always in motion, the one with which it meshes isn’t.  This results in wear.  Not good.  At least, that’s what you’d think.

In fact, even if you’re timing that dreary boss most mornings for a few years, the wear won’t really worry you.  It didn’t worry NASA, after all.  But watchmakers dislike wear, so they developed a new way to actuate the chrono mechanism.  Exhibit A – the almost ubiquitous Valjoux/ETA 7750 and its clever oscillating pinion.  In this movement there’s no vulgar clashing of wheel teeth, just neat, orderly meshing.

Back to the Valjoux 7750.  Push the ‘start’ button.  At the end of a tiny, pivoted metal lever there’s an oscillating pinion.  This moves in response to mesh with the chronograph wheel and round goes the hand.  Not so bad, is it? So why do cams get such a bad name?  There seem to be three reasons: their apparent tendency to have fractionally jumpy second hands when the ‘start’ button gets pushed, slightly harder-to-push pushers and their (relative) cheapness. In other words, there’s a bit of watch snobbery at play.

The bit about the pushers is true though. You’ll get a smoother push with a column wheel movement.

The whole jumping second hand thing is, in fact, nothing to do with the cam actuation mechanism.  It’s simply because most cam-actuated chronos use a horizontal clutch; and horizontal clutches can make a chrono second hand jump a little because of the way their gearwheel teeth mesh.

That means we need to take a look at clutches.  Pour yourself another one and stick with me.

You’ll usually find two sorts of clutches engaging and disengaging the chrono mechanism; horizontal and vertical. They work rather like the clutch on a motorcycle, and allow the watch to remove and impart power from the movement to the hands.

Horizontal clutches are mechanically simple and thinner than vertical clutches.  But remember that business about the two gear wheels with pointy teeth meshing?  With a horizontal clutch, there’s a chance the teeth won’t mesh neatly but will briefly clash. That’ll make the second hand turn very, very slightly out of time.  It’ll only be a fraction of a second, but enough to knock absolutely accurate timing out.  If you’re not measuring your boss but a 100m race, that’s a problem. 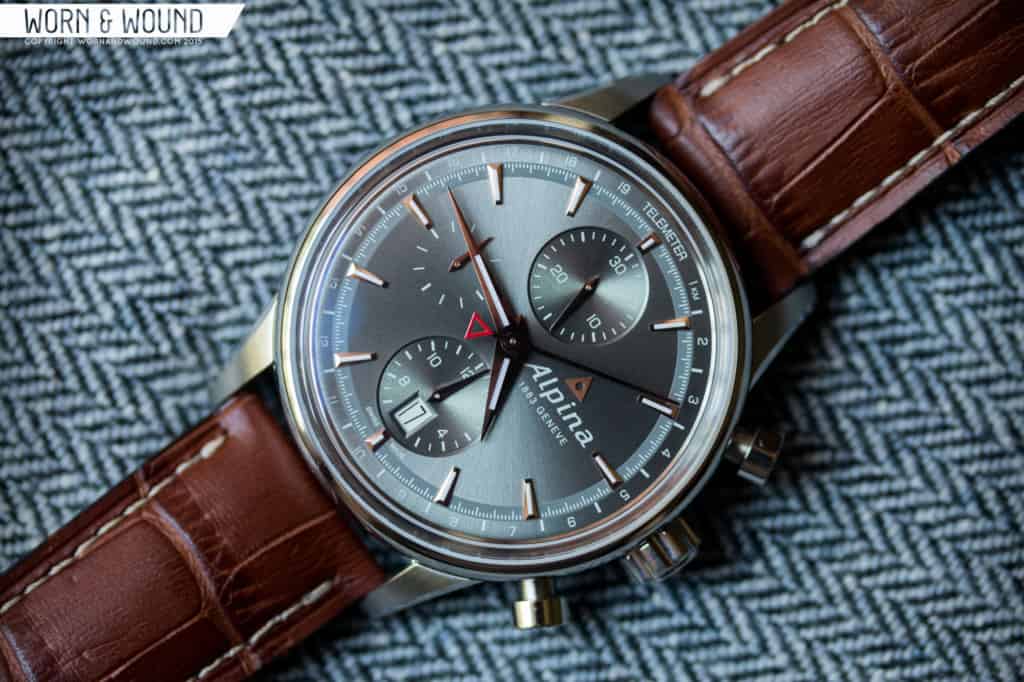 It’s a problem that a vertical clutch solves.  That’s because it allows the gear train to be constantly meshed.  No vulgar gears clashing and wearing here, thank you very much.

A vertical clutch is quite a lot smaller than a drawing pin, but a little similar in shape with the gearwheel and clutch at the top.  Through its centre is a pinion, and the whole lot is held together with a retaining arm.  Push the ‘start’ button and you move the arm, the clutch opens and the chrono wheel is eased into position and starts turning the chrono mechanism.

And because you’ll usually find a (more expensive to make) vertical clutch on a watch with a column wheel movement, that’s one of the reasons people think they’re better.

What should you buy?

As ever in Watchworld, you can very easily head to your local boutique, waving your Centurion Amex and melt its edges a little on your new column wheel ticker.  And a lovely watch you’d have too.  How about a Girard-Perregaux 1966 Column-wheel chronograph with its cal. GP 03800?  Around £23,500 to you, sir.  But if you’re feeling sniffy about its horizontal clutch mechanism or lost Aunt Mildred leaves you her fortune, a Lange & Söhne Datograph ref. 405.035 is yours at $87,500.

These are the premier cru end of watchmaking, but what about the vielle vignes second growths?  There are fine pickings there too.  Go hunting vintage and you’ll get a cal. 6139 Seiko – but be a little careful.  Parts are getting tough to find and if the second hand refuses to reset accurately, you may have a watch that only a few watchmakers can repair.

In the Beaujolais Nouveau rack you’ll find the Seagull from earlier and if you like your wristwear butch (think Bulgarian Mavrud) there’s the Vostok Mriya Automatic Chronograph with its NE88 movement. $1,900.

For the cam fans, there’s choice at almost every level. Anything with a Valjoux 7750 is on the list, as are many later Omega Speedmasters, including the space watches.  You’ve got a pretty good selection of the classic Heuers too – anything with the elegant, swoopy-cammed cal. 11.

The brute of the list is the wonderful directly-driven Lemania 5100.  Ugly it may be, but it’s a superb piece of functional design that makes it one of the few mechanical chronos to be approved for armed forces use.  Don’t let the nylon movement parts put you off – they make a hell of a lot of sense in a watch that’ll keep running accurately up to 7g.  And the 5100 will survive a seriously long time without a service and keep on ticking.

That’s the sort of question that will keep a dinner table of watchie pals amused for a whole evening (and everyone else bored senseless).  The column wheel advocates will cite haute horlogerie, smoothness of operation, elegance and history.  The cam and lever team will thump the table about ease of maintenance, reliability and affordability.  But it’s the fact they both exist – as does the debate – that matters. After all, if they didn’t, we’d all be wearing F91-W Casios.  They have a splendid chronograph. It even has the digital equivalent of a rattrapante.  Rather less complex than the real thing, but all for less than a tenner.

By Zach Weiss 09.06.2011
I have been following Uniformwares’ products since they first released …