It’s no surprise that Casio is pushing new technological innovations at this year’s Baselworld. With smartphones gaining market share, the Japanese makers of the rugged and collectable G-Shock series are touting global positioning satellite and Bluetooth capabilities in their new line. Most people associate Gs with digital watches and Casio is focusing on analog offerings at Basel 2014. The effect is a push to pack as many features as possible to more people who are considering “smart” tech on their wrists, but prefer rotating hands on a dial.

For G-Shock lovers, Casio has unveiled a new Gulfman model. Casio describes it as “equipped with Triple Sensors for measuring direction, atmospheric pressure/altitude, and temperature, the Gulfmaster GWN-1000 is an ocean concept model inspired by the image of a strong man against rough seas.” 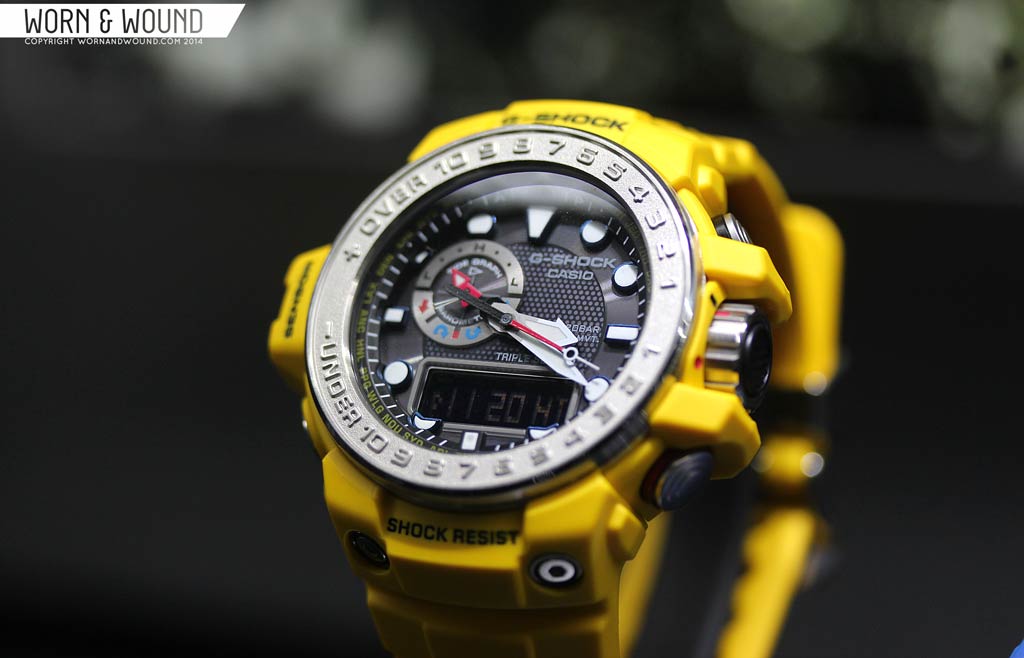 Anyone who has ever tried one of G-Shock’s Master of G series (which encompasses the Gulfman series) knows that they are getting the wristwatch equivalent of a huge chunk of resin that can help you thrive in harsh outdoor conditions. In spite of its complex dial configuration, the GWN-1000 is easy to read. Using a blue bezel and matching inner tide graph and barometer to make a visual distinction from the black dial, this Gulfman has a high-end look that compliments its tremendous functionality.

In spite of its in-your-face styling, Casio designers have employed restraint with classic circular dial markings that offset flashier elements such as the carbon-fiber inner dial coupled with a digital display. The digital display shows current atmospheric pressure values, while the second hand points to a number engraved on the bezel, while the angle of the hand indicates the magnitude of the pressure change. That’s pretty cool. 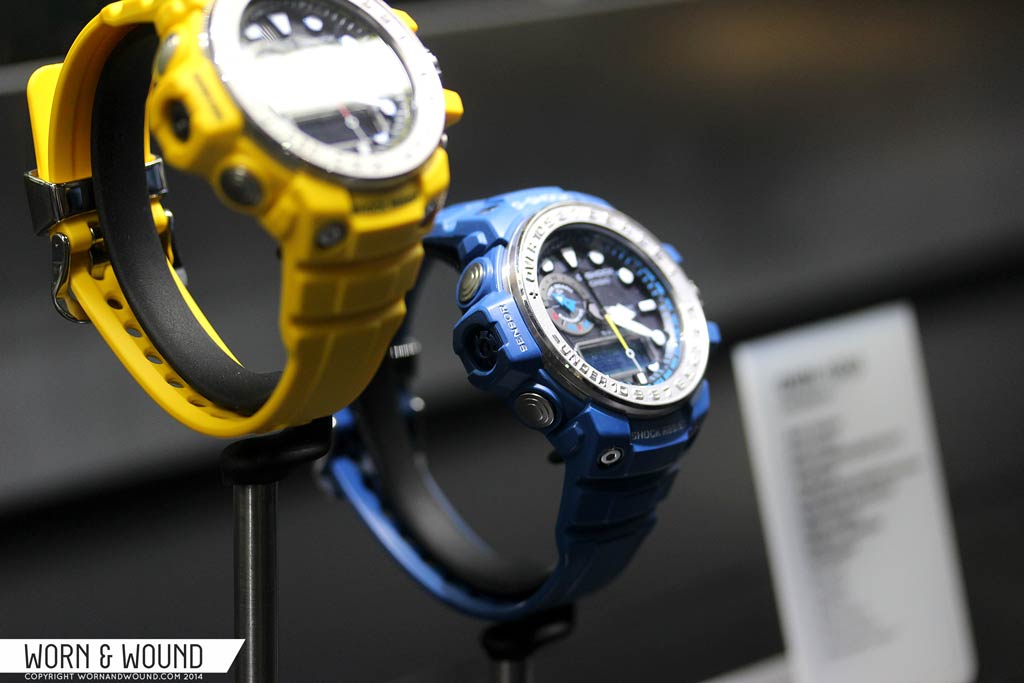 While some Gulfman users will inevitably be drawn to its survivalist look, the real draw of this model is that if might even have saved Mark Wahlberg from “The Perfect Storm.” Over time, G-Shock designers have continually improved on the user experience and the newest Gulfman also uses an intuitive interface so owners can jump from feature to feature easily under pressure situations. The crown pulled to different levels engages world time and sensor functions while a single button calls up sensor measurements.

So why not own a watch that can do it all and survive abuse? Jeep owners in the city smile when they can tame a slick pothole ridden back alley to escape cross-town traffic. It’s pretty cool that even top-of-the-line G-Shocks are still very affordable on the scale of things. For watch collectors, the cliché of having a “fun” watch is fulfilled with models like the newest Gulfman. Even if the ani-digi thing isn’t for you, you have to admire Casio for finding as many ways to build functionality is into a device as small as a wristwatch. It will retail for $500 in August. One could argue the Casio has long been in the smartwatch game before Samsung and Pebble, but they just weren’t called smartwatches back then. So it makes sense for Casio to tackle prominent features of the mobile computing world. More features on-the-go is where our world is moving towards, for better or worse. This year Casio showed its G-Shock GPW1000, which receives GPS and radio wave signals, and Edifice EQB-500, which links with Smartphones using Bluetooth® V4.0. Both watches are attempts to bridge the gap between digital smartwatch offerings and more conventional three-hand designs. So if you don’t want to look like a tech geek but still get data from your phone on your wrist, the new Edifice might be a fit for you.

The GPW1000 is equipped with a GPS system that aims for low-power consumption. The GPS is made by Sony, and the two tech leaders are collaborating to bring smart tech to more standard watch esthetics. We are at a crossroads with tech innovation and watches, and fortunately companies like Casio are pushing what a watch can do to make our daily lives more convenient. These early attempts are hit-or-miss looks wise, but are a sure sign of greater things to come.

Author Li Wang
Li's first watch was a $105 Seiko 5 dress watch. That purchase started his obsession, though he has since moved a bit more upmarket. Today, Li is a fanatic for Seiko divers, both vintage and new, with a special appreciation for the Seiko Marinemaster 300m.
Categories:
News & ReleasesWatches Under $1000
Tags:
BaselWorld 2014CasioG-ShockGulfman
Related Posts
Article / News & Releases