Hitting the auction block this weekend is Steve McQueen’s 1967 Ferrari 275 GTB/4. With estimates ranging from $8-12 million, the car is on track to break sales records and demonstrates that the King of Cool’s legacy is still very much alive. More than thirty years after his death, everything the man touched remains Cool with a capital C. That’s certainly the case with watches, where the models that McQueen wore command a premium in the market. For most buyers, that means a McQueen watch–a blue-dial Heuer Monaco 1133B, a Rolex Submariner 5512, or a Hanhart 417–is in grail territory. However, there is a far less well known and far more attainable McQueen watch, and that’s what we’re looking at today: the Benrus Series #3061 black dial. It’s what we like to call the Bullitt Benrus. When McQueen took delivery of his Ferrari 275 in 1967, he was in the middle of filming what would become arguably his most famous film: Bullitt. The movie follows San Francisco cop Frank Bullitt (McQueen) as he navigates his way through a tricky situation involving politicians, mob informants, and the mob itself (and, most famously, navigates his dark green Ford Mustang GT fastback quickly and screeching through the San Francisco streets in one of the greatest movie car chases ever made). And on his wrist is this little civilian mil-watch. Since the mid ’60s, Benrus had been supplying the U.S. military with reliable timepieces under two specifications, Mil-W-3818B and GG-W-113. Both watches had one-piece parkerized cases, 17-jewel hand-wound movements, and unsigned military-style dials.  Although the late ’60s were a time when military fashion was not as influential on commercial fashion as it’s been before or since, Benrus recognized the quality of the simple military designs they were producing for the government and decided to make civilian a civilian version of the watch available for the commercial market. The Series #3061 is Benrus’ civilian version of their iconic military watch, and it features one big similarity to and three noticeable differences from its issued brothers.  The big similarity is found under the hood: the Benrus DR 2F2 movement, basically a Benrus-signed ETA 2372.  The same movement is found in Benrus’ military watches, and it’s a great little 17-jewel, hand-wound, hacking movement.  The three noticeable differences between the #3061 and the mil versions are what makes us able to identify it on McQueen’s wrist in Bullitt. First, the case is polished and shiny, in contrast to the matte parkerized finish of the mil-watches (it’s also a couple millimeters shallower in the back).  Second, it’s signed ‘BENRUS’ on the top half of the dial, as opposed to the unsigned dials of the GG-W-113 and Mil-W-3818B. And third, the second hand features an arrow tip painted red, while the mil-watches have luminous paint down the length of the second hand. Although we never get a great, close-up view of McQueen’s watch in the movie, it’s clear to see that it has a polished case, signed military-style dial, and red-tipped second hand. Based on those clues, it’s easy to believe that this little civilian Benrus is the Bullitt watch.

Though not as common as its military brothers, the Bullitt Benrus is fairly easily found in good condition. Benrus made at least one other dial version of the #3061 (a silver dial with applied numerals and markers and dauphine hands), as well as another military-dialed civilian watch (the Series #3065, which featured a parkerized case), so pay attention to what you’re looking for when you search. Good-quality examples usually sell for prices comparable to the Benrus milwatches, in the $100-500 range. 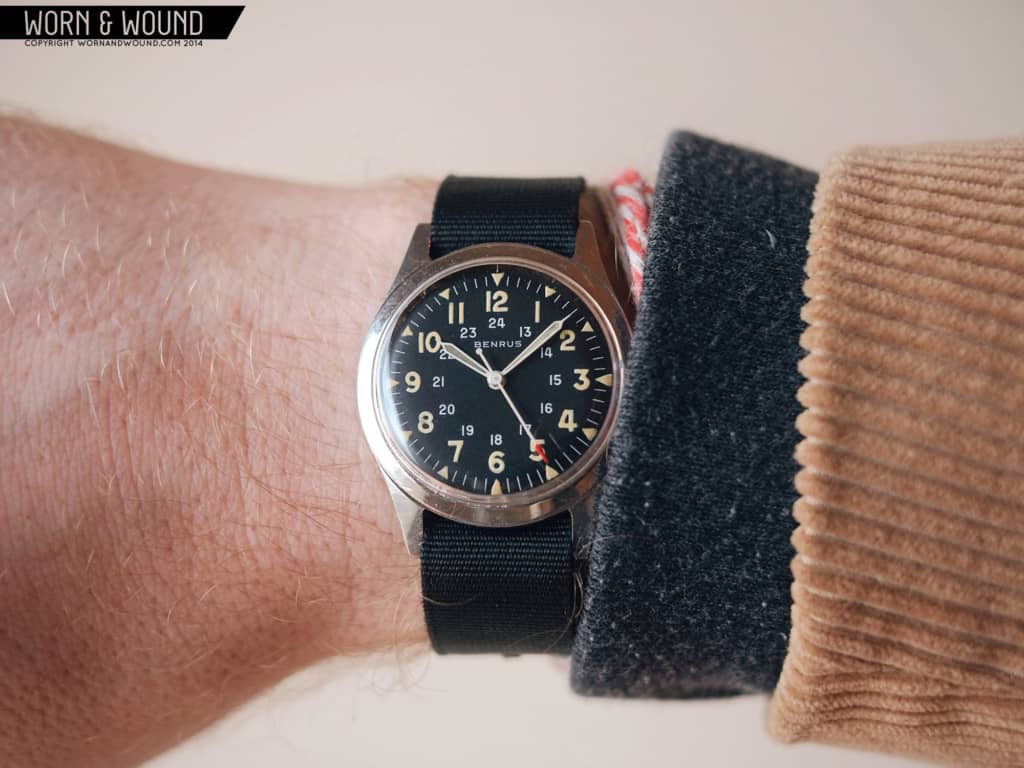 Steve McQueen remains the King of Cool, and the watches he wore live on as some of the best examples of his style and collectable vintage timepieces. If you’re lucky enough to be bidding on his Ferrari this weekend, then you’re also lucky enough to afford a vintage Monaco or 5512. For the rest of us, there’s this Bullitt Benrus and McQueen’s work on the big screen to keep us happy and entertained.

Author Brandon Cripps
Brandon was raised in a military family, the son of an Army pilot and engineer. An early fascination with all things mechanical developed into a love of watches that remains today. Brandon holds a pair of degrees in experimental psychology and works as a human factors test engineer for Army aviation systems.
brandoncripps
Categories:
Multi-Part SeriesReviewVintage
Tags:
BenrusBullittMil-SpecSteve McQueen