If you have any interest in military watches, then the name Cabot Watch Company (otherwise known as CWC) will probably be familiar to you. CWC was founded in 1972 by Ray Mellor—who for some time worked for Hamilton Watch Company—and the brand started out by taking on contracts with the UK Ministry of Defence to supply watches to the British Armed Forces.  The Rolex Submariner Mil-Sub had been the watch issued to Royal Navy divers until the early 1980s when it was replaced by the CWC Auto Diver first for a short run, and then the quartz version of the same watch from 1982/83.

Initially, these watches were not available or intended for public sale, but UK Army Surplus store Silvermans began purchasing watches from CWC to sell directly to the public. When its former owner decided to retire, CWC was sold to Silvermans, which still produces watches under the CWC name, selling them directly to the public and to the British Armed Forces today. CWC is planning to release a reissue of the 1980 Royal Navy automatic diver later this year to the same specifications as the original, but this time updated with a sapphire crystal and vintage lume markings. 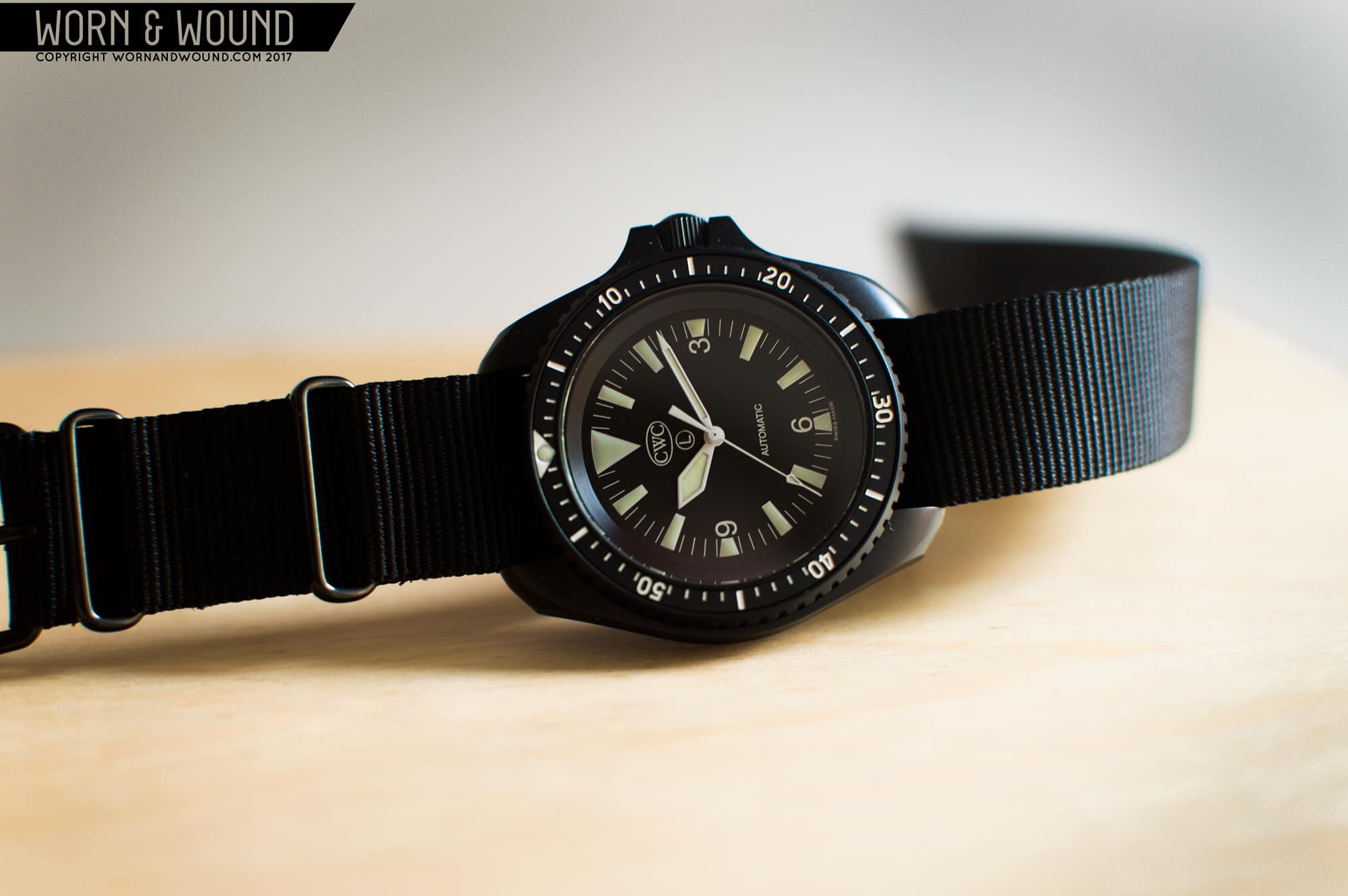 The CWC Royal Navy Black Diver Automatic Mk. 2 reviewed here (and currently available for £949, or about $1,220) is offered in several variants.  The case can either be finished in matte stainless steel or with a black PVD coating, there is an option for either an automatic or a quartz movement, and date or no-date variants are also available. CWC also produces a day/date “SBS” version based on the requirements of the Special Boat Service.

The case on this particular version has a matte PVD finish, which does disguise some of the case lines.  The most obvious things to note from just the case silhouette are that the lug-to-lug distance is fairly short at 47mm and that the crown guards are fairly long—extending almost the whole length of the crown itself.  This gives the watch a fairly beefy appearance despite not actually being overly large. Looking at the watch face on, the lugs are fairly wide with a shallow curve from the top of the case to the bottom of the case, with the curve only becoming more pronounced near the ends of the lugs.  Wide-shouldered lugs often help a watch look a little larger on the wrist, and I expect that’s the case more so with this PVD version than the regular stainless steel one.  From the side, the case is fairly flat without too much of a downward curve of the lugs.  The 120-click unidirectional bezel is fairly thin and offers excellent grip with very little play.

This version of the CWC auto diver comes with a flat sapphire crystal utilizing a decent internal anti-reflective coating.  The flat crystal helps the watch achieve a fairly slim 12mm thickness, which is not bad at all for a 300m automatic diver.  The crown and case back are both screw down, and the heavily brushed case back features the required military issue markings. The dial—as one would expect from a watch designed for military use—is simple, clean, and legible.  The large triangle lume plot at 12 o’clock is accompanied by decently-sized lume plots for the other hour markers with small Arabic numerals at three, six, and nine. Non-lumed minute markers are positioned between them.  On the date and day-date versions, the three o’clock numeral and accompanying lumed marker make way for the aperture. The only other markings on the matte black dial are the CWC logo and “Automatic” wording in the upper and lower halves of the dial, respectively, and an encircled L to indicate the dial features Luminova paint.  Earlier versions used T to indicate the presence of tritium paint.  The fat sword hour hand is easily distinguishable from the pencil minute hand, and both are heavily lumed along with the arrow tip on the second hand. One noticeable feature is that the plain black chapter ring is fairly shallow and therefore quite wide.  First, this makes the dial appear slightly smaller.  Depending on personal preference this could either be seen as a good thing or a bad thing.  Second, and surely more deliberate, is that it makes the dial appear more legible at acute angles.

Inside the watch beats an ETA 2824-2—a proven movement well known for its robustness and reliability.  It may be nothing out of the ordinary, but those characteristics are also shared by the watch itself.  Of course, the choice of a quartz movement inside would be more authentic today, but the automatic version is sure to appeal more to watch enthusiasts.

With a 20mm lug width, strap choices would normally be plentiful.  In addition, black dialed (and cased) watches normally become “strap monsters”—looking good on just about anything you choose to pair it with.  However, in this case, the fixed bars—as opposed to the more common spring bars or screw bars—really limit the strap options.  The benefit here is a purely practical one, eliminating the potential for spring bar failure, but you will only be able to use single piece straps that pass under the case back.

The supplied black nato strap with matching hardware is of reasonable quality, and is probably the best choice for an all matte black watch such as this, though I found it also looks great on an olive green nato strap.

This wouldn’t be regarded as a huge dive watch by any means—in fact, the dimensions probably verge on the smaller side of average—but I tend to find that divers with these dimensions tend to wear pretty well on most wrists when worn on a nato or zulu strap.  The short lug-to-lug distance works well for smaller wrists, but the presence of the accompanying strap and hardware means it won’t look or feel out of place on a larger wrist.  The added height that comes from the need to have a strap sitting between the wrist and the case back doesn’t create too much of a problem due to the slimness of the watch.

The CWC Royal Navy Black Diver Automatic Mk. 2 is a solidly made diver.  More than most watches, its design was born from function more than aesthetics, but it covers both bases more than adequately.  It’s no surprise then that Silvermans chose to offer sales of CWC watches to the public, adding a few different variations to cater for preferences on date display, case finishing and movement type.  The limited strap choices are a potential downside, but it is a tough, practical, and good looking watch with real pedigree. CWC

Author Brad Homes
Brad stumbled into the watch world in 2011 and has been falling down the rabbit hole ever since. Based in London, Brad's interests lie in anything that ticks, sweeps or hums and is slightly off the beaten track.
bradwatch
Categories:
Review
Tags:
CWCRoyal Navy Dlack Diver Automatic
Related Reviews
Review / Review