The history of dive watches is a labyrinth of design and engineering from brands both large and small. Tracing the modern diver back to the mid 20th century you have big players, such as Blancpain and Rolex, creating what are now icons alongside of smaller brands that were  forgotten and others that today have achieved cult status. Some of these brands made icons in their own right, such as Squale and Zodiac, or made cases for other brands that defined a style, like EPSA with their Super-Compressors. Today we’re going to take a look at a brand that is far more obscure, though they were on the forefront of dive watch innovation in the mid-twentieth century and have persisted in the background until today; Jenny. Founded in 1953 by Paul Gustav Jenny, Jenny & Cie S.A. was a brand that was focused on diving technology. Their line of watches, known as the Jenny Caribbeans, quickly raised the bar for water resistance, claiming to have created the first 1000m diver, the Jenny Caribbean 1000. They also created a patented bezel insert, as well as patented case construction. As far as great affordable vintage watches go, Jenny Caribbeans are up there, as they trade for surprising reasonable amounts. Apart from their own line, they also designed and manufactured watches for many leading brands of the day. Notable brands included Aquadive, Fortis and Ollechs & Wajs, the last of which also used the Caribbean name. While the Jenny watches eventually stopped production, the Jenny family continued on in the watch industry and currently own and operate another famous cult dive brand, one who they manufactured cases for and had a hand in the design of; DOXA.

In 2012/2013, for the 50th anniversary of the founding of Jenny Watches, they released a limited re-edition watch based on their first model, the Jenny 700. With 5 styles and a total run of 500 units, the new Jenny Caribbean 300 is a revival of a cult watch that is meant to appeal to dive watch enthusiasts. For the 300, they modernized the design with modern materials and dimensions, and powered it with an ETA 2824-2, but stayed true to the original aesthetic. They also incorporated their patented bezel, which is truly unlike any other. The 300 comes in at $1,290, or $990 if you happen to have purchased a DOXA Sub between 2002 and 2012. The design of the Jenny Caribbean 300 case stays faithful to the original geometry, but gets a bit larger for a more modern fit. Coming in at 42 (44 at the bezel) x 51 x 12.3mm, it’s moderately sized for a modern diver, though considering original Jenny 700’s were around 39.5, large for their day, I think they could have gotten away with the original specs. Regardless, proportionately, the case works, putting an emphasis on the sharp, broad lugs and the wide bezel. The actual case geometry is relatively simple, with slab sides, minimal curvature, even light brushing and no beveling. Despite the lack of detailing, it has a solid, purposeful look that has been machined excellently. 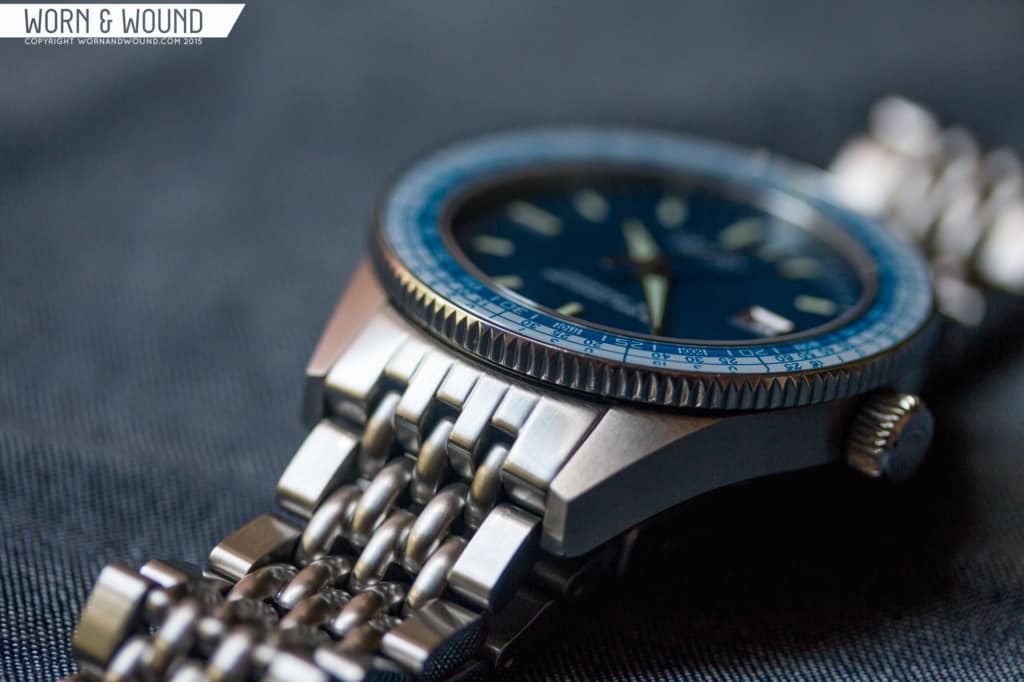 The real eye-catcher is the bezel, which is available in a variety of colors. It’s quite wide 5mm inner edge to out, and features an intensely technical insert under a sapphire barrier. It stands about 3.5mm tall, and has a coined edge for grip. The 120-click uni-directional mechanism has a nice feel and sound as well as good precision, always landing on the mark. The bezel leads seamlessly to a flat sapphire crystal. While effective for visibility, I do think a dome would have fit with the throwback design.

On the right side is a screw down crown that measure 7 x 4.4mm. The design is simple, with a coined edge and a signed surface, featuring Jenny’s cool little fish logo. As per the original designs, the case has no crown guards. Flipping the watch over you have a solid screw down case back with a deeply engraved area featuring the Jenny fish logo again, as well as the words “Jenny Caribbean”. Around that are some more details, including, in black print, “50th Anniversary Re-edition.” All in all the case is well executed, and while perhaps a bit plain, seems purposely understated as to not compete with the bezel and overall use of color. The dial of the Jenny Caribbean 300, like the case, draws from the original. It’s, again, relatively simple with a clear vintage aesthetic, but it’s brought to life by the use of color. In fact, that’s where I want to start, with the incredible blue on this dial. I’ve seen many a blue watch, and even put together a guide on them, but this blue surprised me. It’s a gorgeous, deeply saturated medium blue with a slight hint of green. I suppose you could call it “Caribbean” blue, but if you’re familiar with oil paints, you (and I) might see it as Cerulean blue… which is easily one of the most beautiful colors on earth. So, yeah, I like the blue. It’s also available in black, orange or silver, with various bezels, but to my tastes, none compare with this blue. The markings are fairly sparse, with a primary index that is set slightly in from the dial edge of applied steel markers with lime strips at 12, 6 and 9, and then smaller lume rectangles for the other hours. Encircling that is a minute/second index of fine white lines getting slightly heavier at intervals of 5. Below twelve is the Jenny logo, above 6 it reads “caribbean 300” and “300 meters/1000 feet” on two line in small text. Generally speaking, it’s a minimal dial, with a decent amount of open space. That said, it works and is close to the dial of the 700.

At 3 is a date window with a silver border showing the black on white date disk. The black on white disk works here as something dark would have felt like a hole where a marker should have been. That said, the location irritates me a bit. This is due to the design of the movement, but the date window is set in, closer to the center than in aught to be, throwing the balance off. Perhaps a small “cut-off” marker should have remained between the window and the outer index. The simplicity of the dial starkly contrasts the complexity of the bezel. Typical dive bezels just show elapsed time, often with a greater density of markers from 0 – 15. The bezel on the Jenny Caribbean 300 is a patented design known as a decompression bezel, which dates back to the early 70’s. How does it work? Great question! I’ve been reading about and honestly, it’s beyond me as the language of diving is not one I speak. But in a very general, perhaps naive way, it tells a diver how long they need to decompress before coming to the surface depending on their depth and the amount of time they’ve been submerged. The information is broken down into multiple zones, each with a different significant bit of information, hence the ring structure. Long story short, unless you’re an advanced diver, this is probably just going to be a cool aesthetic detail, one that speaks clearly to the heritage of the brand.

The Jenny Caribbean 300 features dauphine style hour and minute hands with a large amount of lume filling. The seconds hand is a straight stick with an arrow pointer. Both seem close to the original, though marginally different. Regardless, they work with the style of the watch. The markers, hands and bezel all feature C3 lame which glows brightly. The hands and bezel origin in particular hold their glow for a while. The Jenny Caribbean 300 features 21mm lugs (yes, another 21mm) and comes with either a rubber strap or a steel “beads of rice” bracelet. We had the latter, and it’s a very bracelet that speaks to 60’s/70’s divers. It features solid end-links and a straight design with brushed end pieces and matte “beads”. The beads themselves are in fact not individual, but rather are a molded unit. The clasp has is a fairly standard locking style with a dive extension that can fold out. On the clasp are two jenny logos. The bracelet works aesthetically and is also very comfortable, with a lighter feel than modern bracelets often have. 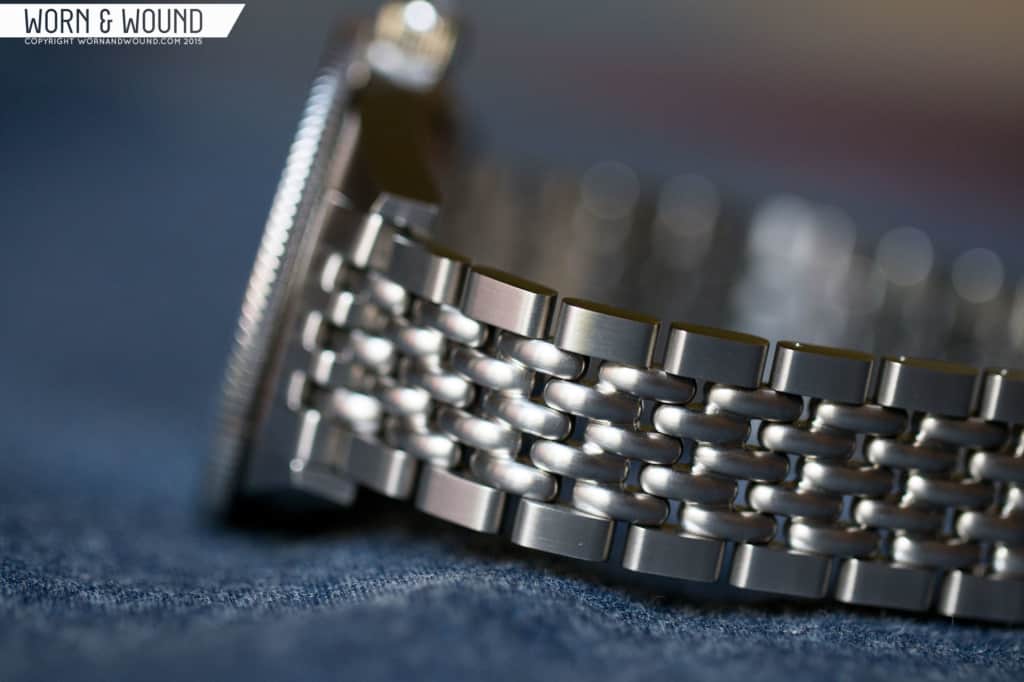 Because of the rich blue on the dial and bezel, the 300 aches to be paired with leather. I found that our Chestnut Model 2 did the trick, as the bright, honey leather really brought out the blue and vice versa. On leather, the watch also takes on a slightly different feel, one that is more casual, emphasizing its vintage qualities. On the wrist, the Jenny Caribbean 300 wears well, though verging on large. The 42m diameter works, and gives the bezel some room to breathe, but the lug-to-lug is almost too long. It comes close to the edge of my 7″ wrist, but doesn’t go over. So, on my wrist it still works, but on smaller wrists it might not. The height isn’t bad either, so it doesn’t feel clunky or top heavy, adding to comfort. Aesthetically, it’s very attractive, mixing a sober design with bright colors. What you have is something very versatile. Clearly, it can be worn as a sport watch with confidence from the 300m WR. Then it can be casual, playing off of the blue with other colors and materials. Lastly, on the bracelet, I think it could be pulled off at least as business-casual. It’s sharp and handsome, with no ostentatious details. The bezel has a certain density to it that might garner some attention, but it looks purposeful, because it is.

The Jenny Caribbean 300 is a nice watch that will certainly appeal to dive watch enthusiasts. It’s very cool that they made a 50th anniversary watch, and that it’s from the original family, not someone who bought up the name along they way. It’s certainly well made and finished, with a crisp case and a clean dial. Their use of color is amongst the best, with that incredible, rich blue just adding so much character and style to the watch.And if the blue doesn’t do it for you (are you crazy?!) the black and yellow or all orange should do the trick. At $1,290, it’s not inexpensive, but it’s in-line with modern Swiss-divers as well as their sister brand, DOXA, and the quality is certainly there. My one real issue with the watch is conceptual, and it’s that the 300 could have been more vintage feeling. Unless their plan is to relaunch Jenny as a modern brand, there really wasn’t much of a reason to modernize elements. The original, which was big for the time, is perfectly in balance at 39.5mm and has that quintessential mid-twentieth century domed crystal. As is, they made it larger and added sapphire, which while more durable, takes away a bit of charm. It’s also a bit odd that the original from 50 years ago would have a higher water resistance than the re-edition. Might as well have kept it at 700m.

Author Zach Weiss
Zach is the Co-Founder and Executive Editor of Worn & Wound. Before diving headfirst into the world of watches, he spent his days as a product and graphic designer. Zach views watches as the perfect synergy of 2D and 3D design: the place where form, function, fashion and mechanical wonderment come together.
wornandwound zsw
Categories:
Review
Tags: