The historical Bulova “Moon Watch” has a long and fascinating, albeit a somewhat convoluted, history. The watch was made for Astronaut David Scott, who wore it on the Apollo 15 mission. His watch surfaced in 2015, and later that year it was sold for a whopping $1,300,000 at auction. Last year, Worn & Wound contributor Hung Doan did a deep dive into the watch. I won’t spoil what he discovered here; I’ll just say that his research took quite a few interesting twists and turns along the way (seriously, if you haven’t read it yet, do it now and come back to this review. It was one of my favorite stories of 2016). Capitalizing on the hype surrounding the story and watch, Bulova released their first reissue to great acclaim in 2015. $550 retail got you a relatively faithful recreation of that historic model, and the watch, given its cost and adherence to  the source material, was a massive hit for the brand. Bulova then released a follow up in 2017, tweaking a few things along the way. And that’s what we’re looking at today—the 2017 edition of the Lunar Pilot Chronograph.

The coated stainless steel case measures 45mm wide, 13.5mm thick, 52mm lug-to-lug, and it has a 20mm lug width. It’s a big watch and I normally wouldn’t consider something that big on paper for myself. However, on the wrist, the Lunar Pilot doesn’t wear that big. This is largely due to the black case, which pulls the whole thing in. I recall not feeling the same way about the first bead-blasted iteration of the watch. That one looked and felt closer to its 45mm. It’s interesting how a black case can make such a difference. The tall bezel and proud crystal. The case geometry looks really nice in profile, with the curving lines of the lugs playing against the tall, cylindrical bezel and flat sapphire. The overall fit and finish of the case is top-notch, too. It’s a matte, black steel that looks really clean against the dial of the watch. Though I really liked the look of the first iteration, I think the all-black case takes the cake.

There are a few details that I really like here. The first of which is the tall, flat crystal, which sits high off the bezel. Yes, it does add some height to the watch, but it also plays up the neo-vintage vibe of the piece. I’ve read grumblings from people worried about damaging the crystal, but to be perfectly honest that wouldn’t be a personal concern. While there’s a slight increase in chance you might damage the crystal here, if you treat this watch the way you would any other watch you value, then you’ll be fine. 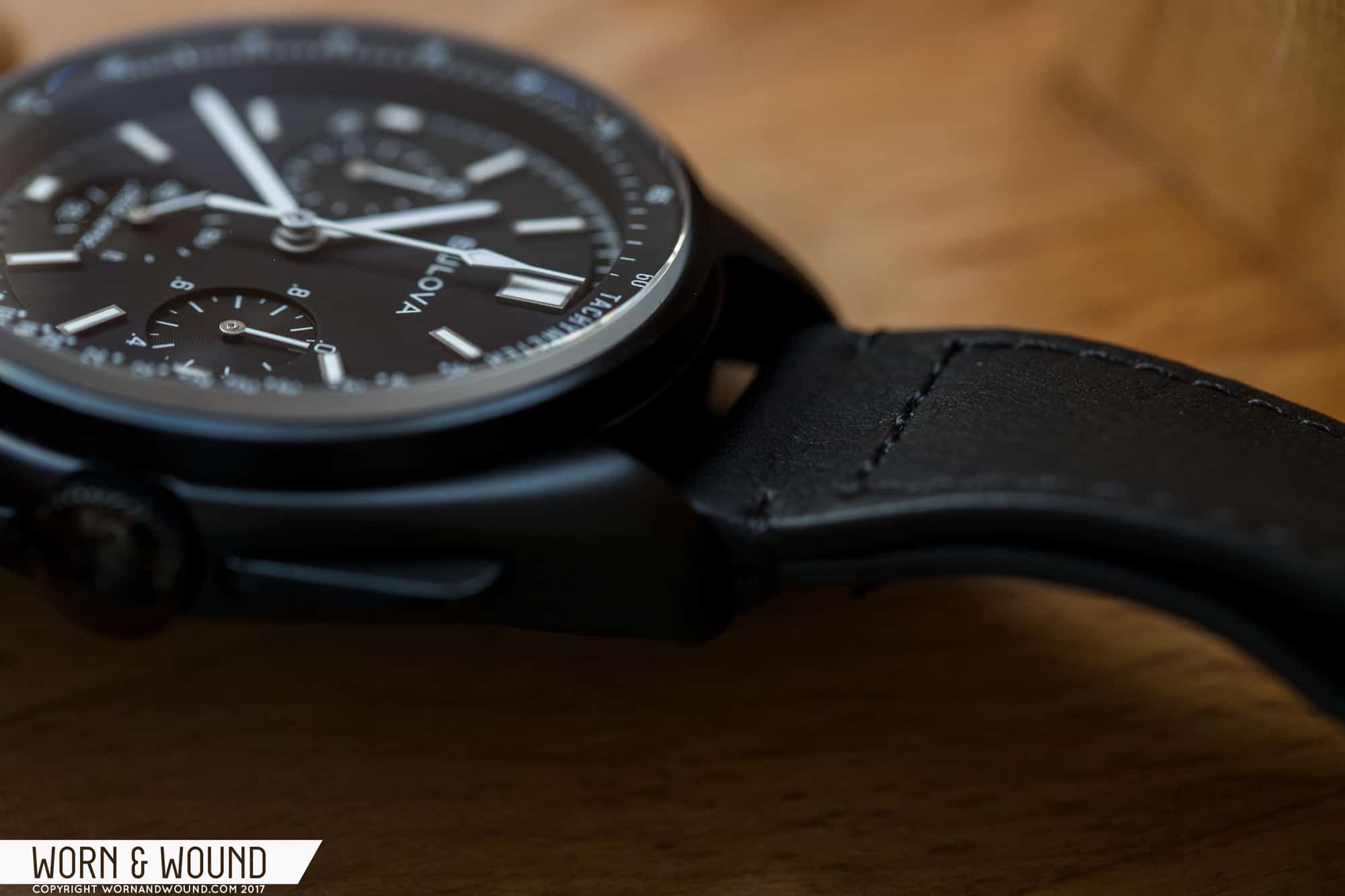 The second are the elongated—true to the original—pushers, which have a satisfying click with an adequate amount of resistance when pressed. I also like the mix of finishing here, with the tops of the pushers and the crown at three featuring a high-polish that creates a nice break from the rest of the matte case.

One of the reasons the size works as well as it does here is that the dial doesn’t compensate to make up for the larger size of the case. There isn’t an excess of negative space. None of the components are needlessly enlarged or elongated. Simply put, everything here looks balanced and as it should be.

The dial is framed by the tachymeter ring, which stands taller than the rest of the dial. Moving inward, you have a stepped ring adorned with concentric grooves. Here you’ll find a 1/5th seconds scale, with each second (also, each minute) represented by an elongated tic. A great example of a complex, symmetrical dial. Note the height of the tachymeter ring. Taking another step toward the center, you have the primary section of the dial sitting on its own plane. Here you’ll find applied, rectangular indices at each hour, three sub-dials, and minimal branding. The sub-dials are actually on the same plane as the aforementioned seconds scale so they pick up the same concentric pattern. The sub-dial at three represents the 1/10th of a second counter, the one at six is the running seconds, and the one at nine measures elapsed time up to an hour.

There are two changes here from the first iteration of this watch that I really like. The first is the lack of a date window at 4:30, which keeps the dial symmetry intact. The second is the use of the old, serif-free Bulova logo, the same one that you can see on the historical model.

Powering the watch is a movement worthy of some note. The 262 kHz caliber is a high-frequency quartz movement that Bulova calls “High Performance Quartz.” As the name makes clear, these movements operate at a much higher frequency than standard quartz and mechanical movements, resulting in tighter accuracy tolerances. To conserve battery life, the 1/10th second counter at three stops running after 30 seconds of operation.

The included strap is a pseudo mil-strap; I say pseudo because it doesn’t actually loop through the spring bars, but rather it attaches the way a normal two-piece strap would. There is, however, a second strip of leather that loops behind the case the way a mil-strap would. Overall, it feels like a quality band (I wouldn’t rush to swap it out like I would with most OEM straps). It’s finished with edge paint and matching black hardware. The Lunar Pilot Chronograph retails for $595. Admittedly, that’s not cheap when it comes to quartz, but it’s worth noting that this isn’t a run of the mill quartz movement or watch. That, coupled with the fact that the rest of the package is of excellent quality, makes this a watch you should really consider, even if you already own the moon watch. Bulova

Author Ilya Ryvin
Ilya is Worn & Wound's Managing Editor and Video Producer. He believes that when it comes to watches, quality, simplicity and functionality are king. This may very well explain his love for German and military-inspired watches. In addition to watches, Ilya brings an encyclopedic knowledge of leather, denim and all things related to menswear.
ryvini
Categories:
ReviewWatches Under $1000
Tags:
bulovaLunar Pilot ChronographMoon watch
Related Reviews
Review / Review