Like many of you, I’ve had a love/hate relationship with Halios for years. The watches are fantastic, and I genuinely enjoy the brand’s creator, Jason Lim. That said, gathering intel on new releases, and deciphering how to actually obtain one have added some unwelcome drama to my experience of the brand. On the bright side, that makes finding and owning one all the more rewarding. Such is the case with the Fairwind, a watch that had been on my radar since first being shown back in 2019 alongside the upcoming Universa. Thankfully, someone far more prepared for the sale than myself was willing to depart with his Bathyal blue example with blue dive bezel. Thank you, kind soul. 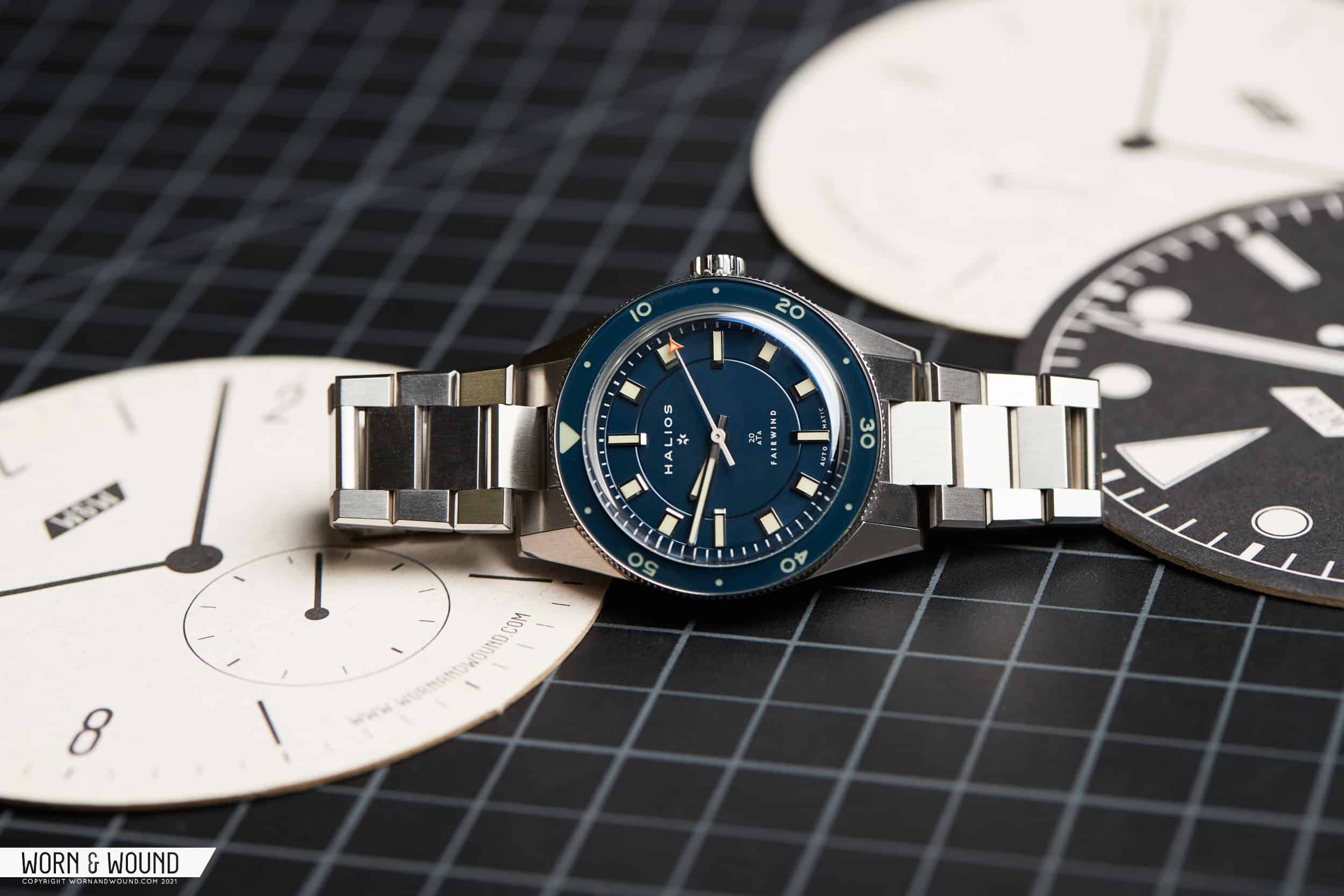 Why all the fuss with Halios? As the cliché goes: it’s all in the details. Halios gets them right, and has developed a bit of a cult following as a result. I hate to say if you know, you know, but it’s apt here. If you don’t, well, that’s okay, too. Read on.

From forum darling to mainstay in the independent scene, Halios has come a long way since its inception in 2009. The driving force behind the brand has remained largely unchanged, however. You may have noticed, Halios operates on their own timeline, producing watches in a manner commensurate with their desire for quality, rather than to meet shifting trends and a growing demand from the enthusiast watch scene, which has grown considerably since 2009. While collectors and would-be buyers may experience some frustration in the process, you can rest assured that the watches themselves live up to the vision set forth by Jason, without compromise. But I’m not here to armchair quarterback Halios’ demand planning and operations, I’m here to talk about the Fairwind, something I’m far more qualified to offer my opinions on.

The Fairwind (along with the Universa) represent a new direction in the Halios design language, layering more elements atop what has been quite minimal in the past. The Seaforth, reviewed here back Zach back in 2017, was a masterclass in simplicity, and while the Fairwind brings more details to the dial, the sense of balance and legibility has been retained. The Fairwind offers some levity in its design in a way the Seaforth didn’t, and that may not appeal to everyone but it expands the language they’ve crafted into new territory without relying too heavily on the same dive watch tropes we’ve seen time and again. In fact, the Fairwind is not really a dive watch at all. Sure, you could call it that, it has a 200 meter depth rating, a bezel that rotates, and even big blocky hour indices, but a closer look reveals a watch with more universal aspirations. This is an aggressive case. At 38mm (48mm lug to lug) it’s not large, in fact the size is near perfect for my wrist; rather, the aggression comes from the angularity of the lugs both in their transition from the case, and their edge finishing. In a word, the whole case could be described as ‘sharp’ and if I had a second word I’d go with ‘precise’. The surfaces are flat, even at the chamfers, giving an origami like quality to the geometry. The brushing on the top of the lug is completely vertical, keeping it high and tight light a Johnny Unitas haircut. There is a chamfer present that tapers toward the case, visually shortening the somewhat long lugs. The side profile carries through from lug tip to lug tip in a svelte single motion, while the undercarriage tucks in underneath. It’s an interesting case that feels razor precise at every angle, and most importantly, does well on the wrist. The crown is the only factor that appears a smidge out of line, as it protrudes from the case a hair more than you’d expect, but in doing so makes for much easier manipulation. 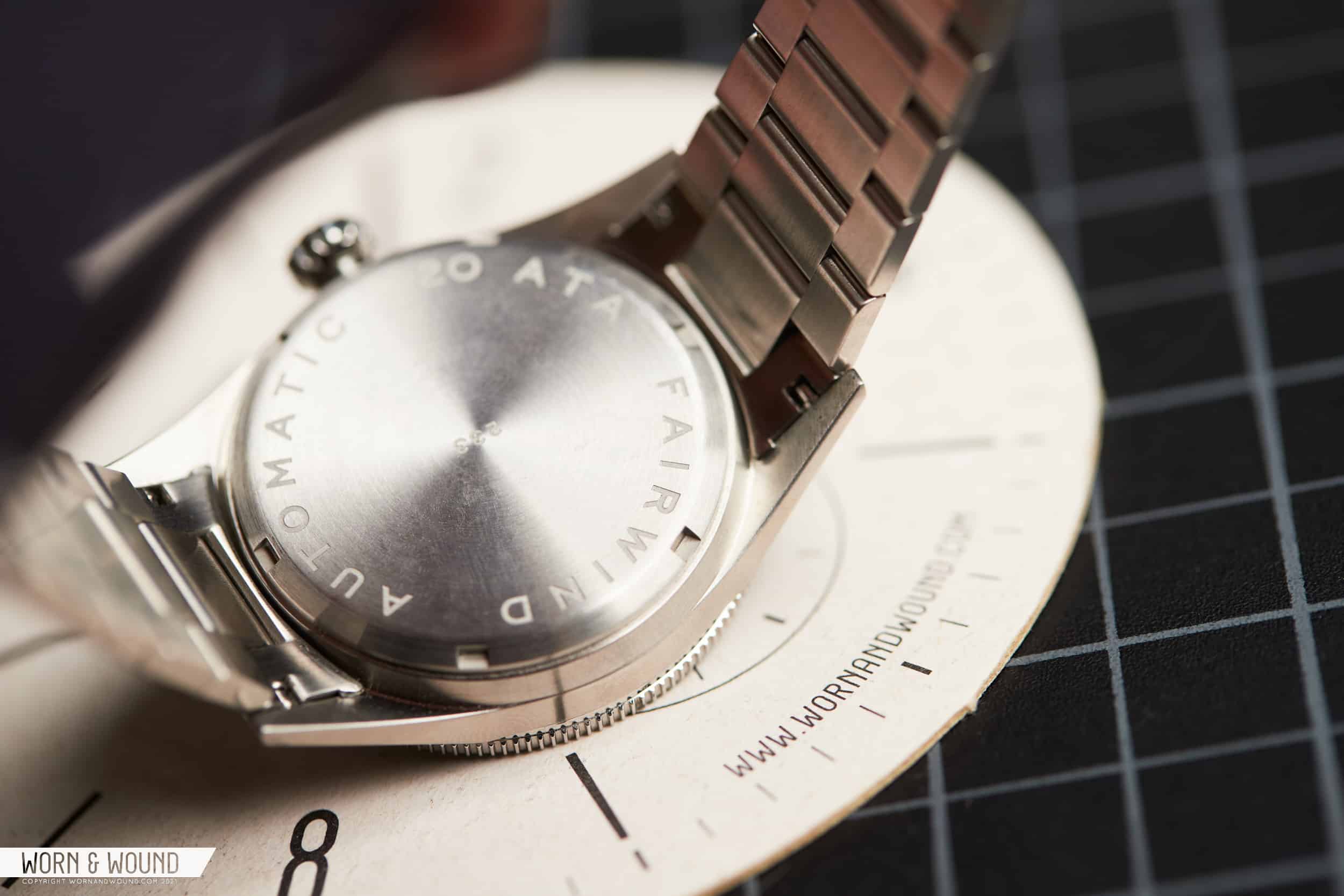 Overall this is compelling case design thanks to the buttoned up execution. It feels more direct than the Seaforth, which has a larger, blockier case with crown guards. The Seaforth is very comfortable itself, but the Fairwind shifts the proportions into more dramatic territory and as a result, has become a bit polarizing among enthusiasts. I’ll put it this way, I owned a Seaforth for about a year and loved it, but I never gave the case a second thought. With the Fairind, I find myself noticing the case with some consistency, and that likely has something to do with the bracelet. More on that later. This Fairwind is equipped with the Bathyal blue dial and sapphire dive bezel. I’m no diver, but in my experience dive bezels usually have the first 15 minutes marked off, and only turn one direction, neither of which are present here. A bi-directional suits my needs just fine, however, and while some minute hashes would likely be useful from time to time, I’ll take the slight inconvenience in favor of the cleaner aesthetic. The dial itself has a minute track running the entire perimeter, which should work just fine in a pinch. The dial itself is quite interesting for a few reasons. First, the color, Bathyal blue, is rich and complex, and while clearly blue, there’s a hint of green to my eye and in daylight it really sings. The most distinct feature of the dial are the hour markers, which are large, squared off cubes filled with lume. The square lume containers get a polished bevel toward the center of the dial, but there is no back wall to close them off. As a result, they have a visible “U” shape at the back where the height of the lume doesn’t quite match that of the walls containing it, creating horns at the back edge of the hour blocks. Whether or not this was intentional I’m not sure, but it’s a quirk I notice each time I glance at the watch.

The inner dial gets a recessed ring creating a boundary between the hours and minutes, and the center portion of the dial, a line crossed only by the narrow cardinal hour markers. We saw something similar in the Delfin, however here the texture and color does not change between the sections, making it a far more subtle feature. Finally, the hands themselves are baton shaped with enough width to carry a healthy portion of lume down their center. They are highly legible against the dark dial, and easy to place in low light settings. The seconds hand gets an orange arrow at its tip with a dollop of lume in the middle, allowing you to see if the watch is still running in low light situations. The orange is a beautiful touch here against the blue dial and bezel, and while it’s the only point of color in sight, it does well not to draw too much attention to itself thanks to its size. It’s a favorite detail of mine. Another detail I’m quite fond of is the grouping of the “20 ATA” underneath the hand stack. The 20 sits atop the flat portion of the “T” with the “a”s tucking in on either side. It would have been so easy to simply write 20 ATA under or above the Fairwind, like every other watch does, but the fact that it gets its own little design speaks volumes to the watch’s character as a whole. Side note: ATA, or Atmospheres Absolute, is different than the usual ATM label we see, representing the total ambient pressure on the system being measured. The Fairwind is offered on a three link, brushed steel bracelet, and like the case, it’s a study in clean, angular design. Each link is chamfered at its end, creating mobility between the sections and catching a lot of light in the process. The bracelet as a whole feels a bit industrial compared to something like the brushed oyster bracelet you’d find on a Sub, but the precision in its build feels airtight. A remarkable feat considering the sub $1,000 price tag on the Halios. Of the watches I own in this price range, none have a bracelet on them (whether they came like that or not). They just aren’t very good, on average. The Fairwind is an exception, and while it won’t be worn exclusively on the bracelet, it’s good enough that it could be. Not only is the fit and finish excellent, the clasp features a quick adjust mechanism that’s triggered with the push of a button. It’s simple and effective, covering the lenge of a full link for fine tuning the fit.

Being a Halios, the watch also works quite well on a fabric strap, but the drama of the lugs does best when paired with the bracelet, I’ve found. In removing the bracelet, you’ll find the end link is fit to the case and lug span with such precision that there’s near zero movement with which to remove it using the usual tool. It’s possible, but difficult. I’d recommend using spring bar tweezers for a cleaner process. Some drilled lugs would have been welcome here but that would have ruined the lovely chamfer on the outside of the lug end. Whether on the bracelet, or something from your strap collection, the Fairwind wears beautifully. The lugs are long, but with a 48mm lug to lug, not too long, and thanks to their angle they do well in conforming to the shape of the wrist. At 12.4mm thick (including the domed crystal), it feels slightly chunkier than you might expect, and doesn’t sit as flat as the Seaforth, but it’s certainly manageable. Halios is using a Sellita SW-200 here, meaning a thinner case should have been possible (considering the depth rating isn’t massive), especially in dateless guise, but again, not a huge issue in practice. 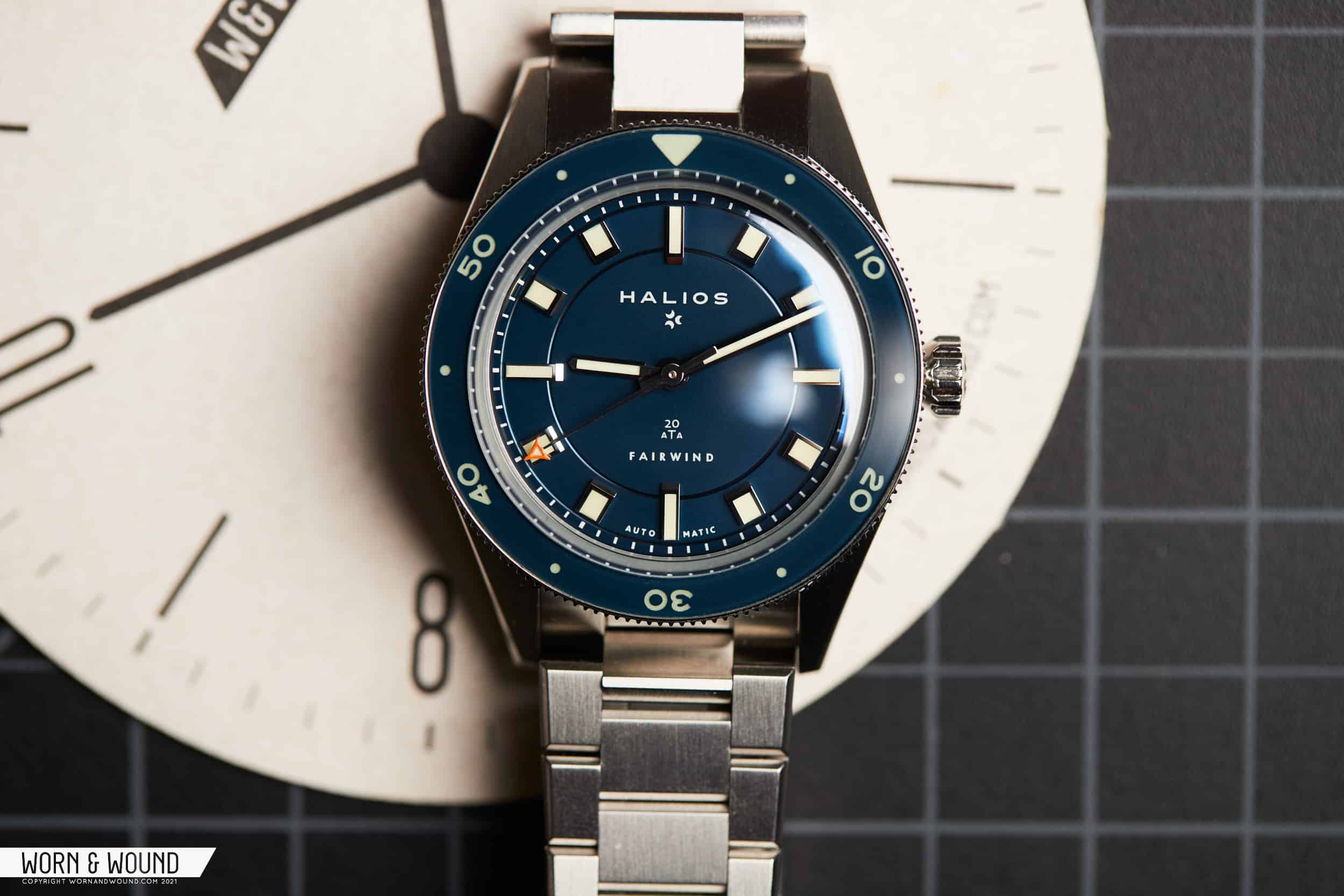 As an admittedly biased reviewer, I feel that the Fairwind does a top job at living up to the lofty reputation that Halios has created for itself. The watch is a well thought out all-rounder that captures the core of what a great sport/tool/whatever watch should be: capable, legible, and accessible. The fact that it nails such an interesting and subtle design with the manner of precision that it does, all for under $800, is exactly why these things sell out so quickly. The exact price, by the way, is $775, and yes, more are coming. Halios.

Author Blake Buettner
Blake is a Wisconsin native who’s spent the past decade covering the people, products, and brands that make the watch world a little more interesting. Blake enjoys the practical elements that watches bring to everyday life, from modern Seikos to vintage Rolex. He is an avid writer and photographer with a penchant for classic cars, non-fiction literature, and home-built mechanical keyboards.
Categories:
FeaturedReview
Tags:
Fairwindhalios
Related Reviews
Review / Watches Under $1000