As we wrote a few weeks back, at the dawn of the 15th century much of Europe was divided into small, competitive city-states. Large-scale trading across the continent brought newfound wealth, and different regions used their resources to invest in architecture and arts, building incredible cathedrals and palaces. Others across Europe, however, put their wealth into the new field of mechanical horology, creating clocks as city centers that stand to this day. In the second installment of Time Off the Wrist, we took a look at one of the greatest examples of this—the Zytglogge of Bern, Switzerland. Today, we’re traveling 500 miles northwest to the great Prague Orloj, or the Astronomical Clock of Prague, in the heart of the Czech Republic.

As a center of commerce and culture for centuries, Prague was the thriving, cosmopolitan heart of the Kingdom of Bohemia. Its position as a crossroads of north and south, east and west had made Bohemia the most powerful kingdom in the Holy Roman Empire by the dawn of the 15th century, elevating their king Wenceslas IV to the imperial throne.

The wealthy traders and nobles of Prague parlayed this increased wealth and power into great monuments throughout the city—expanding the central St. Vitus’ Cathedral with an ornate new interior, completing the massive Charles Bridge across the Vlatva river, and chief of all, a cutting-edge addition to the south wall of the Prague town hall. The Orloj, as it was dubbed, was commissioned by the city council in 1410 and constructed by two of the finest horologists of their generation: clockmaker Mikuláš of Kadan and Jan Šindel, head of mathematics and astronomy at Prague’s Charles University.

The original clock was simple but impressive, a full suite of astronomical functions in one dial, and this clock dominated the city center for 80 years before the council again decided to expand it. The person they brought in for the expansion was a savant—a mysterious man with an almost mystical skill for clockwork named only Hanuš. In 1490, Hanuš accepted the offer and set about the daunting task of making the Orloj the finest clock anywhere in the world. To this end, he completely redesigned the mechanism in the course of the next three years. 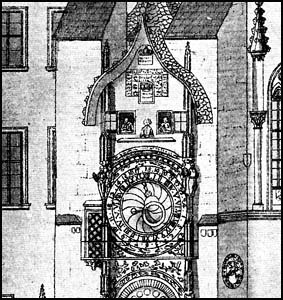 While this alone was world-class clockmaking for the time, Hanuš also created a uniquely simple solution for the moon phase indicator. Most moon phases to this day rely on a gear train connection to the main movement, but the Orloj’s moon phase is a black and white ball rotating on the end of the lunar calendar revolutions hand, completely disconnected for the rest of the movement. So how did it move to remain accurate? A 57-toothed gear inside the ball with a counterweight is moved two teeth a day by gravity alone.

This lone innovation was not enough for Hanuš, however, and in addition to the astronomical clock he added an entirely new calendar dial marking each day of the year along with fine mural paintings representing each month of the year and the 12 signs of the zodiac on a gilded baseplate.

The final additions were the automata—each hour on the hour, the four figures flanking the astronomical dial come to life. Three of the ornately carven figures represent cardinal sins—vanity, greed, and lust—while the final, skeletal figure of Death strides in their midst. As the hour strikes, the figure of Death rings its bell, and the sinful mournfully shake their heads side to side. Upon its completion in 1493, the updated Orloj was undoubtedly the envy of the world, and the Prague city council agreed that Hanuš had fulfilled his promise to the city. In fact, many in the council argued the master had fulfilled it too well—after all, if Hanuš could create such a marvel for the people of Prague, what was to stop him from creating an equally impressive or better work for a rival? In secret, a rogue group of councilmen met to discuss ways of preventing such a loss of prestige for the city. The plan was set into action the day of Hanuš’ payment. Shortly after receiving his gold, the master was waved into an antechamber, held down, and his eyes were burned out with a red-hot iron poker. The newly blinded Hanuš was rightfully furious, and local legend says he retaliated in two ways. Firstly, he laid a curse upon the city of Prague—whenever the Orloj stopped working, the city would suffer horrible misfortune. Secondly, and more accurately, Hanuš sent an apprentice into the tower at night and had the man smash the inner workings of the movement. Prague’s new crown jewel had been broken, and Hanuš’ designs were so far ahead of their time that no one could repair the clock until 1552.

Over the next four centuries, the Orloj received periodic minor expansions and renovations, but the base design put in place by Hanuš remained remarkably intact. In 1945, however, the antiquated curse of Hanuš reared its terrifying head in the final days of the Nazi occupation of Prague. On May 5, a band of Czech resistance fighters overwhelmed the small SS garrison occupying the city’s radio tower and urged the people of Prague to fight back against their oppressors. Fighting broke out in the streets across the city, and in the struggle several incendiary rounds from a German light armored vehicle hit the Orloj and set several wooden figures and the calendar dial ablaze. Almost immediately, the beleaguered German garrison was reinforced with a Waffen-SS armored unit from the surrounding countryside, and the newly strengthened Nazi response was swift and brutal. Conspirators and innocent bystanders alike were rounded up and executed, SS tanks smashed through the meager defensive barriers the resistance had assembled, and a Luftwaffe contingent heavily bombed several of the city’s most famous landmarks to break the citizens’ will. When the 600th German Infantry Division of the Russian Liberation Army drove out the last of the German forces in the city on May 9th, the death toll numbered over 7,000.

After the end of the war, the Czech government undertook and extensive effort to restore the Orloj to its former glory, and the damaged parts were replaced by exact replicas of the Hanuš originals. The Orloj remains one of Prague’s greatest symbols to this day.

Both the Prague Orloj and the Zytglogge of Bern remain as the finest examples of the first great age of mechanical horology and as enduring monuments to the grandeur of the cities that birthed them. While horology may have advanced vastly in the last six centuries, the concepts in the grandest of today’s grand complications can trace themselves back right here—well off the wrist.

Time Off the Wrist: the Zytglogge of Bern

By Sean Lorentzen 15.06.2017
While mankind’s preoccupation with timekeeping is nearly as old as …
Article / Guides