Faceted crystals may seem like a hangover from an unfortunate ’70s trend—something the watch world has moved on from and possibly even looks back on with slight embarrassment. However, I have always had an infatuation with these watches despite arriving in the world years after their decline.

Seiko were one of the many brands that produced models with faceted crystals in the 1970s, but are also one of the few who tested these waters again several decades later. In the last couple of years, only a handful of brands—among them Rado and Orient—have once again brought watches with faceted crystals to the market on retro styled watches such as the Rado Diastar Original and the Orient Neo 70s.

Seiko’s Vanac series formed part of the wider King Seiko line, which sat just beneath Grand Seiko in terms of quality in the 1960s and ’70s. Produced between ’72 and ’74, the Vanac series showed the funky side of Seiko and in addition to the faceted crystals, these watches often featured unusual color schemes and angular cases. The crystals were typically flat on the top so that there was always a clear viewing window, and the outer areas were angled to create different patterns. The crystals used were glass and were therefore prone to chipping, and pristine examples are now rather hard to find.

Seiko’s revisiting of this peculiarity occurred in the mid-2000s with the first three references of the SARB series. The SARB001, SARB003 and SARB005 garnered intrigue more than captivation to many buyers. The production run lasted nowhere near as long as some of the more popular SARB siblings like the SARB065 Cocktail Time, SARB017 Alpinist, and the more straightforward SARB033/035 that borrowed from the design DNA of Grand Seiko. As such, these three references are increasingly difficult to find today, and the pricing is very much driven by demand.

The case is refined, but unassuming, and shares the same kind of dimensions as much of the rest of the SARB series. The diameter (excluding the crown) is under 39mm and the lug width is 20mm. The case finish is a pleasing mix of brushed lug tops with a high polished bezel and case sides, and the same combination of finishing follows down to the bracelet. The sharp angles created between the lugs and the case sides are a subtle echo of the angles in the sapphire crystal, while also being a slight nod to the angled case of its Vanac predecessors.

The lugs are slightly wider across the top than might be expected, which helps to give the watch a larger wrist presence than its diameter might normally suggest, and it goes hand-in-hand with the overall bold feel of the watch. The total thickness comes in at just under 13mm, which on paper sounds fairly tall, though the sapphire crystal is responsible for a significant part of that measurement. Inside is the 6R15 movement beating at 21,600 bph with hacking, hand-winding, and a date display. It’s visible through the display case back. 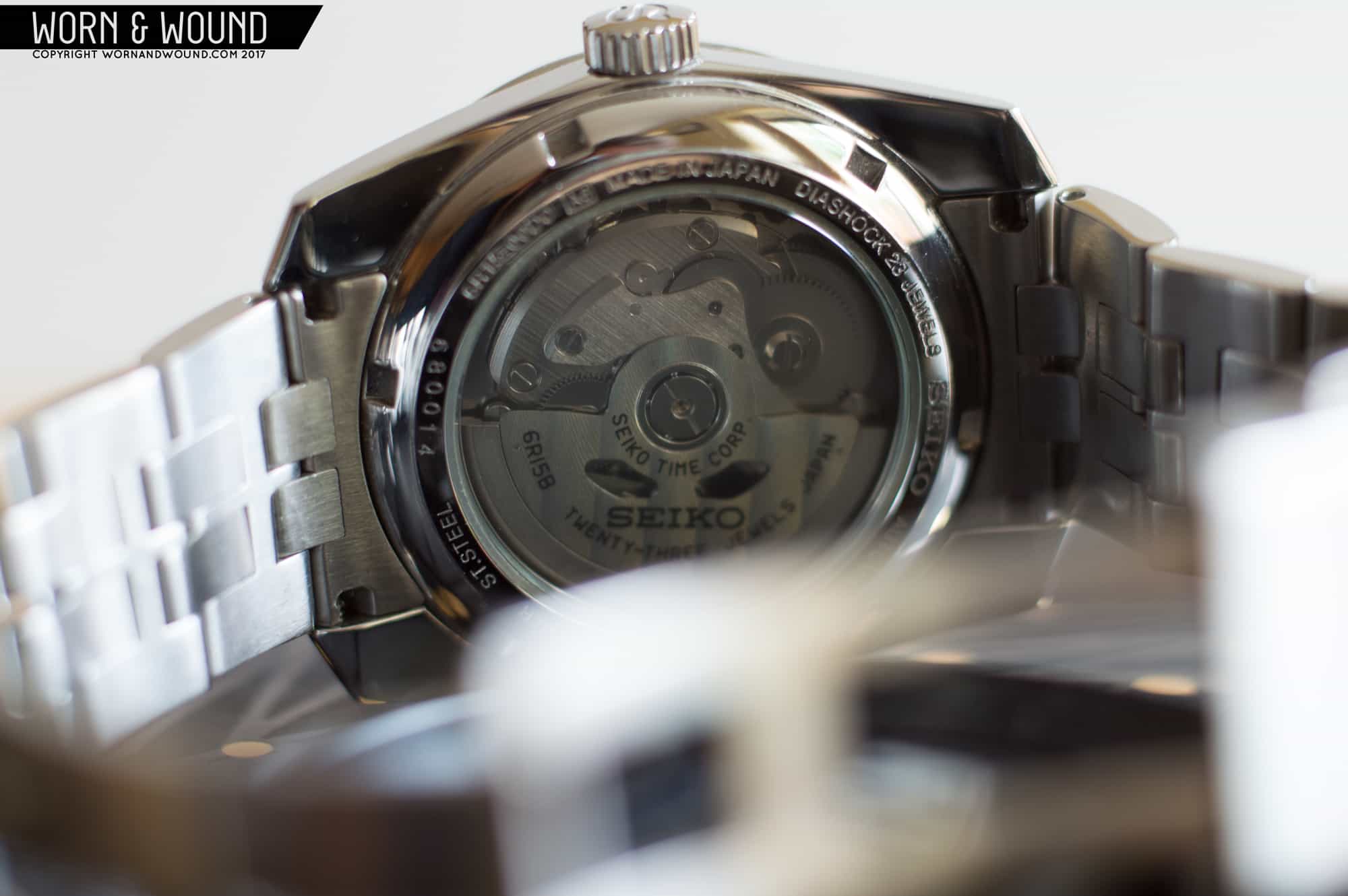 The hands are fairly broad with chamfered sides, but as is the case with the applied indices on the dial, the hands have no lume. To get the maximum visual effect from the crystal, it has no anti-reflective coating on either side. Subsequently, it would be fair to say that legibility ranks fairly low on the list of attributes. The human eye, however, does act as a decent polarizing filter, so photographs which show the crystal surface as largely white due to reflections will actually be much less opaque to the human eye. The three variants in this series differ mainly in the dial color and finish. The SARB001 features a sunburst, sky blue dial with a slight gradient that turns darker towards the outer edge. This color is uncommon today, but it was seen more often in many dials in the 1970s, which this venerates. The SARB003 is the most muted and therefore versatile of the three. The slate-grey dial features fine concentric grooves rather than a sunburst pattern, with additional brushing on the bezel and bracelet.  Aside from the crystal, the only eye-catching feature is the red second hand. The third and final variant is the orange dial SARB005. Despite owning all three, this is the only one that has stayed with me. Orange dials are far from uncommon, but the particular shades that are produced by the sunburst dial and faceted crystal here are fairly unique; what dazzles in direct sunlight as vivid orange can become burnt copper in low light, and the dial can take on four or five shades in-between with a turn of the wrist.

A large proportion of these watches were sold to the Japanese market, and secondary sales avenues targeting Japan are probably the best way to pick one up on the used market today. The original sticker price was 57,500 Yen (about $506 today) and you would do well to find one for less than that. I’ve seen these go for somewhere in-between $500 and $800, but again these can be a challenge to find. Altogether, the unusual crystal may be described as more fascinating to see than easy to live with, but it does make for an interesting watch to wear.

Author Brad Homes
Brad stumbled into the watch world in 2011 and has been falling down the rabbit hole ever since. Based in London, Brad's interests lie in anything that ticks, sweeps or hums and is slightly off the beaten track.
bradwatch
Categories:
FeaturedWatches Under $1000
Tags:
King SeikoSarb001Sarb003Sarb005seikoSeiko Vanac
Related Posts
Article / Featured