Seiko dive watches have had a bit of a renaissance in recent years. If you’re a regular around here you’ve no doubt noticed. Gone are the SKX models that likely got many of us into the hobby, leaving us with clear (ish) segments of divers from the Seiko 5 Sport to high end SLA models. Oh, and there’s a lot in between. The SRPs, SPBs, and SLAs can be difficult to differentiate at times, but Seiko is paving the way for a more robust future for their dive watches, by way of resurrecting their past. We’ve seen this done to great effect with watches like the SPB149 and SPB153, and their latest, a descendent of the 6159 lineage, the SPB187. 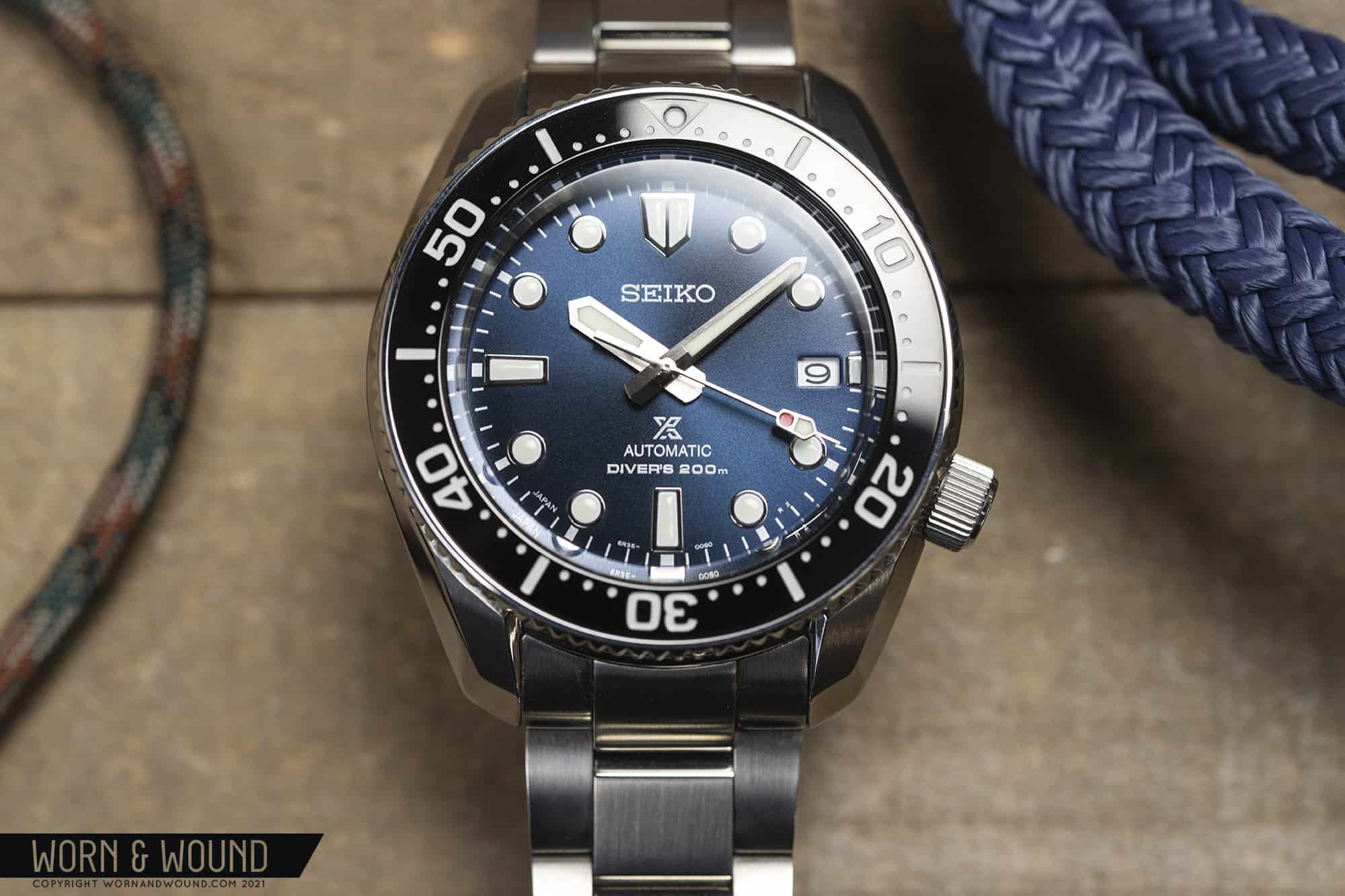 Zach Weiss brought you a concise look at the SPB187 and SPB185, as well as where they fit into the bigger picture of Seiko divers, when they were revealed right here, and Zack Kazan gave us some perspective on what the SPB149 and SPB153 mean in the broader context of Seiko divers right here. If you’re left scratching your head at the letter/number salad, you’re not alone, we’re in dire need of some nicknames here, people.

Hands-On With The Seiko Prospex SPB187

The SPB187 may find its inspiration in the vaunted reference 6159, but it differs in one big way and that’s the departure from the monobloc steel case the original was known for. If that’s an important feature for you, check out the SLA021 (and get your wallet ready). Rather, the SPB187 is a multi-piece construction with a screw in caseback and slightly more wearable dimensions, measuring in at 42mm in diameter and 48.5mm from lug tip to lug tip. Thickness is a hair over 13mm, making this a wearable midsize diver. Numbers aside, this is a very easy watch to wear, and carries with it a charm undeniable to the lineage of great Seiko divers. The case itself gets an interesting profile, tapering to a small brushed case wall before angling to the bezel and caseback on either side. It’s shaped in a way that hides much of the heft on the wrist and creates a variety of surfaces, both brushed and polished, to catch light. Looking from the top down you can see the chamfer running the length of the case, with only a small percentage of the brushed lug surface leftover. It’s aggressive in appearance and carries a near equal amount of visual weight as the dial itself. Another case feature you can’t exactly see is the DiaShield application for added hardness and scratch resistance. The case remains the biggest differentiator between the SPB187, the SPB149, and the SPB153 (and their various colorways). The 153, or ‘Willard’ as it’s known, carries a large flat cushion case that makes it perhaps the most outlandish of the bunch (though you could argue, the coolest), looking straight out of the realm of the vintage. Likewise, the 149 carries with it a slim, skin-diver esque look that aligns with the 62MAS, appearing demure by contrast to the other two. Finally, the 187 seen here is the most transcendent in terms of era, looking as modern as ever here. The aggressively cut and shaped case will be just as jarring as the cushion case of the 153. The 149 feels the most approachable to my eye, but the 187 clearly leans modern. Moving toward the dial, the SPB187 receives a black aluminum bezel insert paired with a dark blue dial, while the SPB 185 gets a steel bezel insert and black dial. Seen here the SPB187 gets high marks for contrast and legibility (no surprise for a Seiko diver of any stripe), with everything else falling to the background. The color of the dial is subdued but unmistakable in the right light, while the tip of the seconds hand, with a stoplight style design, presents a small amount of red that it’s easy to go unnoticed at a glance. It’s a detail you’ll come to appreciate as a reference to the historic model it’s based on, and for its execution here as a means to introduce some color. A date window appears at 3 o’clock with a black on white disc underneath. The 6159 had the same placement, but the SPB187 gains a small remnant of the lopped off hour marker, with a sliver of lume between the aperture and the dial’s edge. It even gets its own steel surround, creating quite a bit of visual tension at 3 o’clock. It’s worth noting the press images did not show this bit of lume, and neither the SPB149 or SPB153 share this feature. While not a deal breaker it is a quick that, once noticed, is hard to un-notice. 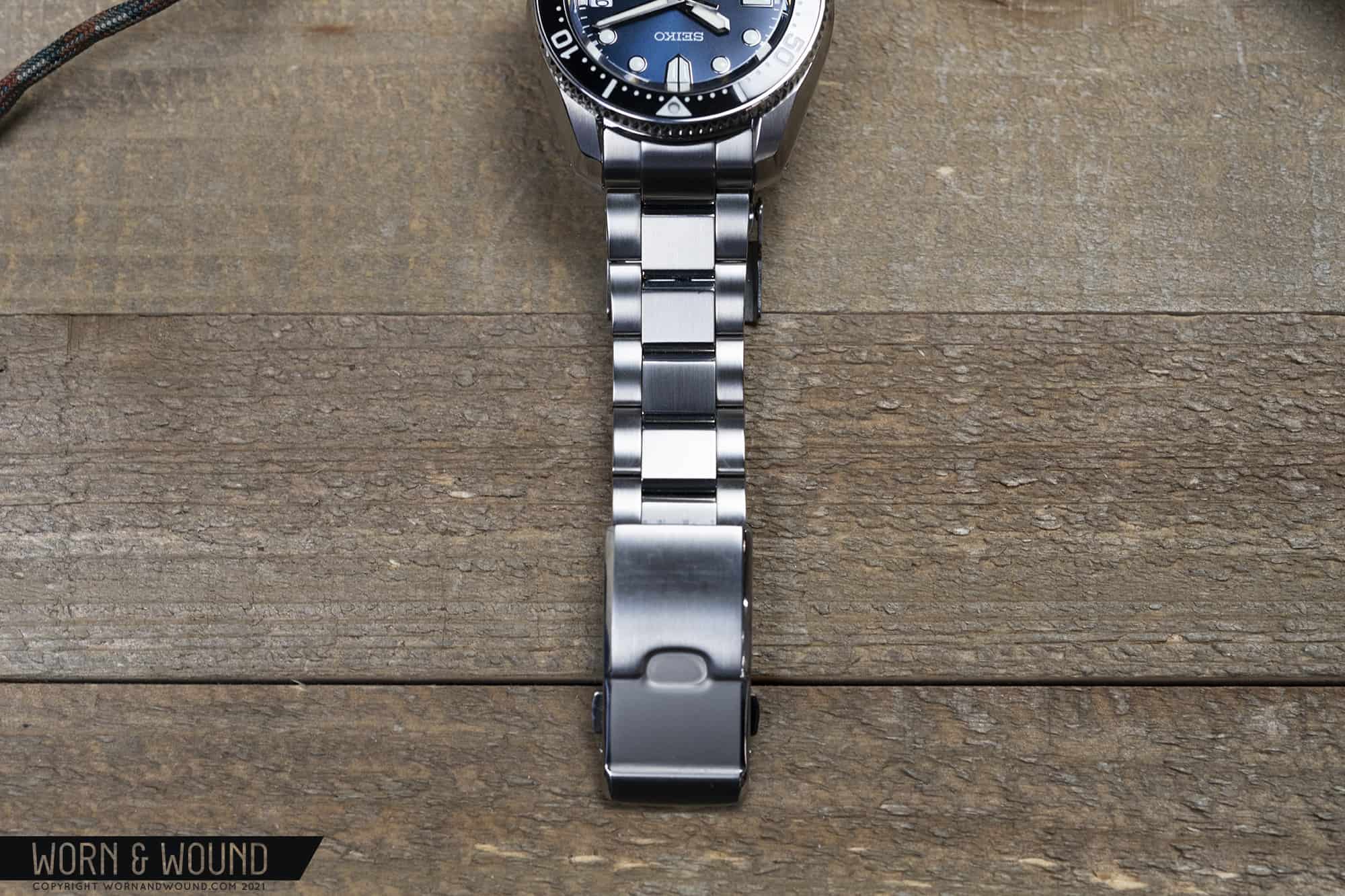 The bracelet on offer from Seiko here is the least remarkable feature of the SPB187. In use, it’s comfortable enough, which is all that matters. While not in use, the bracelet is a bit on the rattley side, falling short of what we’ve seen from the likes of Christopher Ward and Monta. Thankfully, Seiko divers are well known strap monsters and the 187 is no exception.  But if you’re the bracelet type, this one will get the job done, even if it doesn’t leave you inspired. Seiko is using their 6R35 automatic caliber in the SPB187 and SPB185, much the same as you’ll find in other popular Prospex models in this price range. The movement allows for hacking and quick date setting, and provides an impressive 70 hours of reserve. Accuracy is -15/+25 seconds per day but observed we found it performing well within that range. The SPB185 and SPB187 are priced $1,200, placing in the same realm as both the 149 and 153, making a selection of just one that much harder. Each are different enough in their design language and historical reverence, however, that landing on a favorite will easily come down to personal preference. For my money, the SPB149 is still the clear choice of the bunch, but the 185 and 187 offer a compelling, strangely fresh take on Seiko dive watch formula. Seiko Luxe

Author Blake Buettner
Blake is a Wisconsin native who’s spent the past decade covering the people, products, and brands that make the watch world a little more interesting. Blake enjoys the practical elements that watches bring to everyday life, from modern Seikos to vintage Rolex. He is an avid writer and photographer with a penchant for classic cars, non-fiction literature, and home-built mechanical keyboards.
Categories:
Hands-On
Tags:
ProspexseikoSPB187
Related Reviews