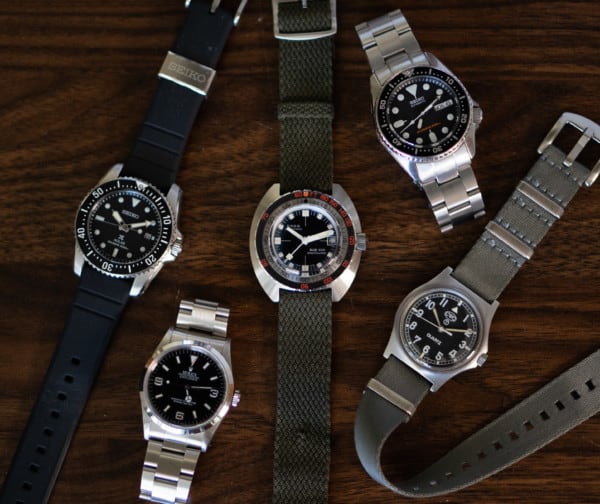 If you don’t know Xetum, you should. Why? Well… They were one of the first internet only watch brands, they are based in California (go USA!), and their watches are simply put, very elegant. Their watches, the Tyndall and Stinson, take elements of 19th century military watch design such as clean and clear numerals, 24 hr indexes and simple straight sword hands, and refine them to create something modern, casual yet dress acceptable, and altogether unique. The most notable visual features of the two watch series are the lugless cases, which when combined with their 40mm diameter make for a very a universally easy to wear watch, and their oversized hex bolt crowns, which is unique to Xetum. All are Swiss made, all have sapphire crystals and all feature quality ETA movements. So when Xetum comes out with something new it is very worth paying attention to… and they just released their first PVD watch. The Tyndall PVD is a simple, but remarkably affective evolution on the Tyndall series. As the higher end offering from Xetum, the Tyndall series has some special and desirable features to begin with. An ETA 2895-2 elaboré grade 27-jewel automatic with small seconds powers the watch. This is a movement that, in my opinion, one doesn’t see used often enough, and it is very well implemented in this dial. The added seconds register and 24-hr index make this the busier of the two series, yet the numerals and indexes are so well proportioned that nothing competes on the dial. The classic military elements are visible, giving credence to watch design history, yet the watch comes across as a purposeful instrument with good style.

The addition of the matte black PVD case, black crown, black leather strap with black stitching and a black clasp take the Tyndall into new territory. Typically speaking, PVD watches have a more aggressive demeanor. And on one hand, the Tyndall PVD is perhaps their most aggressive watch to date. Yet, the watch doesn’t come across like some over-the-top phantom watch. It’s not pretending to be more than it is. Rather, it’s sort of like an Audi S4 in black… Powerful, yet understated and graceful…or to use an analogy that is more popular in watch writing, it’s sort of like James Bond in a tuxedo. Similarly, the Tyndall PVD maintains its appeal as a casual watch with military roots that can translate to a dress setting. The black case against the black dial actually makes the watch even more legible, as the white markings jump out all the more. And as an added bonus that any watch nerd will love, the rotor on the decorated 2895-2 has been blacked out as well.

So, if you are in the market for a PVD watch, but are looking for a sophisticated option that doesn’t sacrifice legibility, the Xetum Tyndall PVD is likely a good choice for you. The Tyndall PVD retails for $1,495 and is currently available for pre-order, shipping on October 23rd. Author Zach Weiss
Zach is the Co-Founder and Executive Editor of Worn & Wound. Before diving headfirst into the world of watches, he spent his days as a product and graphic designer. Zach views watches as the perfect synergy of 2D and 3D design: the place where form, function, fashion and mechanical wonderment come together.
wornandwound zsw
Categories:
Featured
Tags:
ETA 2895-2PVDTyndallXetum
By clicking “Accept All”, you consent to the use of ALL cookies. However, you may visit "Cookie Settings" to provide a controlled consent.
Cookie settings Accept All
Manage consent