The 6309-7040 is undoubtedly one of Seiko’s most iconic divers. Manufactured by the brand from 1976 to 1988, the 6309 was the bedrock of Seiko’s recreational diver collection for approximately 12 years. Amongst Seiko fanatics, it remains one of the firm’s most popular pieces. So when Seiko first announced the SRP77x, the brand’s reissue of the 6309-7040, we knew it had the potential to be a huge hit. In our view, its success would ultimately hinge on Seiko producing a faithful reinterpretation of the beloved diver, keeping the general feel and look of the 6309 while retaining the solid bang-for-your-buck build quality that Seiko is known for. As it turns out, Seiko did not disappoint (read our review here). Full disclosure: I am a huge fan of the 6309. It is undoubtedly one of my favorite watches, and not just from Seiko. So when I reviewed the SRP775 and the SRP777, I did so with a highly critical eye. As I had hoped, the reissue did justice to the original, with enough differences (almost all of them positive) to give the watch a thoroughly modern identity. In our initial review of the SRP77x, we refrained from pitting it against the original too much, preferring to evaluate the watch on its own merits. Today, we’re going to do a one-eighty and turn our eye to comparing the two watches, not with the intention of declaring one superior, but rather to highlight some of the interesting visual and functional differences between the two.

First, let’s take a look at the 6309. The most iconic feature of that watch is the large cushion shaped case measuring roughly 45mm wide with a very reasonable lug-to-lug height of approximately 47mm, a thickness of 13mm, and an appropriate lug width of 22mm. The width suggests a large watch, but the 6309 wears surprisingly smaller, and works on those of us with daintier wrists. The stainless steel case features a mix of finishes, with circular brushing up top, followed by a sharp delineation leading into highly polished sides. The 60-click bi-directional bezel has a matte black aluminum insert. One feature I really like is the way the insert slightly angles down toward the Hardlex crystal, giving the face of the watch some added dimensionality. The bezel has a two-tiered groove pattern that allows for a sure grip, and one that gives the watch a very cool industrial look fitting of its tool watch heritage. The crown, positioned precisely at 4 o’clock, sits securely in a small notch in the case, and screws down to contribute to the solid 150m water resistance. At first glance, the reissue appears to accurately recreate the case. Side by side, however, the differences become a bit more obvious. First and foremost, the case on the SRP77x is a hair longer–measuring at around 48mm–which gives the case a slightly stretched look when compared to the original. That being said, the extra millimeter is hardly noticeable on the wrist (which is what really matters) since the lug-to-lug height remains tempered in relation to the width of the watch. It’s also a little taller given the thicker bezel, but given the way the watch dips into the wrist the extra thickness is negligible. The next apparent difference is the positioning of the crown, which is placed around the 3:45 mark. This concession is likely a necessity rather than a deliberate redesign, implemented to accommodate Seiko’s current movement architecture. The crown architecture is a bit more traditional, akin to what you would find on the SKX007. This is actually a welcome change because the crown on the 6309 is notoriously difficult to work on due to the way it’s built into the case. The reissue also has an upped water resistance of 200 meters and a case that is ISO certified.

The bezel is a more contemporary 120-click unidirectional diver’s bezel with an aluminum insert and shielded lume pip at 12 o’clock. The insert is grained, mimicking the texture found on the original. As it stands, the SRP77x series currently has 4 variants. The 777 (black dial, black bezel) is the closet to the 6309, with the other three introducing new color schemes that aren’t unique to Seiko as a whole, but do lack historical counterparts in the 6309 line. We’ll discuss these variants later in the comparison. Another throwback is the way the insert declines towards the crystal, though it’s certainly not as prominent here as it is on the 6309. The reissue also utilizes a Hardlex crystal (Seiko’s proprietary mineral glass) similar to the one found on the 6309.

As I noted in my review, one of the biggest improvements to the original design is the inclusion of drilled lugs. From a purely functional standpoint, drilled lugs belong on every tool watch, and the SRP77x is exactly that. If you’ve ever tried removing Seiko’s fat spring bars from one of their divers, then you know exactly how difficult that can be. Drilled lugs just facilitate that process. Seiko repeated the above formula with the dial, keeping it mostly intact while modernizing some of the visual and practical elements. So what we here is a dial that is largely identical–the markers, beveled date window, the hilted sword at 12 o’clock, and the chapter ring (although more pronounced on the reissue) are pulled straight from the 6309. The application of the markers is where the reissue stands out. Each marker is surrounded by a fine raised metallic border and filled with copious amounts of lume applied in a way gives the markers a 3-dimensonal appearance. This is one of my favorite upgrades to the dial because it gives the dial a higher end look when compared to the original, which had relatively flat looking printed indices. It also has the added benefit of being an absolute torch at night, courtesy of Seiko’s proprietary Lumi Brite material. The hours and minutes hands are nearly identical to those found on the 6309. The seconds hand, however, deviates slightly from the historical model. It is pulled from the 007, which has the lollipop on the front end of the hand rather than on the counterweight as it was on the 6309. It’s a divisive design choice, even amongst Seiko diehards, though it ultimately has no effect on the actual functionality of the watch as a diving instrument. That being said, I prefer the look of the classic, and were I to nitpick anything from the reissue, it would be this. I might even be inclined to swap out the seconds hand with the appropriate style to closer match the 6309. Despite having only one extra line of text on the dial, the SRP77x series does come across as quite a bit more text heavy than the 6309. You have the “Seiko” logotype under the 12 o’clock position displayed in a larger size than the logotype on the 6309, with the word “AUTOMATIC” moved to the lower half of the dial. Resting above the 6 o’clock spot are three lines of text and branding, starting with the PROSPEX “X” logo, followed by the aforementioned “AUTOMATIC”, and “DIVER’S 200m”. The PROSPEX branding is a bit extraneous and it does unnecessarily crowd the bottom half of the dial, but the larger logotype up top goes a long way in balancing the dial. There are currently four variants slated for release in early 2016. The SRP777–black dial and bezel–is the most direct homage to the 6309. The other three–SRP775 (gilt dial and bezel), SRP773 (blue dial and bezel), and the SRP779 (black dial and pepsi bezel)–have no historical counterparts, but they are common color schemes within Seiko’s current catalogue so it makes sense for the brand to produce these variants. It is interesting to note that had these three models been released back in ’70s, they would not have been out of place.

The “6309” in the 6309-7040 actually refers to the caliber beating away inside the watch. Workhorse gets used a lot to describe Seiko’s calibers, but the 6309 was undeniably that. The 6309 demonstrates a simple build, boasting 17 jewels and an auto-winding mechanism that lacks both hand winding and hacking features. It was simply built to be robust, and I’ve heard stories of movements going strong thirty years without a single service. 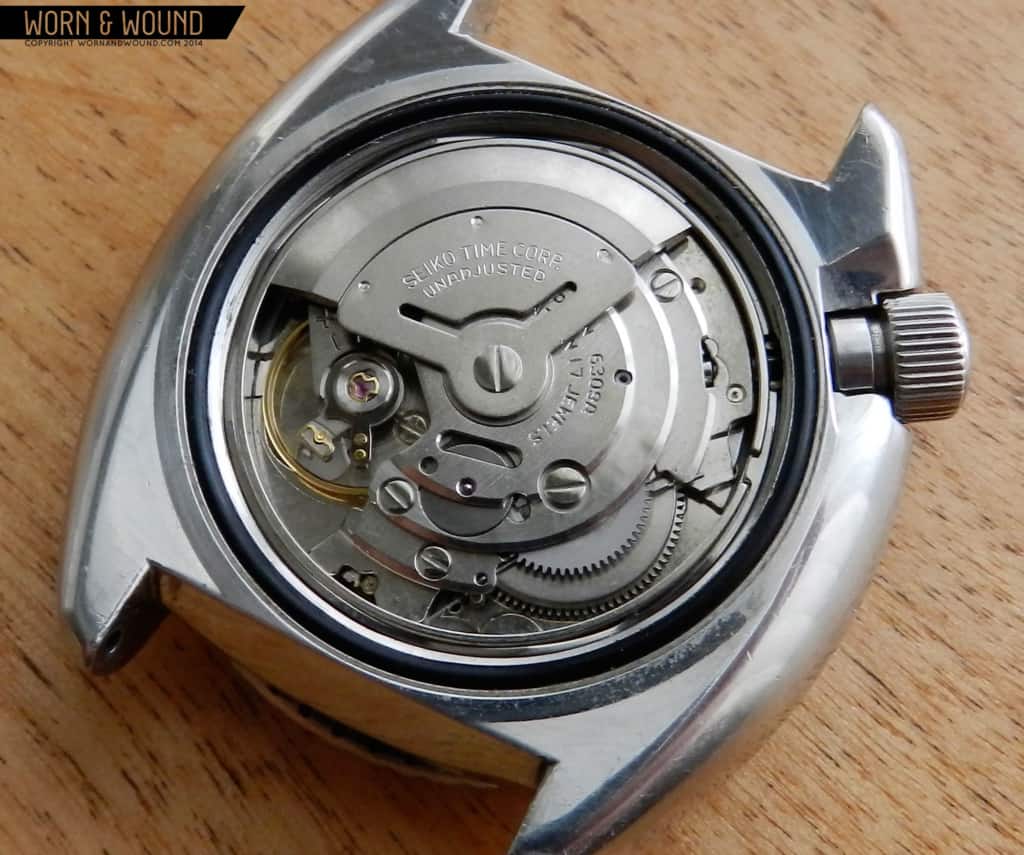 The SRP77x series features a newer Seiko movement–the 4r36 caliber. The 4r36 hacks and hand winds, has 25 jewels, a beat rate of 21,600bph, and 41 hours of power reserve. It’s an incredibly solid movement from Seiko–a step above the 7s26 (which it has been slowly replacing) but a notch below the 6r15, which is Seiko’s competitor to ETA’s 2824. The main structural difference between the 4r36 and the 6r15 is that the latter has a mainspring and balance spring made from Seiko’s SPRON material, which can better handle positional and temperature variance. That being said, the 4r36 can be adjusted to achieve great accuracy if need be. I am often left feeling cold when a brand announces their intention to bring a beloved watch back from the dead. The reality is that most brands get it “wrong,” and contemporary reissues often fall short of the watch they’re paying homage to. Seiko nailed it. They brought the 6309 back with some subtle tweaks that largely make the watch better and more suited to the modern marketplace. And they accomplished this without stripping the SRP77x of its historical identity. And I think the current success seen by Seiko’s latest release is a testament to the relevance of a design that is nearly 39 years old. For anyone not wanting to dip their feet into the murky waters of vintage, the SRP77x is by no means a consolation prize.

Author Ilya Ryvin
Ilya is Worn & Wound's Managing Editor and Video Producer. He believes that when it comes to watches, quality, simplicity and functionality are king. This may very well explain his love for German and military-inspired watches. In addition to watches, Ilya brings an encyclopedic knowledge of leather, denim and all things related to menswear.
ryvini
Categories:
VintageWatches Under $1000
Tags:
6309seikoSRP777
Related Posts
Article / News & Releases

The Return of the “Turtle”: Seiko Brings Back a Classic