There’s something rather refreshing about about the idea of a pilot watch that’s actually made by an engineer who flies. No sense here of gray meeting rooms, slick marketing departments who “reach out” (if you’re not one of the Four Tops, just don’t) or work in “swim lanes.” The new mechanical A-13A couldn’t be more removed from shizzle like this if it tried.

For example, ask Paolo Fanton, the engineer (not marketer) behind the new cog-powered A-13A prototype watch how much it’ll sell for and he’ll say he’s still working on the numbers.  Not the sort of answer you get from your usual spreadsheet-jockey. He’s started this project not because of how many dollars he’ll make, but because he loves it.

We’ve had the prototype of the new A-13A on test for the last two weeks, been able to wear it, use it, and spend far too long swapping straps around on it.  Paolo’s already flight-tested the watch and made several changes (including removing the crystal tint and switching to 316L stainless for the case) before it reached the UK outpost of Worn & Wound Towers. When the first A-13A saw the light of day in 2016-17, it had a 27 jewel, ETA 251.264 quartz motor. Watch people were pretty keen to see this followed up with a mechanical movement. Easy to ask for, but a massive challenge for a maker to meet.

To mirror the functionality of the quartz A-13A, you need to source a movement that runs a central chrono seconds hand. That’s a very short candidate list indeed, now the Lemania 5100 has ticked its last as a production movement. Its supposed replacement, the ETA cal. C01.211, misses the very thing that made the 5100 distinctive — a cam-actuated, direct-drive chronograph showing both seconds and minutes on the main dial.

That really leaves only one mechanical chronograph option, and if it’s good enough for Richard Mille in the RM011 and RM016, Omega, and Audemars Piguet, it’ll do the job splendidly.  That’s a base movement running a Dubois-Dépraz chronograph module. Watchmaker Ashton Tracy has discussed the merits of the chrono module, so there’s no need to re-hash them here. But in this case, rather than the ETA-2824 being the base movement, Paolo has chosen the Sellita SW200.

Sellita used to assemble the venerable 2824 for ETA as well as a lot of Secret Squirrel stuff for posh watch houses, but once ETA declared from behind their drawbridge that they weren’t going to issue movement kits anymore, Sellita had some hard thinking to do. So they decided to build their own near-as-dammit 2824-style movements using non-ETA parts. 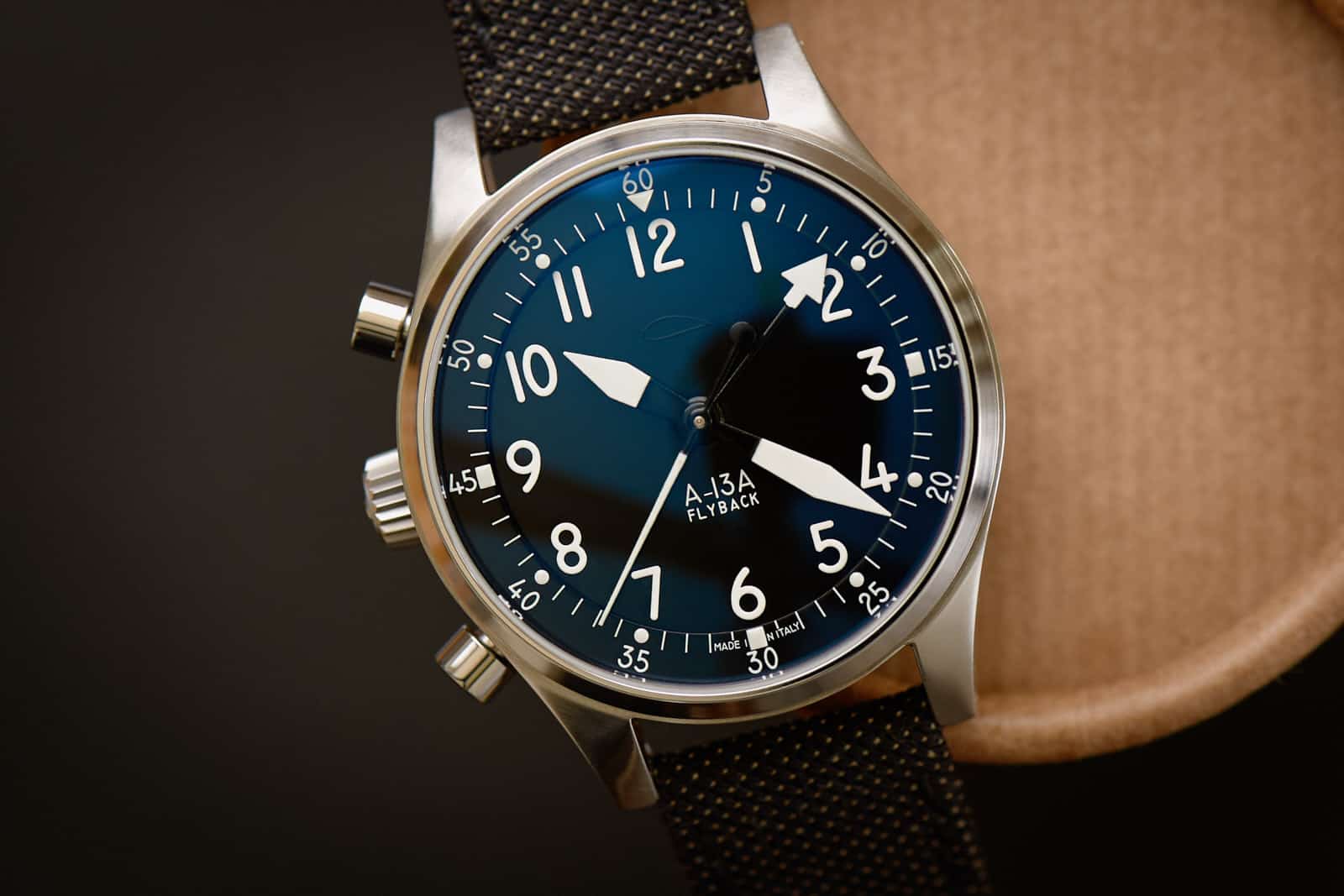 Today, you’d have to be at least something of a movement nerd to spot the difference between the ETA 2824 original and the Sellita SW200, apart from an extra jewel in the self-winding mechanism.  The practical difference is that you have better than a cat’s chance in hell of getting a supply of Sellita movements.

A chronograph module has the advantage of supply — and cost too — but it does mean quite a thick case to house the whole plot. The original quartz A-13A squeezes under the wire at 13mm thick. The new mechanical chrono-module watch comes in at 16.3mm. By comparison, the Damasko DC66 (not exactly the shy, retiring-under-shirt-cuffs type) is just shy of 14mm thick and a Panerai Radiomir 210 is just over 13.3mm.

Paulo says, “I struggled to design a case that doesn’t look so thick by playing with the shape of the lugs and surface finishing.”  The lugs are shorter than the thinner quartz model’s, with a more pronounced sweep to them. They’re drilled too, to make strap changes a great deal less risky and a lot simpler. The case sides are brushed, and some of the movement depth gets concealed with a step under the case side that blends into the caseback. That’s mirrored by a higher, vertical-sided polished bezel. All this fuss about depth isn’t to say a thick watch is a bad thing — far from it. The A-13A has a real heft to it and feels like a proper watch. It’s a tool that’s designed to do a job. Like its quartz predecessor, the design of the prototype watch is based firmly on the A-13A cockpit clock. Dating from the early 1960s, the original A-13A clock gives a pilot both the time and a stopwatch. Run the chrono from the button on the top of the case and wind and set the movement with the knob at the bottom. Anti-reflective glass makes sure you can see what’s going on no matter what the glare in your cockpit. If you’re after one for your Stearman or your Luscombe, have a word with the people at the Waltham Aircraft Clock Corporation in Ozark, Alabama who still make them.

The A-13A clock is about as legible as a timepiece can be.  Given that Paolo spends a good proportion of his time airborne, it’s perhaps not surprising this is his design influence. Like the clock, the watch’s hands and numerals are white against the black dial, each hour is marked clearly with its number and each five minute interval runs on an outer track. The new watch mirrors this faithfully, even down to the shape of the hands.

The quartz A-13A had to use slightly smaller hands, simply because quartz watches put out less torque (rotational force) than mechanical movements, so can struggle to move larger hands.  To be fair, though, you’d need both watches in front of you to see the difference clearly. The chrono module means the crown needs to sit quite low on the case, so there’s sense in putting it on the 9:00 side of the case along with the pushers. It doesn’t dig into your wrist if you’re right handed and wear your watch on your left wrist. For that matter, it’s no problem on your right wrist either. Having its edges slightly chamfered helps too. The crown is still screwdown, but now on an M4 thread, so it’s harder to over-tighten unless you have the mechanical sympathy of a baboon.

The pushers on the mechanical prototype are very different from those on the quartz watch. The mech’s pushers are on splined tubes, so they look a little more traditional. The bottom pusher starts and stops the chronograph with the top pusher acting as a flyback and re-set. Their action is much more direct and crisp than those on the quartz model. The dial numbers on the new watch are applied (rather than painted) which makes them stand out more, not that the originals were exactly shrinking violets, and each of the hour marks is lumed. The mech’s dial drops the gloss black “PILOT WATCH” designation, which isn’t perhaps a huge loss, instead making do with just “A-13A” and “FLYBACK”.

The hands, as mentioned, are larger but they’re also lumed with Super-LumiNova BGW9. This particular pigment is a clear white in daylight but glows with a cold blue once charged.

The mech prototype’s caseback is less stark than that of the quartz watch, with the A-13A wing logo, a real depth of graining, and the proud declaration that it’s made in Milan. 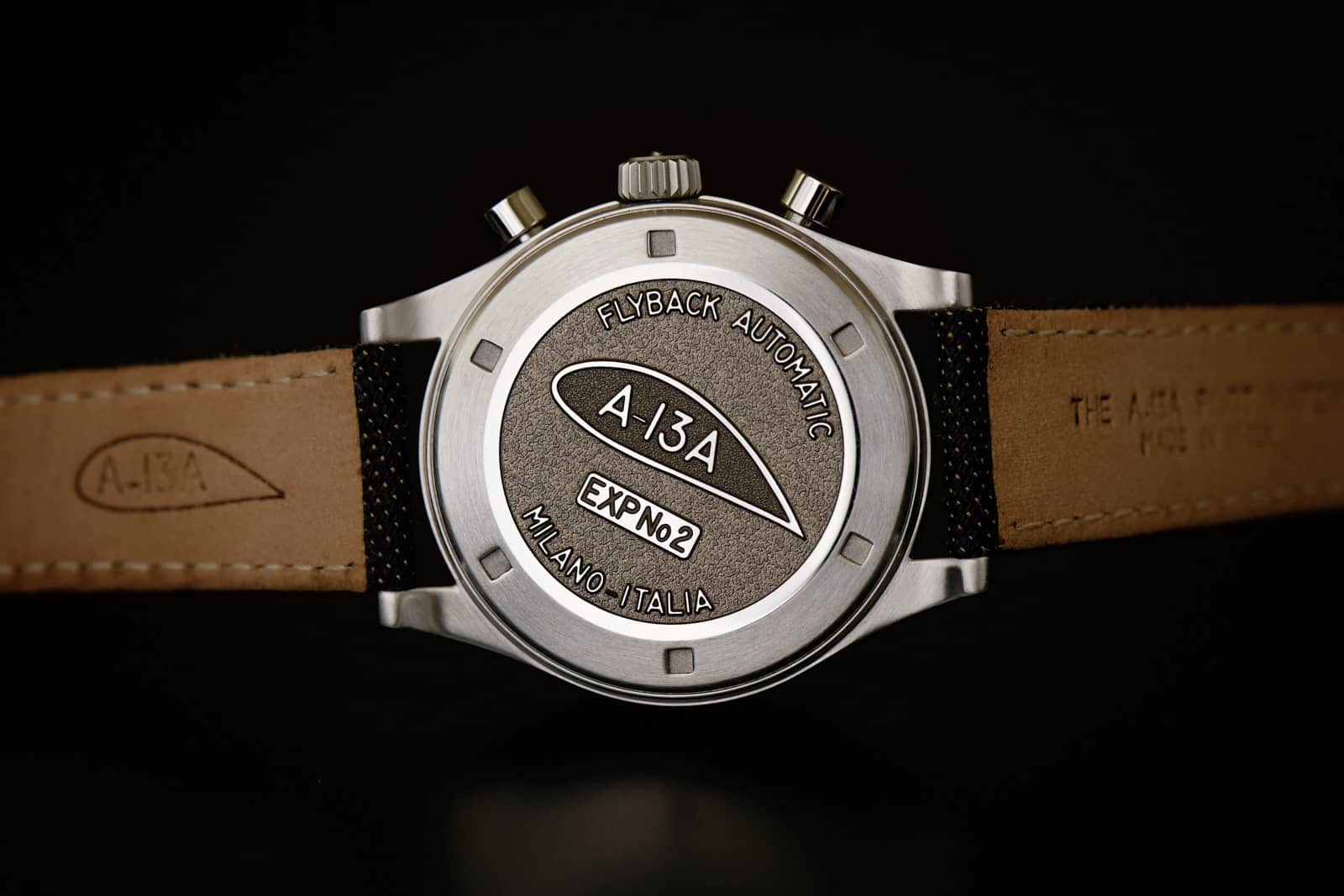 The 20mm strap is the same as the one fitted to the quartz; there’s an inner Lorica facing featuring the A-13A “wing profile” logo and “The A-13A Pilot Watch” stamped on it. The outside of the strap is cordura/kevlar with rubber-reinforced tang holes. The buckle is still in development.

So how close to the finished watch is this prototype? Paulo says. “The mechanical design is 95% finalized, but I have some reservations about the structural integrity about the hub of the seconds hand — but hey, I’m an engineer! If I can offer this watch to the market it will surely be in a revised form.”

Looking at the design spec updates Paolo has sent through (when was the last time a “brand” was open enough to do that?!), it’s clear he’s already put a huge amount of work into the new A-13A. There’ll be more changes to come, doubtless, but this looks like a very high quality watch. With the right price, it would be a very compelling proposition indeed. A-13A