One of our favorite releases from Oris this year was the Hölstein Edition 2021, a limited edition Big Crown Pointer Date that paired a beautiful new dial design with the brand’s new in-house caliber 403 movement. The bold graphic treatment of the dial was referential to a model from the archive dating back to the early 20th century, brilliantly reinterpreted by Oris’ Senior Product Design Engineer, Lukas Bühlmann. It’s an ageless design that works as well today as it did then, and as of this week, is no longer limited to the Hölstein Edition 2021. Meet the regular production Big Crown Pointer Date Calibre 403. The dial features bold, sans-serif Arabic numerals at each hour with a running seconds hand nestled neatly at 6 o’clock, leaving the pointer date hand unfettered at the central hand stack. This is a great execution of this complication, organizing the information I’m being asked to digest into more easily understood sections, with less ambiguity from similar hands and multiple chapter rings. Here, the hour hand gets a clear set of hour markers, the minute hand a rail track all its own, and the date at the periphery. It’s straightforward and legible, which is vital when packing this much information into a slight, 38mm case. Where the Hölstein Edition 2021 received a grey dial, this model gets a dark blue base with clear white markings making for crisp contrast aiding at-a-glance legibility. The heritage is there, but this watch has a modern appeal that speaks to Oris’ “luxury of common sense” theme perhaps better than any in their current collections. Inside you’ll find the new Oris manufacture caliber 403, which brings all the bells and whistles we discussed when introducing the movement, including the anti-magnetism, the 5-day power reserve, the 10 year warranty, and yes, the hidden ‘bear’ in its design. The movement has been regulated to within COSC standards at -3/+5 seconds per day, and looks pretty good around back to boot. In total, a pretty compelling package for right around $3,000. Yes, the setting quirk remains (though not nearly as dramatically as observed in the Aquis cal. 400), and it is rather easily avoided by backing into the correct time with the hands. 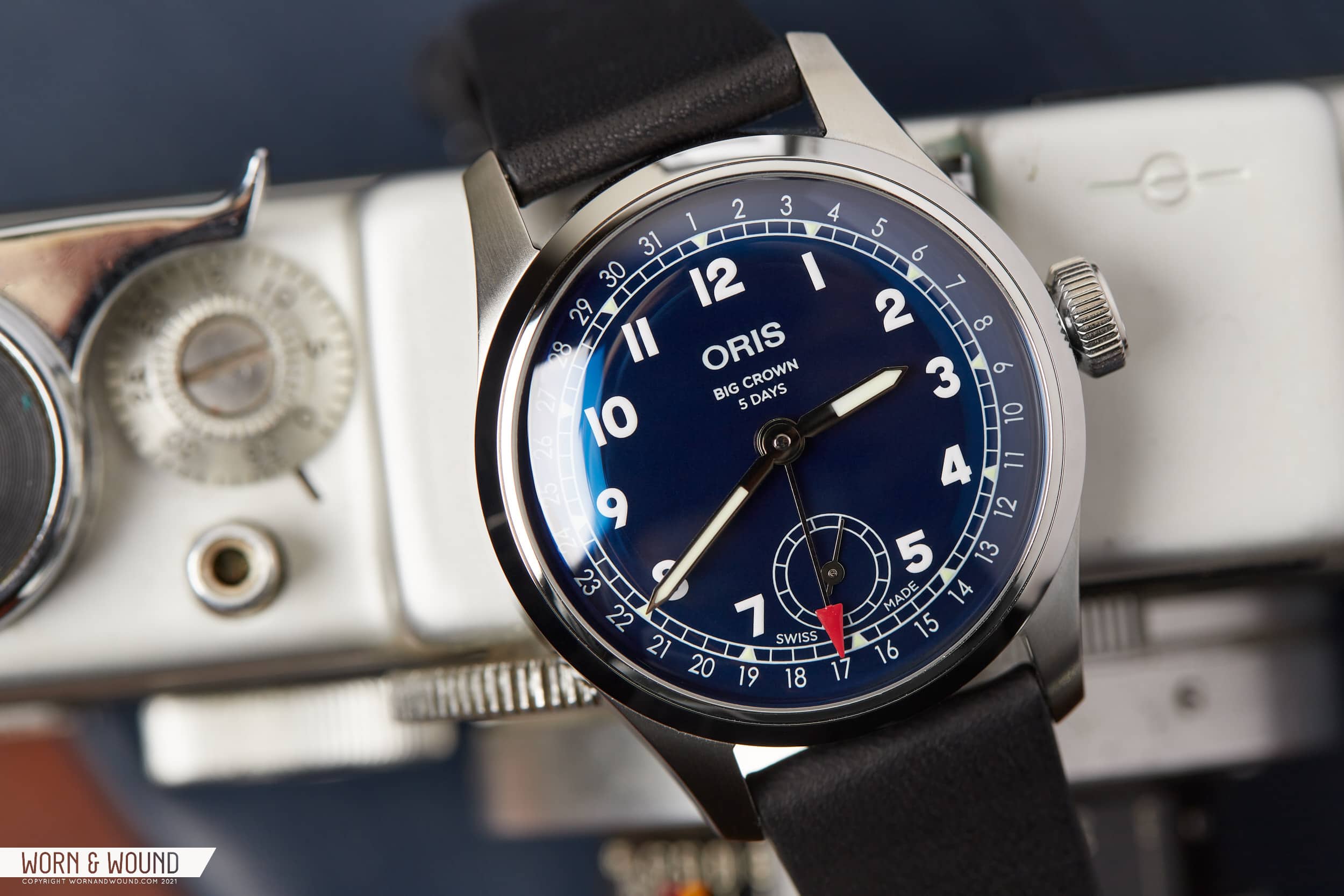 The steel case measures 38mm in diameter and gets a mix of polished and brushed surfaces, including a fully polished bezel ring framing the dial. It measures 45mm from lug tip to lug tip, and 12mm in thickness, including a domed sapphire crystal. As you might have surmised, it wears beautifully on wrist, appropriately disappearing from mind until called upon for duty, making it a great daily wear candidate.

The Oris Big Crown Pointer Date Caliber 403 is available as of today directly from Oris and their authorized retailers, for the price of CHF3,100 (~$3,320). Oris.