We can thank the ‘70s for infusing watch design with a much-needed splash of color. Lucky for us, what began in the ‘70s didn’t stay in the ‘70s, and playful hues have continued through the present to give us options beyond just black and white. Now that we’re in the thick of summer (in the northern hemisphere, anyway), it’s the perfect time to put away everything muted and drab and opt instead for something that embodies the season—and yes, that goes for your watch, too. To that end, the worn&wound team put together a guide featuring nine of our favorite colorful timepieces that are sure to bring some seasonal hues to your wrist this summer.

The Alpina Alpiner 4 GMT “Business Timer” (phew, that’s a mouthful) is part of a collection of professional watches highlighting the importance of preserving glaciers. So why should you be wearing these in the summer? Because these watches will look as good on you at the beach as they would on a snow-covered mountain. The red and blue markings along the top and bottom of the silver dial give the watch a bit of a yachting or regatta feel. As far as sheer functionality goes, the “jumping hour” hand quick-sets in both directions at the first stop of the crown—a way more intuitive way of implementing a GMT function, especially for those who frequently change time zones (and it’s the perfect complication for your jet-setting trip to Ibiza). 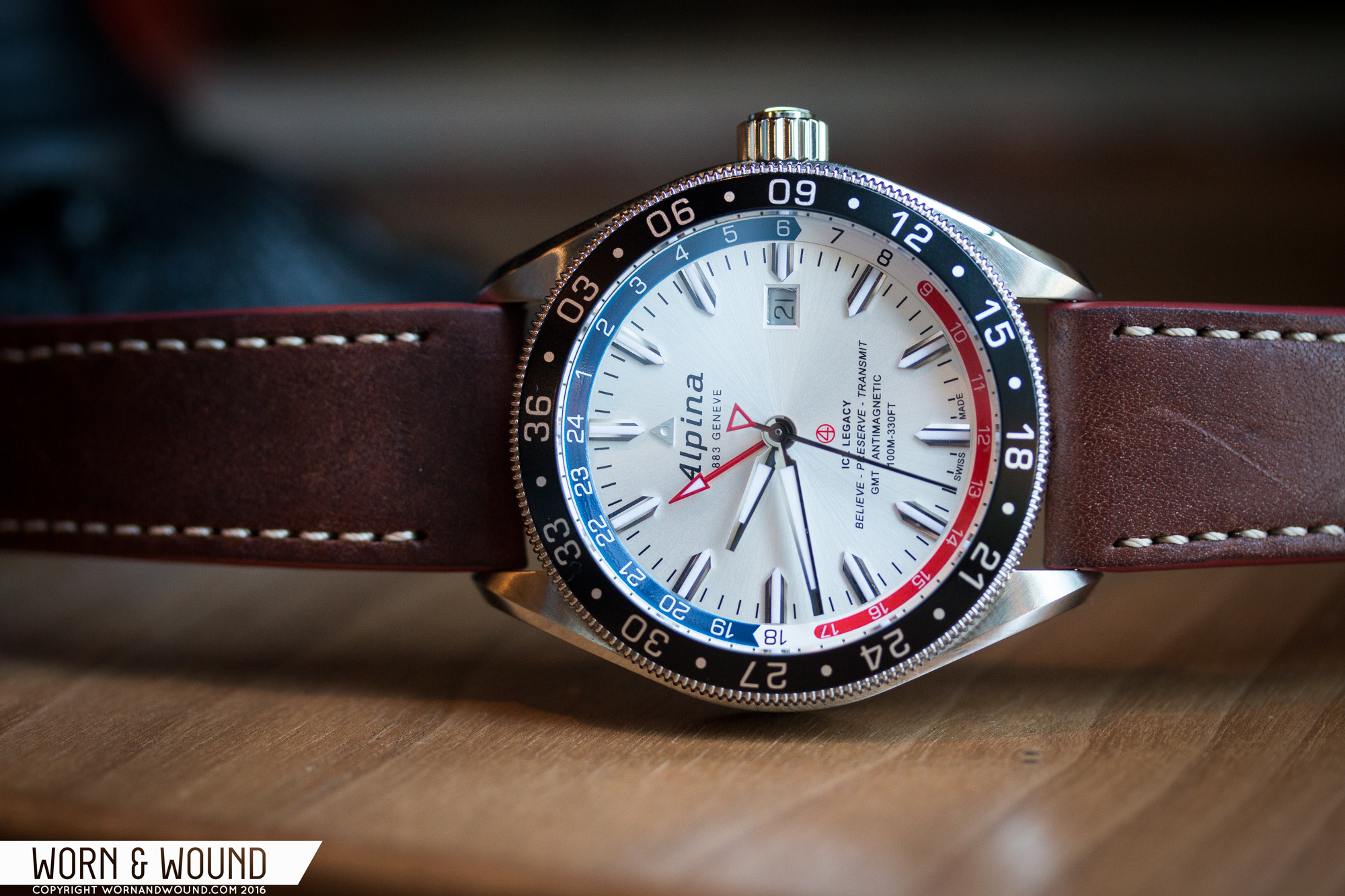 This summer, wear the watch with shorts (that sit above your knee, of course), white Adidas Stan Smith sneakers and a simple t-shirt. Put it on a perlon or nylon mil-strap to really make it the perfect summer beater.

Earlier this year, Bulova unveiled a reissue of the Chronograph C “Stars and Stripes,” a zany-looking, oversized (for the time) chronograph introduced in 1970. The reissue, which looks as though it’s been pulled straight from the archives, is as wild and colorful now as it was when it debuted, making liberal use of red, white, and blue across the dial. The modern interpretation, now a few millimeters larger, has been fitted with Bulova’s high-precision quartz movement. It’s a movement I’m quite fond of and familiar with (I already own Bulova’s Moon Watch reissue). Movement aside, I also picked this watch because I love its ‘70s “all-American” vibe. It’s a statement piece, for sure, but it’ll look right at home on your wrist this summer.

Ah, summer. A time for high temperatures, fun in the sun, and a chance to add a little bit of looser, brighter style to your wardrobe. With that in mind, my choice for a colorful summer addition is one of my favorite pieces of last year–the Martenero Edgemere. In addition to providing stellar casework and finishing for a watch in the $500 price range, the four different variants of the Edgemere offer four different ways to add miles of all-American charm to any outfit. The teal/silver version and the white/red variant are particular favorites, both for entirely different reasons. The teal/silver variant is for the more subdued man, playing heavily with textures and polishing but adding just a hint of colorful blue pop. The red version, on the other hand, is a perfect subversion of the classic nautical navy, white, and red combo. It’s a colorway that would set the wearer apart from the rest of the Americana prep crew while still looking like it completely belongs. All in all, the Edgemere is a difficult proposition to beat for those looking for a reasonably priced summer watch with a touch of color, especially one that works this well as an all-purpose daily wear.

So you want to add a little color to your summer wristwear, but you still want a bad-to-the-bone tool watch with vintage DNA? The DOXA Sub 300T-Graph Professional with a sapphire bezel has all of your bases covered.

DOXA introduced their orange-dialed diver in the 1960s, and it has been a dive watch icon ever since. The T-Graph continues that tradition with a bright orange dial, but adds another splash of color with chronograph sub-dials bordered in colorful rings. The sub-dials at three and nine have alternating black and yellow rings, while the one at six is just black. Furthermore, on this particular model DOXA eschews the traditional decompression bezel for an elapsed time sapphire insert that is orange and black. At 45mm wide and 17mm thick, this is not a small watch, but neither is it so big as to be unwieldy. The ETA 2894-2 movement is robust and reliable, so no worries in that department. It comes supplied on a robust solid-link bracelet, but if you want to add even more color, you could rock it on an orange or yellow mil-strap for even more pop. This 500-piece limited edition will set you back just under $3,000, so it’s definitely not for every budget, but it’s one that is worth the money, for sure.

My love for Stowa’s Antea collection is well-documented, particularly for the line’s more classic offerings. But in recent years I’ve also warmed to the Antea’s back to bauhaus “b2b” series, which takes that classic template I love so much and gives it a major facelift. Other than the new font, the biggest shift here was the infusion of color, bringing breezy, low-saturation pastels into the mix. There’s green, brown (really more of a tan), pink, and blue where there was once only black and silver.

Of the group, I’d go for the blue in 35.5mm with the small seconds function–a watch I could easily see myself wearing daily. It’s not a go-every, do-anything sort of watch (it’s a bit lacking in the water resistance department for that), but it’s perfect for wearing about town. Throw this one on a perlon strap and you’re good to go.

Ok, so at first glance the Meister Driver Automatic from Junghans looks a bit too bright, and possibly more feminine than unisex, but if you swap out the red strap it comes on for something a little less bold it would make for a versatile summer watch. The combination of black framed hands, large red-framed numerals and a black minute/hour track adds plenty of contrast and color to the dial (though the whole thing is kept subdued because the colors aren’t too intense).

The sand-colored circle in the center of the dial and the smaller circle around the date window at six complete the speedometer look–but think more soft-top on the Pacific Coast Highway rather than performance machine on the Nürburgring. The Meister Driver series features both hand-wind and automatic movements, and this one is equipped with the J800.1 calibre, based on the ETA 2824-2. The case diameter is 38.4mm and it comes in at just under 10mm thick, so it’s relatively small and svelte. In terms of strap choices, I think a matte black leather would tone it down yet still let the playful dial pop a little, or a sand colored mil-strap would make for a great casual summer combo.

Half the fun of watches is the way they do ordinary things in interesting ways. Take world timers. In as long as it’s taken you to read this, you could have downloaded an app that will tell you the time to the atomic second, anywhere in the world. Efficient indeed, but with all the romance of an airport cheese sandwich. Alternatively, you could take a glance at the Nomos Zürich Weltzeit on your wrist, push the button at two o’clock a couple of times and find out the same time, but with rather more style. Now, the original Weltzeit had a plain jane white dial. The nachtblau (or “midnight blue”) lifts the whole plot with one of those tiny Nomos details that transform their watches. The original ‘Zeit had a simple ‘heimat’ to indicate your home time zone. The nachtblau uses a tiny red house symbol and a pointer instead–but those tiny touches of red move the watch from functional to funky. What you have here is a subtle application of color, ultimately a bit more somber than some of the other watches featured in this guide, but it’s a look that will carry you well past summer and into the rest of the year.

Autodromo’s Group B watches pay respect to one of my favorite eras of auto racing, where rally cars–turbo-boosted to absurd points–hurtled down dirt roads. Eventually deemed too dangerous for both competitors and spectators alike, Group B was shut down only to live on in our memories. Autodromo’s watches capture that sliver of time, with the bold use of color on the dial reminding me of the bright graphics of the race cars and the garish driving suits worn by their pilots and navigators. Combined with a slim titanium case featuring fixed lugs and a workhorse Miyota movement, the Group B is a fun, lightweight sports watch. If I were forced to choose, my pick of the lot would be the yellow variant, which reads more like a burnt orange. It’s loud as hell and ready to go, just like the ripsnorting Audi Sport Quattro Rennwagen it reminds me of. Time for a drive.

With summer being a yearlong season here in Singapore, we have an excuse to visit the beach at nearly anytime of the year–weather permitting of course. Dive watches are basically a necessity. And given the popularity of Seiko here in Southeast Asia, we frequently get many great limited edition models to choose from (it’s okay to be jealous).

Just this past June, Seiko’s distributor in the region released a limited edition green variant of the Seiko “Scallop/Baby Tuna” ref. SRPA99K1, nicknamed a rather self-explanatory “Green Sea Turtle.” (Man, that is a lot of nicknames!)

As the nicknames suggest, this watch comes with a ceramic shroud and a stunning green sunburst dial. Despite its hefty 50mm size, it’s quite manageable given the short, hidden lugs (read our recent review of the Seiko “Tuna” ref. SBBN031 to see how that’s possible). Its Prospex pedigree absolutely guarantees that it will keep on ticking long after its owner expires diving in the depths of the murky sea. Coupled with the legendary lume that Seiko is renowned for, a bulletproof 4rxx movement, and an affordable price point, this watch is a strong, colorful contender for wrist space this summer!

Author Worn & Wound
This is the house account for Worn & Wound. We use it on general articles about us, the site and our products.
Categories:
FeaturedGuides
Tags:
AlpinaAutodromobulovajunghansNomosseikoStowa
Related Posts
Review / Watches Under $1000